Another low-budget title released digitally for multiple platforms, Fullblast also landed on the Playstation 4 in retail form to deliver twelve stages of shooting action. While flashy enough to provide fun for children and newcomers to the genre, it will probably make everyone else snooze when playing, as it honestly did to me a couple of times. In short, don't expect any sort of real excitement if your idea of shmupping is being challenged with exhilarating dodging as you fly through lots of varied environments.

In the world of Fullblast the player is sent to battle in order to fight alien invaders that have infested planet Earth. Each one of the three environments (city, forest, ocean) gets increasingly more wrecked by the creatures across four levels: in the first three regular bosses appear to stop you, whereas a giant alien creature awaits at the end of every fourth area. It's a very straightforward structure whose best feature is certainly the basis for the enemy gallery. Pretty much all enemies are insects, with a few marine creatures thrown in amidst the expected assortment of mandatory turrets. Other than that, every once in a while the scrolling halts so that you can face a turret mid-boss surrounded by regular minion waves. 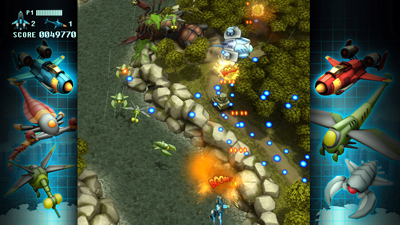 A river raid over the jungle

Before delving into the actual gameplay, it's interesting to note that the game visuals are somewhat decent. Graphics are clean and quite detailed in the way they try to convey terrain raided by alien creatures. You see cars going back and forth, boats and ships adrift at the mercy of the wind, bridges and facilities destroyed by derelict motherships. The only problem is that the game is very repetitive and never picks up the pace, so no matter how cool the graphics look soon you'll get tired of them. Repetition is also the main issue with the soundtrack and its generic hard rock themes that make no lasting impression on anyone.

Shot and bomb are the only commands you'll ever use in Fullblast. Once the ship (or ships in co-op play) takes flight and enters the first area, items will start appearing at random as you destroy your enemies. The pea shot can be upgraded by taking the appropriate icons for straight shot and spread shot. Pick up three items of the same type to max it out, and watch as a slow automatically firing heat-seeking missile appears in the last upgrade. Other items include extra bombs, extra lives, energy refills (heart), temporary score multiplier (2×), temporary rapid fire (arrow), temporary shield (S) and a bogus pick-up that lowers your firing rate for a brief while (a spiky red ball). Some of these items tend to get mixed with the colorful backgrounds, so keep an eye out for them.

The energy refill mentioned above recovers part of the health bar that comes with each life, which takes a lot of beating to get depleted. The levels themselves aren't much of a threat, but the ramming and spraying attacks of some bosses can take you by surprise the first time you get to them. It takes only one encounter to memorize patterns though, so the little pressure there is soon disappears and gives way to more boredom. Speaking of which, stretching out levels in order to obtain a longer game is what Fullblast unfortunately does best. The game allows you to select a starting stage from those you've already reached, but what's the point if two thirds of them are essentially the same?

A valid way to describe Fullblast is that it's a slightly improved take on the style pioneered by developer/publisher Phoenix Games, who were the European kings of crappy releases during the PS2 era. Those who know what I'm talking about will immediately recognize the similarities. The game's got many long levels with little to no variation in the enemy gallery, as well as repetitive design and completely forgettable music.

I was expecting the creature from the box art to be one of the bosses, but he's just a spore-spitting worm that appears halfway into the jungle area. It's the same attack from the carnivorous plants, in what's commonplace behavior for many other enemies. At least the scoring system isn't stupidly broken, and exploiting the time given by the 2× score multiplier is the only way to actually try to score higher.

The picture below shows my best completion results when playing on Normal difficulty. Beware of pausing: I had the game freeze on me once when I paused almost at the same moment the pre-boss message appeared. It was impossible to unpause or even to close the game through the PS4 interface! 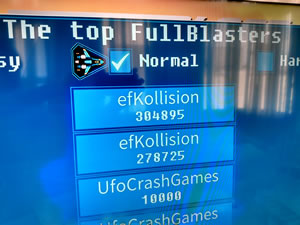