Dear readers, I have come full circle. Back in 2005, during a trip to Los Angeles, I decided to bring back home a few second-hand PS2 games, among which was Gradius V. It didn't take long for me to realize there was something special about it. Forget fighting games, racers, whatever was mainstream at the time. For a long while Gradius V was the only game I played, years before I would turn into a shmup case. It blew my mind like few other games did. And you know what's most interesting about this? Believe it or not, I had never played any Gradius game in my life.

So here we are, my finally emerging victorious after having previously gone through the whole series and its main ports. And the feeling of wonderment when reaching each new stage in Gradius V still felt like those good old days. It's been a long time and a long ride since the very first experience I had with Gradius on the NES more than ten years ago, which makes me somewhat proud for this journey and willfully waiting for the day Konami decides to finally bring a sixth chapter to fruition. No, I'm (still) not too old for this shit, as our dear Roger Murtaugh would put it.

After the cruel yet awesome arcade-based Gradius IV, Konami decided to partner with Treasure and bring the franchise to the home market, more specifically the Playstation 2. Taking advantage of the console's capabilities, both companies delivered a truly epic shooter that encompasses everything that made the series such an iconic name within the genre. Gradius V not only expands on the ideas of old, but it's also beautiful to look at and a delight to play, with a marvelous soundtrack that puts to shame most sci-fi movies out there. It's a mandatory experience for all shmup fans and probably the most accomplished of all horizontal shooters I've ever played.

The first and most important gameplay aspect that differentiates this chapter from the previous games is the absence of checkpoints. FINALLY, many people would say. On top of that, there's no moai stage to be found here. That speaks to my senses a great deal, since I was never a fan of moai. Good moai is dead moai!

This is Vic Viper T-301... commencing attack on the enemy
(courtesy of YouTube user kirgeez)

Once you've chosen the desired type of weapon array, Gradius V begins with the speedy departure from a space station as an original Big Core tries to stop you. Powering up follows the tried and true standard of the series, with upgrade capsules appearing from destroying either full enemy waves or orange-colored enemies. Press the dedicated button to activate the highlighted upgrade, it's as simple as that: speed-up, missiles, double/tailgun, laser, option/multiple and shield/force field (there are variations, but these are the most common ones). Shot and missile can be either mapped to the same or to different buttons, with rapid fire functions as well. The occasional gray capsule works as a smart bomb that clears the screen from minor regular foes, but they don't give you any points when dying this way. Speaking of which, the first extend is granted with 300.000 points and further ones at every 500.000 points afterwards.

New to Gradius V is a fourth input that affects the behavior of your options. Type 1 freezes them in place as you move, type 2 allows you to aim your shot direction but doesn't allow you to move, type 3 expands/contracts your option arrangement vertically (as in Thunder Cross) and type 4 makes all options rotate around the ship. Each type of multiple control comes with strengths and weaknesses, but very soon I decided on type 2 since it allows all sorts of stunts when using the laser. Many people refer to it as a "whipping" laser, which makes perfect sense as an alias to the visual spectacle provided by a fully powered ship wreaking havoc everywhere. Weapon edit is unlocked when you complete the game, allowing players to choose from a wide selection of staple and brand-new attacks when composing the weapon array.

Moving forward with the series while being faithful to its original style is something that this chapter excels at. Graphics are beautifully textured with awesome 3D depth, oozing with colors and dynamic transitions. Explosions abound, and well placed voiceover messages enhance the experience of piloting the Vic Viper T-301 spaceship across each one of the eight stages. The number of levels sounds odd considering that Gradius V is a massive undertaking where a full credit often clocks at more than one hour. All stages are of decent length, but the 7th level inside the enemy fortress takes the cake as the longest final level in the series, and also the most nail-biting alongside the final fortress of Gradius III. The reason for the 7th level being the longest and Gradius V still having 8 stages is a neat story twist that leads to a more suitable epilogue than some escape sequences seen in a few previous chapters and spinoffs.

Raising the bar graphically wouldn't be that much of an accomplishment had the game not increased the difficulty in the same measure. The result is a highly addictive, larger-than-life adventure that does away with the punishing nature of Gradius III and Gradius IV but still packs quite a punch in terms of challenge. Gradius titles were never known for their mercy, but they were also very methodical in how players should approach each and every checkpoint. However, with checkpoints out of the way the developers were then free to heighten bullet density to a point where it became feasible to decrease the hitbox of the ship. That brings about several moments where you need to fit into very tight passages and sections that definitely feel bullet hellish in nature. One of the highlights in that regard is the whole meteor level (5th), which requires strong crowd control and lots of nerves during an overwhelming boss confrontation. This particular stage, by the way, serves as a mixture of all moai/crystal motifs seen in previous chapters. Its pure, raw, unmitigated intensity is one of the reasons that made me fall in love with this genre a long time ago. 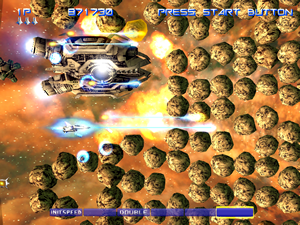 On the lookout for Blaster Cannon Core

If you miss moai at least you'll be at home with a few other franchise acquaintances that return in great form. As expected, the organic level (cell) screams Salamander all over the place. The enemy base in the following stage is filled with a deadly green mist while the base itself tilts left and right and even scrolls backwards. It's like a bubble stage meets the magma level from Gradius IV, even though no volcano preamble is to be found here as well. What you will encounter are lots of bosses, old and new, either waiting at the end of the levels or lining up in several boss rush formations (stages 2, 6 and 7 have multiple bosses). Boss fights get increasingly tougher, a sign of the finely tuned difficulty slope that makes each new level feels like a clear challenge leap. And let's not forget about rank and the random appearances of the option thief when rank is maxed out. Dying does reset (or reduces considerably) the ongoing rank though.

The only aspect that wasn't fleshed out properly in this game is the scoring system. Once more it's just the straightforward "kill everything" rule, with no variation whatsoever. Each power-up capsule is worth 800 points and hatches can be left in one piece for a while to release more drones, but that's it as far as extra scoring opportunities go. Some people complain about the unskippable cut scene at the start of the second level, but in my opinion it's a harmless short delay when you think about the grand scheme of a full credit.

Besides being an outstanding game in all technical fronts with absolutely no slowdown at all (except for cosmetic explosions on bosses), Gradius V also boasts flawless presentation, with an awesome animated intro and a slew of training options that are unlocked the further you dig into the game. Stage select/practice can be broken down in virtual checkpoints that help deal with huge levels such as the final fortress. When returning to the game after all these years it didn't take long for me to get past my previous nemesis Covered Core MK II, the main boss of stage 6. How foolish of me to think I was close to success though. What comes afterwards soon brought me back to my humble self, making me practice even harder than before to achieve victory.

To wrap things up, all I can say is that I absolutely love Gradius V and recommend it to anyone looking for an amazing shmup experience (co-op play is a blast too, I can certainly vouch for it). In choosing type 2, my basic strategy when playing solo was to upgrade as fast as I could to achieve max power by the time I reached the first boss. I used two speed-ups for the whole game, activating a new one only during the high speed part. I played on Normal difficulty and reached stage 2-1. Further loops add suicide bullets and new attack patterns to key enemies. 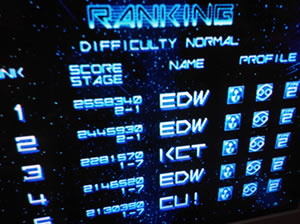