Horizontal
Checkpoints OFF/ON
3 Difficulty levels
8 Stages
Ship speed by icons
- - - - - - -
Developed by Cyber Rhino Studios
Published by Strictly Limited Games in 2018
Funded by a successful Kickstarter campaign and aimed at an initial release for Windows/Mac PCs in 2015, Gryphon Knight Epic soon made its way to several other platforms including the Playstation 4. Eventually it got picked as the second retail title by Strictly Limited Games, and ever since my copy arrived I wanted to see how well the sprite-based fantasy aesthetics applied to the shmup style of play. After being foiled by a few horrid impressions from brief contacts I finally had the chance to invest some time into it last week, learning what was necessary to go from beginning to end in a single sitting.
Very inspired by swashbuckling stories and movies, the story in Gryphon Knight Epic plays a large part in the overall experience. Fortunately you can skip all cut scenes and dialogue snippets by pressing ○ (being able to disable the dialogue in the options would've been much better, but that's not the case and you can't remap buttons either). The cartoony visuals are an obvious throwback to the 16-bit era, the charming old school graphics are a great asset for nostalgia's sake and the innocent humor that comes along with it is certainly welcome if you don't mind scrolling though endless pieces of text.
Infusing the gameplay with RPG-like mechanics is a much more debatable design decision though, one that doesn't quite gel with the expectations of diehard shmup fans. My initial fear was that it would actually lead to some sort of mandatory grinding, but fortunately that's not the case. You can still grind your heart out to Gryphon Knight Epic if you want to, of course, if only for the chance of controlling sir Oliver, the titular hero of the game, with half-decent speed and maxed out weapons from beginning to end. Everything is so painfully slow and clunky when you begin that you'll need to adapt your sensibilities to the game's rhythm if want to have any fun with it. 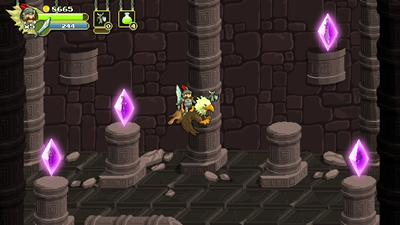 Passageways to rematches against bosses
Starting the game will send you directly to a tutorial section that serves the purpose of explaining the basic inputs and showing the beginning of sir Oliver's quest for justice in a medieval land dominated by evil creatures. Button □ shoots, button ○ switches shooting direction, button × fires the special weapon and with button ∆ Oliver drinks whatever potion you've decided to use. Once you have acquired more than one special weapon, L1 and R1 cycle through the available ones. Lastly, either by holding Δ or pressing the touchpad you have access to your whole inventory for potions, weapons and squires.
Once the tutorial is over, head to the market in the map to purchase the dragon squire and fly away to one of the next available levels. With the first upgrade of the default crossbuster weapon you can shoot a charged shot that doesn't consume weapon energy (it's the only weapon that behaves like this). Weapon energy recovers automatically when used, whereas in order to recover health you either need to use a green potion or collect green gems. Other gem colors with special benign functions exist but are quite rare to come about, and most of them will actually be yellow gems that serve to increase the level of your squire (the dragon squire shoots 3 very helpful fireballs when maxed out). If you get hit you lose one level of the squire's power, on top of losing some health of course.
In every stage sir Oliver must defeat two bosses. The second one will always give him a new weapon upon defeat, which Oliver is able to use at will in the following stages. Comparisons to Mega Man are justified here, even though you'll need to choose between two levels only as you start, advancing to four choices after you complete the second level. Besides the default crossbuster you'll also acquire a sword, a bow, a staff, a sling, a lance and a fireworks cannon. Some of them aren't really of much use though. My favorite was definitely the sword for its ability to fire large arching shots that block bullets, even with its egregiously slow firing rate and speed.
Every single enemy that's killed gives the player a certain amount of money. You don't need to pick up coins or anything similar since money registers automatically in the appropriate counter. Killing enemies within a certain interval between each other without taking damage increases money value up to a ×3 multiplier (note that money gain varies depending on the difficulty you choose for each stage). Money is used to purchase items and weapon upgrades at the market and the wizard's shop. Every time you die you lose 5% of all your money, and that's pretty much the only real punishment you get from performing poorly. Lives are implemented awkwardly: in the normal difficulty you get a constant supply of six lives to play any game section, so no matter how many you've lost before advancing you'll get another six after you beat any boss. Game overing is pointless because you preserve all your gold and play any stage again as if nothing had happened. Besides, you can leave any stage at any moment and go back to the map to choose another stage or start again.
Console launch trailer
(courtesy of YouTube user and developer Cyber Rhino Studios)
The disregard for the mechanic of lives is understandable, after all Gryphon Knight Epic was not designed with an arcade mindset. Each play session has its own save slot, to which you can come back at your own time in order to get more money. The idea here is to obtain every single item and weapon in the game, completing all levels in the hardest difficulty in order to unlock the ultimate weapon and the most satisfying ending. The game doesn't have any scoring whatsoever, but even if we were to consider money as score we'd still have a broken scoring system (you can exploit enemy projectiles in certain areas ad infinitum).
There are some other gameplay aspects that rub me the wrong way. Switching shooting direction with button ○ feels awkward because it also shifts the scrolling direction if you're flying left or right (not up or down, for that you must hold the desired direction for a few seconds). Every once in a while the screen halts so that you can choose a scrolling direction. Normal progression is always indicated by the pointing finger, but watch out for secret passages hiding magic runes that grant Oliver special enhancements such as the ability to fly underwater, unlock larger meters for health and weapon power, fly faster or get reduced prices at the shops. The bad news is that the most helpful ones can only be found in the hardest stages, so you're stuck with that sluggish gryphon and the sensation that you're plowing through mud throughout the whole game, taking inevitable damage all the time for being sorely underpowered.
My self-imposed challenge in Gryphon Knight Epic was to beat it on Normal (Knight) difficulty without replaying any level. The only weapons I upgraded were the crossbuster (max), the Qamar sword (level 2) and the Eben sling (level 2), refilling my stock of green potions in between levels. All secret runes were collected except for the one that gives you a dash move, which is more annoying than actually useful. I considered my "score" to be the money cumulated after beating the final boss, shown in the picture below. According to my save stats at the end of the credit the run lasted 2 hours and 2 minutes. 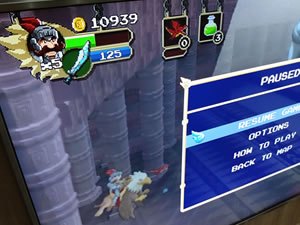