The gimmick is already in the title. And even though it doesn't quite work the game is decently paced for 16-bit standards, which is nothing less than one would expect from a shooter by prolific Naxat Soft. Is it fun, however? W Ring - The Double Rings draws many ideas from the classic formula of Gradius in order to deliver a reasonably varied space adventure, even though it tends to fly low in the radar of shmup fans due to a combo of design + gameplay that on the surface doesn't do much to go beyond what most people would call average.
Fairly simple controls are used here. Just shoot with button II and choose from three speed settings with button I. There's no backstory and no preamble anywhere, so go ahead and blast enemies across six levels (or seven, depending on how you interpret the way the final boss section is laid out), collecting upgrade items along the way to save your universe from annihilation. The rings mentioned in the game's title circle the ship and hover around it as you move, theoretically powering your weapons while also serving as a deflector shield for incoming bullets.
Bouncing bullets with the rings comes with a nice metallic sound effect, but I couldn't grasp how to properly do that and not get hit. After a while I just gave up and considered this mechanic as a good luck charm during the most claustrophobic parts of the game. 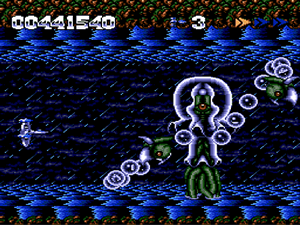 The welcoming arms of the 3rd boss
As I mentioned above, several environments in W Ring are modeled after Gradius games. The first level in a cavern setting is filled with cannon fodder and disintegrating rocks, while alien insects and destructible nets populate the second level and mirror the second stage of Gradius II. There's also a high speed section in stage 5 that serves as main gate to the death hole of the final stage. The most visually attractive level, however, is the third one and its waterfalls above and below amidst constant rain. An interesting detail is how the splitting orbs in stage 4 predate a concept that would become one of the visual highlights of Konami's Xexex. Most stages also span a wider vertical area than the screen space, a rather unusual trait for console shooters at the time of the game's release.
A bare ship is capable of firing a single straight shot and air-to-ground missiles. When the power-up carrier is destroyed a floating orb appears, switching colors starting from purple. Once the third orb is collected you reach maximum power and that happens regardless of color, so there's no need to stick to the same color to power up the ship. Whenever you've gotten at least one power-up you don't die when hit, with the ship reverting back to its default firepower instead. That's the condition that results in death if a bullet hits you or you crash into an obstacle.
Choosing from the weapon types available requires some timing skills because the power-up cycles colors relatively fast. In their maxed out forms you get an 8-way shot (purple), a set of straight lasers (blue), the default shot with two streams of missiles with mild homing ability (yellow), a straight ring-shaped shot (green) and the default shot complemented by four invincible trailing orbs that block bullets (red). Finding a favorite weapon in W Ring doesn't take long, and my two choices were always the yellow shot for its devastating effect when point blanking and blue because those lasers will pierce through anything, including walls.
Caverns of Saturn in the first level
(courtesy of YouTube user Jesper Engelbrektsson)
Besides the regular upgrades the game also has three types of hidden items, which are uncovered by shooting at corners and tips of the scenery. B is a score bonus token that's normally worth 15.000 points, the interrogation mark (?) makes the missiles fly forward instead of downwards/upwards and EX sends the ship into an alternate version of the level. Alternate stage versions come with different color palettes and can be hit-and-miss regarding difficulty and scoring opportunities. The only ones I'll take are in the first and fifth stages (the latter comes with lots of uncovered B items that are worth less than normal but still give you a lot more points than the regular course). The first score extend comes with 200.000 points, the second with 500.000 points and all further ones at each 500.000 mark.
W Ring - The Double Rings sort of rises above the failed attempt at providing a different gimmick due to the reasonably balanced intensity of the gameplay, except for some bosses that go down in mere seconds if you're using certain weapons. One thing that sort of bothers me is the fact that you're always respawned in the lowest speed setting, which can lead to confusion when you most need speed to go on. Bullet visibility also tends to become an issue during loops or when playing at a higher difficulty. Scoring is pretty straightforward and mostly boosted by collecting B items and excess items of the same color, as well as taking the EX routes. As for the music, I found it rather ordinary with no standout tracks whatsoever.
When the game is beaten we're made aware that the mission actually started in Saturn and proceeded towards the outer boundaries of the Solar System, just before a new threat appears and you're drafted into battle again for the second loop. There you need to cope with a lot more bullets, including those of the suicide kind when medium and large-sized enemies are destroyed. Here's my final score on Normal difficulty, reaching stage 2-6. 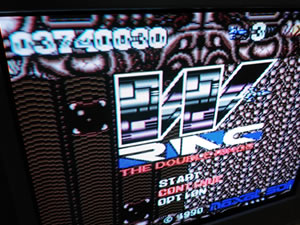