The last game in the TwinBee franchise to be published as a Famicom exclusive, TwinBee 3 - Poko Poko Daimaō never made it to Western shores as did Moero TwinBee / Stinger. Perhaps Konami had a gamer like me in mind when dealing with the series out of Japan, after all I never really cared about its gameplay and the whole concept of a cute'em up where you're supposed to be juggling bells at all times. There's something about this mechanic that doesn't quite click with me in the first entries of the franchise (my perception about future chapters such as Pop'n TwinBee is vastly different though).
That said, one of the most important things to be said about TwinBee 3 is that it returns to the roots of the series by offering vertical stages only, as opposed to the mix of horizontal and vertical levels seen in Stinger. In Famicom terms it plays just like the original TwinBee, only with some changes here and there. Cute and surreal enemies storm about from everywhere in the most erratic movement patterns amidst clouds that release colored bells when shot at. Commands are the basic combination of shot (button B) and ground bombs (button A), but a turbo controller comes in very handy since the game lacks autofire. 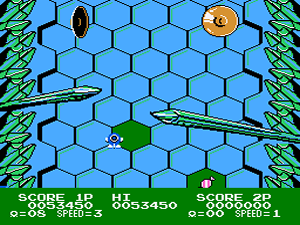 Lots of hive-like terrain ahead
Trying to go all the way with the default pea shot in a snail's pace is of course not the correct way to enjoy the game, so one of the first actions you need to take is get a blue bell for a welcome speed boost. The main bell color is yellow, with all other colors appearing after they take a few shots. However, in TwinBee 3 the amount of bells initially generated in blue color is considerable, so flying fast can actually be quite hard to avoid at times. In fact, the feeling I got in this chapter is that it's quite easy to get multiple speed-ups and start moving at breakneck speeds all over the place (the HUD even keeps track of the amount of speed-ups you get).
Keep hitting the bells to see more color variations besides yellow for the following functions: blue (speed-up), white (double shot), red (piercing laser shot), flashing red (trailing options) and flashing blue (shield barrier). Yellow bells serve the single purpose of scoring since for each one grabbed without letting any go down the screen you score 500, 2.500, 5.000 and then 10.000 points (max). Other bell colors do not influence the yellow bell combo, so there's no need to rush in order to juggle a blue bell that's far away or almost out of reach.
Besides the bells, other items can be uncovered by destroying ground targets with bombs. Most of them, such as fruit and money, result in a few extra points, but some items yield better rewards. The bottle gives an extra life, the candy gives you a 3-way spread shot, the question mark might destroy all on-screen enemies (not always), the match sets fire to the next bell for a lengthy period of invincibility and an old man's head gives access to a bonus cloud area once the stage boss is defeated. The old man is actually dr. Cinnamon, the game's villain who has kidnapped Gwinbee and prompts TwinBee and WinBee to go rescue their friend, solo or in a cooperative mission.
A crazy TV ad for TwinBee 3
(courtesy of YouTube user Satoshi Matrix)
The lower option in the main screen sends the player to the options menu (see translation below). Besides selecting the difficulty between Easy and Hard, you can also choose the character (TwinBee or WinBee) and the order of the first four levels. One of the main differences between both difficulties, aside from the expected enemy opposition, is the fact that the ambulance appears as many times as needed on Easy. In regular TwinBee fashion, the ambulance shows up after you've taken two hits, restoring the character's arms once collected. In the Hard difficulty the ambulance appears only once, so losing the arms again afterwards will make it impossible to hit ground targets.
A feature that expands upon the ambulance gimmick in TwinBee 3 is the "soul recovery system", which leaves behind a ghost of the character that slowly moves upwards when you lose a life. Take it and you'll recover whatever upgrades you had prior to dying. While it's certainly helpful, sometimes it's impossible to pick it up when you die close to the top. There are also times when it doesn't appear at all, mostly during later loops in the Hard difficulty. Just like in previous entries, powering up the character with anything that takes it off its default condition accelerates the music into a new tune that remains playing until you lose a life. 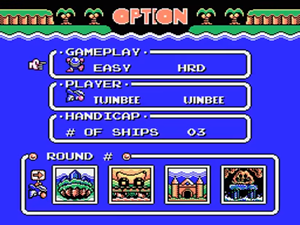 Option menu translation for TwinBee 3
With sceneries that vary from the staple floating islands of the first stage to a psychedelic mix of checkerboards full of cannons in the fifth and final level, TwinBee 3 veers into something a bit different in its middle areas by showing a medieval setting in stage 3 and a coal mine where rail carts slide while shooting at you in stage 4. The last couple of levels is particularly demanding as far as survival goes, so it's always good to memorize where you can get fire matches and extra lives from ground targets.
After firing up the cartridge I went straight into Hard difficulty. While certainly tough in its own terms, my feeling is that most of the difficulty stemmed more from the choppy scrolling than the gameplay itself. If I had to choose a favorite NES entry in this series I'd definitely pick Stinger, yet TwinBee 3 might certainly shine more in the boss gallery department, which is totally wacky and seems more fitting to a Parodius chapter than a TwinBee game. Since extends are earned regularly with every 100.000 points you score and there's no change in difficulty whatsoever after you beat the game, I looped it four times with TwinBee and gave up at the start of the 5th round (stage 5-1) with the score below: 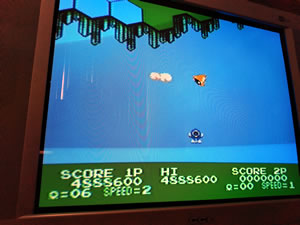