Going by the name a lot of people might believe Stinger is a regular NES game, just like many others. At least that's what I thought for a while some time ago. Look closely though. It's actually a TwinBee title in disguise, in fact the second in the series after the arcade original and its NES port. Originally born on the Famicom Disk System and later converted to the cartridge format, it received a name change in the West that's quite puzzling and certainly makes it prone to bad jokes. Chances are you already heard people referring to it as "Stinker". I did so myself, after all I was never really into the gameplay of the TwinBee series to begin with.

The most noticeable alteration made on the cartridge release is the absence of the third simultaneous player (!) from the Japanese disk version. The three characters in the box cover are reminiscent of the original artwork but can't share the same screen anymore. Another major change is in the story, which sees you fighting evil aliens who kidnapped a genius professor in order to steal a sweetener formula from his brain (the start of the game shows a brief animation for the professor's abduction). The fate of the world rests in your ability to pilot a Stinger ship in order to rescue him. Even though it's not that much more accomplished – or challenging – than the original Famicom game, Stinger definitely packs more variety in colors and environments, as well as a whole different approach to bosses. Poor stage guardians, they've been reduced to wimpy wrecks that look like leftovers from Parodius or Fantasy Zone.

Besides the regular gameplay introduced in TwinBee, Stinger also incorporates a departure from the original formula that, to this day, is unique in the series. It sort of alternates the well-known vertical scrolling stages with horizontal ones. The relation isn't exactly symmetrical since only stages 1, 3 and 7 are horizontals. Strangely enough, gameplay behavior isn't the same across both types of levels.

Starting from stage 2 the characters behave according to the classic gameplay of the franchise: shots are fired with button B and ground bombs are fired with button A. Many special items and upgrades can be collected at ground level, whereas hitting most incoming clouds releases yellow bells that can be juggled by successive shots. Once hit by a determined number of shots a bell switches to a different color before reverting back to yellow, then the shot cycle for a different color begins anew. The new colors provide the following upgrades: blue (speed up), red (laser), white (double shot), blinking blue (shield), blinking red (options). When collected successively, yellow bells increase in value from 500 to 1.000, 5.000 and 10.000 points, a number that's only reset to 500 if you lose a yellow bell or if you take a different bell color.

In horizontal levels both the aerial shots and ground bombs are fired with button B. Button A fires hearts upwards, but these can only be used to juggle bells (they don't hurt enemies). Ground enemies almost don't shoot in these levels so they aren't that much of a threat, which makes horizontal sections more manageable than the overhead ones. Even though the rules for bells remain the same in both types of levels, there's a pivotal difference between them when you get hit. If your arms are damaged in vertical areas an ambulance will cross the screen for you to heal them; if your main body gets shot you die and your ghost flies away to the top, but if you manage to get it back you recover not only your life but also the powers you had when you "died" (both the ambulance and the ghost happen only once per life). In horizontal sections you can recover only the ghost, with no ambulance in sight, which makes sense since the horizontal Stinger looks more like a regular ship and lacks the arms of the original TwinBee design.

There's no doubt the thrill of the game is in juggling yellow bells to maximize the score. However, in order to do that properly you need to acquire a minimum amount of upgrades. Besides a few mandatory speed-ups (blue bells), a good shot enhancer is very welcome. The best ones are obtained at ground level: a half moon gives you a 3-way shot and the star is supposed to give you a 5-way shot. In all my runs I never came across the star, but I found the half moon to be an all-around excellent weapon. In any case, there are so many other ground items to pick that learning what each one does might take a while. Most of them are converted into points (money bags and all sorts of strange symbols such as an ostrich head), some provide weapon enhancers (such as L and R, which give you single side shots) and a few others deserve more special attention. The cross, for example, grants you an extra life, while the professor's head serves as access to a bonus area after you beat the boss. There you'll only come across clouds with yellow bells in order to get as many points as you can before the time expires. No fruit is to be seen anywhere, as was the case with TwinBee. Besides the 1UP cross item, the game also grants score-based extends at 100K, 200K and then for every 200K until 1 million points. 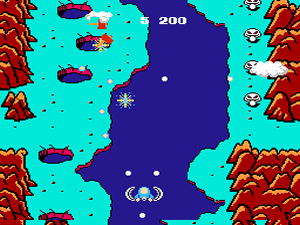 Life is vertical too, you know

Powering up the ship also influences the music, which changes to a more upbeat higher tempo tune until you die or lose your weapon. This lack of variety in the soundtrack is only left aside during the final stage in outer space, which is actually the easiest one if you can get there with a decent speed + shot combo. As I mentioned above, the bosses are a joke and should pose no treat to anyone, that is as long as you're able to use a turbo controller for proper autofire (Stinger has no built-in autofire). Speaking of difficulty, the second loop adds very little in terms of challenge: just one type of enemy for each scrolling direction, and apparently a lower shot count for bell color cycling.

Due to the nature of the power-up system and the way enemy flocks behave, often ramming into you in erratic or unpredictable patterns, trying to power back up after dying can make you lose multiple lives very quickly. Vertical stages are especially aggravating on that matter. On the other hand, if you're able to cling to a powered-up ship with a shield chances are you'll cruise through the game very easily. As for co-op play, I never play my shmups with a friend but it's important to note that, just like in all other games in the series, Stinger allows you to join forces with your buddy to fire a more powerful shot pattern.

My longest credit ended in stage 3-4 (18) with the score below. The run was somewhat abbreviated by graphical glitches that appeared when I resumed playing after having to pause the game for a few hours. Coming up next in the series for me is TwinBee 3, still on the NES/Famicom. 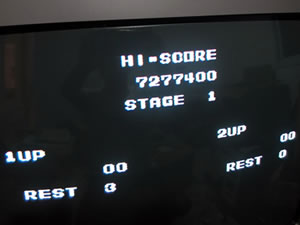