The fate of certain game franchises can be a cruel one, both for the games themselves and for fans. When Trouble Shooter came out in the US a Japanese version called  Battlemania soon followed, granting players with a lighthearted adventure that packed a nice sense of humor and a somewhat original concept for gameplay. However, when the more ambitious Battlemania 2 followed in Japan, no sign of a corresponding Western release ever materialized. Even worse, the Japanese cartridge had such a low print run that it soon became one of the rarest Mega Drive games, not to say one of the most desired prizes in any shmup collection around the world.
Primarily known as Battlemania Daiginjō, the sequel expands on all features of the first chapter to a great degree. Although it doesn't show much upon a first contact, the last half of the game is a tour de force on excellent game design, sheer boldness and creativity elevating graphics, music, presentation and gameplay to a whole new level. In general character interactions are also more frequent and fleshed out, too bad everything is in Japanese (a special translation for the ROM exists if you fancy emulation though). The only aspect that wasn't better handled and fails to deliver, just like in Trouble Shooter, is the scoring system. A blind completion is enough to counterstop the game, unfortunately.
Regardless of the way scoring works and how it deeply affects the game's lasting appeal, Battlemania Daiginjō is definitley a no-brainer as far as immediate fun is concerned, with non-stop action, scrolling in all possible directions, parallax galore, crazy bosses with multiple forms/parts and a pumping soundtrack to boot. 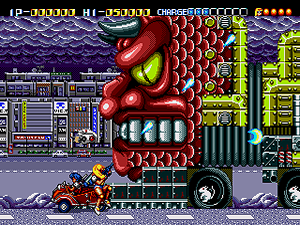 Now this is an ugly angry truck!
The pretty ladies introduced in Trouble Shooter are back to battle another crazy enemy gallery. Protagonist blonde Madison/Mania continues to take the lead while blue-haired Crystal/Maria has her friend's back throughout most of the journey. Following an intro that connects the end of the previous game to the new quest, the start screen is displayed. Going directly into the game is fine, however this time around you can tweak the behavior of your weapons and firepower in the options. Besides choosing from three different button settings (default is A for special attack or "heap", B for shot and C for firepower flip), you can also select between three ways of manipulating shot direction and three different behaviors for the pod/probe.
Regarding directions, 1way is the well-known setting where Mania shoots exclusively forward and only Maria turns her firepower left and right; in 2way both characters flip while in 8way you can point in all directions and lock fire when shooting. Don't get too excited though, even though 8way seems to be the most efficient choice it's also the one that requires the most practice to be properly used. As for the pods you select prior to each level, you can have them set between homing (default hovering pod), roll (circles the player) and negative (goes your opposite direction vertically).
The level progression of Battlemania Daiginjō is backed up by neat cut scene intermissions whose cheerful humor unfortunately gets lost in translation. Except for the vertical nature of the first stage, which sees Maria fighting alone while her partner is asleep, the game has them both together in a series of levels that are quite decent in terms of variety. The second level is an obvious throwback to the original Trouble Shooter, but everything after brings something new and exciting to the table. Giger-esque enemies and obstacles protruding from walls appear in the 4th stage, yet the real highlights are reserved for the couple of levels that follow. During the giant truck part the girls are stuck to their car on ground level, in the single part of the game where Mania is allowed to shoot upwards regardless of the chosen direction setting. Then comes an outer space station with revolving backgrounds, definitely one of the most impressive stages in the Mega Drive shmup library.
In each credit you're given an enegy meter that's constantly refilled either at every 20.000 points or by collecting heart items released by enemies or hidden in unsuspected corners of the scenery. That makes for another remarkably easy ride that doesn't demand much in the way of challenge. The only real threat players must look out for is getting crushed by the scenery, an event that causes instant game over regardless of your life meter. Of course this only applies to main character Mania, since Maria is invulnerable and often falls behind due to obstacles that hold her back as the screen scrolls. In any case there's no harm from touching walls, another defining aspect in the game's overall low difficulty.
Lonesome hunters at heart!
(courtesy of YouTube user Wan1993)
Besides hearts for extra health/life, other items you'll come across are P (power-up), S (speed-up), ↓ (speed-down) and coin (extra points). The pod is powered up with the regular weaponry, and each of the four available types results in a different special attack to be used once the charge gauge is full. Note that unleashing the attack before the gauge recharges completely results in nothing and also resets the gauge. While pod types aren't really advantageous over each other some of them might be better for certain levels, as is the case of the blue pod in the giant truck section (it creates a destructive vertical energy bar for a few seconds).
After each stage you receive a few score bonuses for level completion, special attack usage (each one deducts 100 from 1.000 points) and "guts", which is related to the amount of energy you have after beating the boss (100 points for each health cell). You're also given a shooter rank that ranges across 11 classifications, from Ultimate A (best) to Failure, a designation that comes below D minus. An extra mode called "Score attack" can be selected from the start screen, but it's just a disappointing afterthought where you play only stage 2 for score without even getting to enter your performance in a high score table.
I got the counterstop in Battlemania Daiginjō in my first clear on a single credit playing at full defaults (Normal difficulty, 1way direction, homing probe). I did have a few goes afterwards with other weapon settings, just for the fun of it. 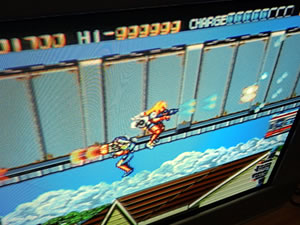