Make yourself a challenge and try to name more than five true isometric scrolling shooters. Chances are most people will fail at that, and even those who possess a deep knowledge of video game history in general will have a hard time filling out such an innocent list. That's why Isolated Warrior is unique among the multitude of shmups available for the NES, a bold attempt at something rarely seen even in the arcade realm before and after its release in 1991. The closest thing I can think of is definitely Viewpoint, and the fact that the latter would only be released one year after Isolated Warrior says a lot about this particularly intriguing 8-bit title.
Also known in Japan as Max Warrior, the aesthetics surrounding the game itself are quite interesting, from the cover art by a Susumu Misutani resembling something made by American artist John Romita Jr. to the bits of storyline that tell the heroic path of Max Maverick, the only surviving warrior of an elite force who's out on a mission to stop evil aliens from invading his planet. Everything is told in the intro and in between levels, with a few brief animation snippets spicing up the narrative at key points of the adventure.
The first stage unfolds in a city with bombarded buildings and strange creatures emerging from holes in the streets. Max advances on foot firing his laser rifle with button B and jumping with button A. The action is pretty straightforward, and while the addition of the jump mechanic feels sort of alien to this type of game you'll soon be thankful for the ability to dodge enemy fire simply by jumping over whatever comes towards you. The jump animation is quite cool as well, and if you keep the button pressed Max will even somersault for a higher reaching jump. Just watch out for his shadow when landing after a pit, because if you fall in it a life is instantly lost and you're respawned in a previous checkpoint. 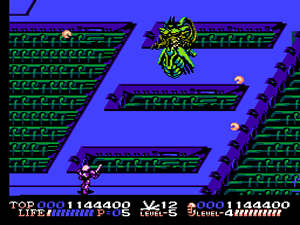 Welcome to your isolation, warrior!
Lives, by the way, come with an energy meter that allows you to take some hits before biting the dust. Besides enemies and bullets you also need to beware of a few harmful walls and surfaces. Robots, crawling maggots, mines, bikers and drone waves comprise most of the enemy gallery, which might randomly leave behind a slew of power-ups for immediate pick-up. The rule of thumb is to collect them all in order to quickly increase your firepower, but the main ones are the upgrades for both weapons (L for laser and W for wide), speed-up (S), bomb power (B) and bomb stock (small blue orbs). A refill item recovers two energy cells, the barrier protects Max from 5 attacks and another blue type of orb adds some bonus points. Last but not least, you might also come across a few rare extra lives (1UP).
Take three W or L items to increase the respective weapon power by one level, and choose which one to use by pressing SELECT. At default conditions wide is just like laser, perhaps that's why you'll automatically switch to wide when it's upgraded to the initial two-way spread pattern. When maxed out it results in a very wide 5-way shot, with laser firing a thicker forward beam combined with a less powerful rear shot. As seen in the lower right part of the HUD, the arsenal in Isolated Warrior also includes bombs, and the method to use them is very simple: just tap A again while jumping. At bomb levels 4 and 5 Max will drop a series of flaming projectiles around him, but if it's still at level 3 or lower you can determine the direction of the single flaming projectile with the D-pad.
Since this is an isometric shooter, it takes a little while to get used to how the game treats hit detection. Although confusing at first, it's at least never unfair. The capped firing rate (autofire included) might also be of slight concern up front, but the game is cleverly built around it. Stage design is quite varied and includes all sorts of terrain, with moving platforms and areas that demand some basic crowd control if you don't want to get overwhelmed by enemy fire. In some levels the main character moves faster with the aid of a backpack or a hoverbike, which speeds up the action a good notch. The 4th stage in the highway is particularly challenging because of the abundance of pits, especially during the boss fight. My advice is to memorize the sequence of power-ups prior to the boss, pick up the shield and keep jumping only on the right side of the screen as you pummel him with a maxed out laser. The music in this level follows the fast paced action and is full of energy, standing as the highlight in a soundtrack that overall fares rather decently for NES standards.
Go Max Maverick, our hero!
(courtesy of YouTube user Patrick So)
Another unusual feature of Isolated Warrior is the special requirement to reach the 7th and last stage. In order to get there you need to beat all prior levels in a single credit, without continuing. The reward is of course the chance to see the real ending, but be prepared to face a final stage full of very strong enemies and little to no life recovery items. Dying there makes things even harder, but here's a little piece of advice: note that when you die only the weapon you're currently using is reset to its default power (on top of bomb power being reduced by 1). Since a fully upgraded laser is by far more powerful than a fully upgraded wide shot, just remember to switch to wide whenever you're about to die. Then you'll always have a good chance of overcoming the harder parts of the game, final boss included.
Speaking of difficulty, perhaps it's good to look out for secret spots unlocked by bombing. They can lead you to three types of secret areas: a high speed bonus stretch with lots of items, an intermission where your energy bar is fully recovered and a visual panel where Max meets a wounded friend warrior (I guess). Obviously the intermission areas are quite handy, especially in the last couple of levels. Unfortunately I only knew about this after I was done with the game, so I didn't get to uncover any secret area.
The scoring system includes a progressive end-of-stage bonus based on weapon power, remaining life and bomb levels. Scoring is also good for survival because you receive an extra life at every 300.000 points. Unfortunately the game can be broken as soon as you reach the second boss just by parking the character to the sides and firing away with wide shot to destroy the large bullets fired by the boss. This is the only real flaw of a game that's otherwise fairly engaging and fun, with occasional cool designs for bosses and a few impressive effects here and there, such as the rippling surface in the second half of stage 3.
Not only is the scoring system broken, but the difficulty after the first loop remains exactly the same with no bump in challenge whatsoever. Just to have an idea, in the picture below I died a few times in the first loop but completed the second one in a single life. I took the photograph as soon as the third loop started and called it a day. Well, at any rate it was worth the ride, so if you want to try something different in the gallery of NES shmups there's no denying Isolated Warrier is a competent pick. 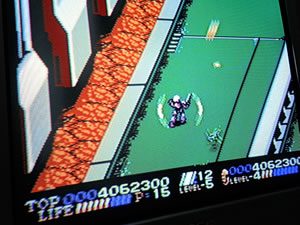