Cheapness alert for every PS4 gamer! Want to add a dirty quick clear to your conquer list? No only that, do you happen to be an achievement whore? What about adding another platinum trophy to your PS4 profile with little to no effort whatsoever?
If you've answered YES to any of the above questions, Red Death is definitely recommended. Vouching for it in shmup terms is a little bit harder, given the lack of content and the extremely low production values involved. It doesn't mean the game is worthless, for you might actually have some good time with it while it lasts, even attempting to perfect run after run in search of a higher score. The problem is that Red Death is over way too quickly, never mind the extra endless roguelike mode that's unlocked when you finish the regular game course.
More of an exercise in programming than a fully developed game, Red Death is the prequel to both Project Starship and Project Starship X. Perhaps the devs had it stashed deep in some basement vault and thought it would be worth to release it as a standalone title instead of an extra mode in one of the sequels. Minimalistic to the bone, Red Death adopts a four-color palette for graphics while using an extremely limited asset array to deliver only three scripted stages, playable right away in the START choice of the game's menu. Reduced number of colors aside, this is an aspect that actually works in pure visual terms. You're even tricked into not noticing how the graphic designers seem to have used very elementary sprite-based software such as MS Paint. Yes, it's that primitive.
Console launch trailer
(courtesy of YouTube user and publisher RED ART GAMES)
According to the constant communication messages from an unseen operator, the pilot and the tiny ship are identified by the codename RED-001. The ship is capable of shooting a main weapon and also deploying a temporary overpowered version of said weapon once it collects enough star energy left behind by defeated enemies (shot is in button ×, overload activation is in button ○). You can also decrease the speed of the ship by pressing L2 or R2, which comes with just a wee bit of slowdown and is of course essential to navigate the most intricate bullet patterns.
Weapons available consist of P (default straight vulcan), L (laser) and M (missile). The amount of items you need to pick in order to upgrade your weapon varies: P requires several of them, L can be upgraded only once and M can be upgraded twice. All of them need to be powered up separately, however the main game is so short that M is made completely useless because it appears only once. It's a pity because a fully powered missile is devastating. In default conditions it is the worst weapon, followed by P and then laser. Interestingly, a fully powered L is less effective than a fully powered P. Note that you hear "power" as you collect P, but it's obviously no power-up for the other shot types.
Another item that appears a lot in Red Death is S, which stands for ship / extra life. These come in steady numbers and help players move along, except for when you die during a boss fight. However, that doesn't make much sense because there are only three stages and three main bosses, with the last one fought with a permanently overloaded weapon (overload isn't lost there even when you die). By the way, talk about a cheap way to make your short game less short... just block players from skipping the plethora of text messages in the final level, something you were perfectly capable of in the first couple of stages (not only is this annoying, but the abundance of the word FUCK in the written dialogue is certainly uncalled for). 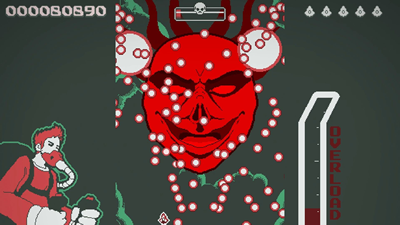 RED-001 against and all-out red angry (happy?) boss
Once the main course is beaten an "Arcade" mode is unlocked in the main menu. The differences are in the randomized enemies and bosses and the lack of an ending, with difficulty ramping up slowly as you make progress through the levels. Arcade mode does include some new enemies and a completely new boss, but it's not enough to avoid the feeling of repetition that might come up very soon if the procedural generation isn't creative enough with the limited resources at hand. Another troublesome detail in this mode is the stage number being permanently displayed right in front of the area your ship is supposed to be when dodging heavy enemy fire, i.e. close to the bottom of the screen.
No matter the mode you're playing, the rules for scoring are the same. Killing everything and not dying is obvious, but you can also increment your score by collecting stars left behind by enemies, which fill up the overload meter but are also worth a few extra points. The little catch is that when some enemies (and boss phases) are destroyed they turn all visible bullets they fired into stars as well. This means that it's often good to let them live long enough so that you can profit from their bullet sprays. In addition to that, whenever you die all on screen bullets are also converted to stars. This allows several optimization alternatives, and I must confess it made me spend more time with the main course of Red Death than I had anticipated up front.
At least until you get tired of it all, what I mentioned above is the main reason for the strangely alluring aspect that makes you come back for more credit after credit. That's the best compliment you can say about such a bare bones release, other than the decent danmaku sensibilitites and the good use of a tiny hitbox. That's a lot more than what you could state about other budget titles published by Red Art Games, such as Ice Cream Surfer or Fullblast.
The first picture below is my best 1CC result in Red Death's main game. The second one is my best result in "Arcade" mode, reaching stage 10. The latter high score display is shared by both game modes (yuck), but thankfully you can take snapshots on the fly on the PS4! 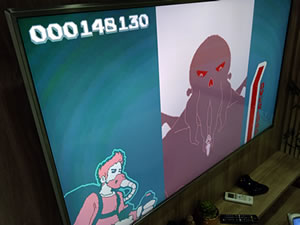 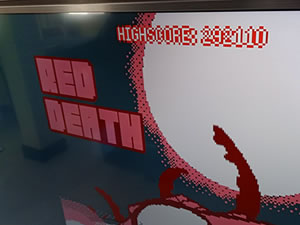 Coming up next: Project Starship.
Posted by Edward at 10:49 PM