Six years are almost a lifetime in the evolution cycle of a video game. That's the time span, for example, that separates Eschatos from Judgement Silversword and Cardinal Sins. It's fascinating to check out how one-man developer M-kai joined Qute in order to make Eschatos, which by all means is a direct sequel to Judgement Silversword except by name. One should try out the latter first in order to know what I'm talking about, but that's of course not important if you want to dive directly into Eschatos. What really matters is that the Japanese Xbox 360 release includes all three games mentioned in this short paragraph, in a complete package that serves as a perfect entry ticket to the flashy style of developer Qute.
Eschatos is of course the main title in the disc, a fast-paced sci-fi adventure where the player fights hordes of enemies brought by a triad of huge flying saucers that are threatening to take over the Earth’s moon. There’s an organic, seamless progression that unfolds with exquisite cinematic flair and takes you from futuristic urban sceneries to the depths of the enemy lair inside our natural satellite. Expect huge explosions, dynamic transitions and perspective shifts galore, some of them even with bullets and hazards to be avoided or dodged.
Gameplay inputs in Eschatos consist of a powerful straight shot, a less powerful wide shot with shorter reach, a shield that protects the ship against incoming fire (normally activated by pressing straight and wide shot simultaneously) and a switch that cycles back and forth between three predetermined speed settings. Knowing the strenghts and weaknesses of these resourses is essential, such as the dead area right ahead of the ship when using wide shot, the offensive use of the shield whenever possible or the fact that the larger the bullet the longer it takes for the shield to deplete it (yet the shield works against any sort of laser, even those huge blasts that appear later in the game, homing or not).
A quick glance at the blistering action of Eschatos
(courtesy of YouTube user and developer Qutejp)
There are three modes of play: Original, Advanced and Time Attack. Even though they share a basic structure and roughly the same enemy patterns, gameplay rules differ. And since most people consider Original to be the main mode, that’s the one I focused on. There’s a single icon to be found in it, a blue F that works as a flash bomb that melts all on-screen bullets and cannon fodder. Beyond its obvious benefits for survival, this flash bomb also factors into the scoring system due to the fact that speed killing enemies grants you better bonuses, so timing the use of the bomb to clear waves faster is definitely encouraged.
The next component of the scoring system in Original mode is the multiplier. Each wave that’s completely destroyed increases the multiplier by 1, and for every death or each enemy that flees the screen the multiplier goes down by 1. In the normal difficulty the ceiling to this multiplier ×10 (it’s higher in further difficulty settings) and during the course of the game it’s only reset after you fight one of the main bosses in stages 5, 11, 15 and 20. Speaking of stages, due to this structure of main bosses some people refer to Eschatos as a 5-level game, yet I prefer to see it with the full 26 areas/stages nonetheless.
Another component of the scoring system is related to the hidden icons known as “wonderwitches”, in a clear homage to the development kit that was used to create Judgement Silversword for the Bandai Wonderswan handheld. In order to reveal the wonderwitches players must shoot at their secret locations in stages 4, 9, 13, 16, 20, 22 and 25. With increasing base values, from 1.000 to 100.000 points, some of them require specific approaches to be found. Since they have the nasty habit of fleeing the screen if you rush to get them, just stay low and let them come towards you before making the move to pick them up.
Finally, a few expressive completion bonuses are granted once you beat the game. For the normal difficulty you earn 1,5 million points, as well as one million points for every life in stock. Several 1UPs appear throughout the game depending on the amount of destroyed enemies, bouncing once in the bottom before falling off the screen for good. Note that picking up the 1UP also grants you a split-second moment of invincibility, just like in Judgement Silversword. This is one aspect of many that’s similar between both games, which also share lots of bullet patterns and enemy behavior routines. Eschatos also throws a few nods to classics such as Xevious and Space Invaders, with the latter serving as the mold for one of the most intense moments of the game in stage 19. 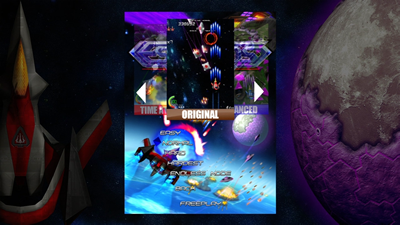 Choose your destiny!
A different sort of rush awaits players in Advanced mode. On the surface enemy placement and behavior is the same as in Original, but besides the blue F-bomb and the 1UPs this game variant also includes power-ups (P) and golden F-bombs. There's no time bonus anymore, but the multiplier still goes up by destroying full waves; what's new is that it also increases by 1 for each power-up you take, with the caveat that you get less shield energy the more powered up you are (down to 30% shield with max power). All shielded bullets are turned into purple crystals that start rotating around the ship as a barrier for as long as the shield is deployed, being absorbed as bonus points when you stop using the shield. The golden F-bomb also turns all on-screen bullets into crystals while decreasing the multiplier by 1, so the challenge is to find the balance between keeping a high multiplier and using the golden F-bomb to cash in on the purple crystals (normally the blue F-bomb is a no-go since it also affects the multipler negatively). In the normal difficulty the maximum multiplier is ×16.
Both Original and Advanced have four difficulties available and also an "endless" setting where the game has no end. On the other hand, Time Attack mode has no difficulty selection and presents a single challenge where you're supposed to get through the game as fast as you can. I guess the main reason for this is that this mode has adaptative difficulty, i.e. rank, which makes the game harder the better you perform. In a nutshell, beating levels quickly gives you extra time to fulfill your mission, while dying takes away five seconds of the ongoing timer. If the counter reaches zero the credit ends.
Given the variety and the depth provided by the scoring systems across all game modes and difficulties, Eschatos is a mandatory title in whatever form you can find. Only the soundtrack doesn't quite cut it for me during the first half of the game, but once you're in outer space it gets much better. Otherwise Eschatos excels at offering a nice mix of fun and intensity with a smooth challenge curve that draws players in without much effort. Just beware that with so much incentive to be aggressive (Original mode) or to avoid F-bombs (Advanced mode), trying to score higher often incurs in restartitis if you die too soon. Continuous play grants option "levels" that unlock several extra adjustments in the options menu, which is already well served with resources such as replay saving, a handful of video/audio tweaks and online/offline leaderboards.
My best 1CC results in the normal difficulty of Original and Advanced modes in the Xbox 360 version are below. This edition comes with an extra disc with the original soundtrack, but the best thing about it is that it's region-free! 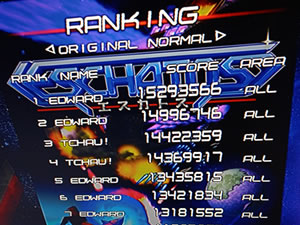 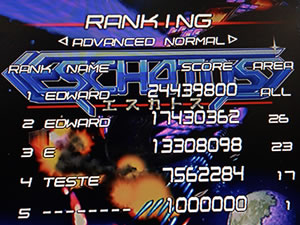