Continuing with the exploration of the sample games included in the Japanese Dezaemon series of shmup-making titles, let's now take a quick look at Daioh P!, the final episode in the consolized and heavily toned down version of a very tough arcade shooter. The previous chapter is Daioh Gale Ver. 2 on the Dezaemon Plus disc, released for the Playstation in 1996.
Daioh P! is one of the five sample games included in the Dezaemon 2 shmup-making title for the Sega Saturn, accessible by choosing the S3 option in the start menu (it's the second sample game I'm playing on it, the first one was Biometal Gust). The "P" in Daioh P! stands for polygons, which means that every visual asset in the game uses this technique, from ships and crafts to terrains and explosions. Since it has five stages, the basic mold upon which it's based seems to be Daioh Gale Ver. 2, yet there are one or two aspects that date back to the first Daioh Gale, originally released for the Super Famicom in 1995.
Daioh P! maintains the general stage layouts and enemies from Daioh Gale Ver. 2, as well as an updated version of the same soundtrack. The main additions include the primitive electronic preamble prior to the start of each level, several new sound effects that give the action a slightly different feel from previous entries, the scrolling speed that varies from time to time and the fact that all bosses have two or three distinct phases instead of just a single attack routine throughout the fight. Other than that, the graphic design is extremely simplifed and lacks details, which is sort of expected for a game developed using standard predefined polygon tools. 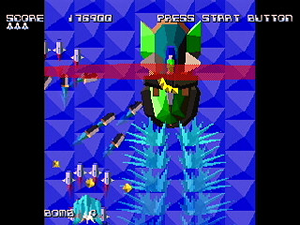 Chasing the second boss over a blocky polygon ocean
Playing the game requires basically two inputs, rapid shot in button R and bomb in button C (for those interested, the single shot is mapped to button A). All items are released by destroying a specific carrier, starting with the colored icons for weapon choice: red (spread vulcan), blue (straight shot with homing missiles) and green (homing shot). In order to increase weapon power you need to collect the P (power-up). The remainder of the item gallery consists of SP (speed-up), SH (1-hit shield), B (extra bomb) and a medal that's worth 5.000 points. Weapon icons and medals fall off the screen right away when released, whereas all other items float around for a while before disappearing.
The last aspect of the core gameplay is bomb usage. Bombs work according to the weapon you're currently using. For the red (vulcan) you get a round blast that damages everything around you, green shot (homing) results in a more powerful homing attack with increased damage and the bomb for the blue shot (straight + missiles) consists of a frontal attack that funnels inwards as the bomb energy dissipates.
Most of the time Daioh P! flows at a nice pace, with almost no threats imposing any sort of pressure on players. That said, the only moments where bullet spreads start to become more dangerous are during boss fights, which are now preceded by warning messages inspired by Darius (a huge battleship is approaching fast!). Their final phases can take you off guard with sudden attacks or close-range overlapping blows, and for that the best strategy is still good old memorization. Never mind the spiralling sand columns of the 3rd boss though, the effect is kinda reminiscent of Soukyugurentai but it's harmless, just for show really.
Even though at least one speed-up appears every time after you die, which makes boss fights fair and tougher sections manageable, the final boss is no pushover and requires lots of movement to be defeated. It's also important to note that you're always respawned with the weapon you were using when you died, which in some cases can lead to extremely dire situations because you can't switch to another weapon. Facing the last boss with the homing weapon is such an example since you never know when the homing shot will start chasing the boss itself instead of the drones he drops or the central deadly bullet, which can be destroyed even by a level 2 vulcan shot.
The first stage of Daioh P! (easy difficulty)
(courtesy of YouTube user The VideoGames Museum)
Since you get a few extends in a regular run, starting with 100.000 points and then for every 300.000 points after that, Daioh P! naturally allows checkpoint milking if you feel inclined to do so. I guess it's just a matter of finding the best checkpoints for that, which is something I didn't try to do. One such part of the game, however, is definitely the last boss due to the drones he drops in his first form (as I mentioned above). Marginal score contributors consist of loose projectiles from turrets, but it's also important to not let any medal go by. Medals are the only items that can be dropped not only by carriers but also by specific enemies, so keep an eye out for them.
Although sympathetic thanks to the full polygon design and the ability to play in co-op, overall Daioh P! is very short and doesn't have enough substance to warrant a lasting impression. It's okay but it's certainly of more interest to those who care about the works by Athena or the possibilities to tinker with all sample games, as is usual with the Dezaemon titles. Since I didn't venture into ckeckpoint milking, my best score for Daioh P! was achieved in a no-miss run (Normal difficulty). 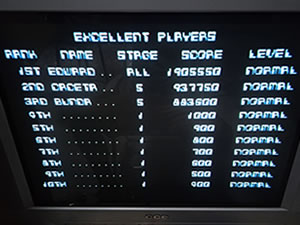