Second chapter of a confusing trilogy developed by tiny developer Panda Indie Studio / Arabong, Project Starship retools some of the elements of Red Death into a slightly more ambitious effort that preserves its minimalistic interface and roguelike approach. The game still feels rather bare bones in almost all aspects, but at least it chooses to focus on a full blown gameplay experience that literally floods the wide screen of HD TVs with colors and bullets, as opposed to the standard 4:3 vertical orientation of the prequel.
Before we move on it should be noted that Project Starship is completely different from Project Starship X. The latter is the third part of the series, yet in terms of physical media it was actually the second game to be published.
Another consideration to be made about Project Starship concerns the whole mindset behind the roguelike design. It is after all an acquired taste, which in this case is put to the test by an uneven balance between enemy patterns and resources and how they get randomized across the 16:9 screen ratio. The overall tone is cartoonish with large sprites, an extremely psychedelic enemy gallery, 8-bit styled music and bullets of all sizes that fly around at varying speeds. There's nothing special about the animations, yet there's so much going on most of the time that the game does feel overwhelming and deserving of the bullet hell moniker.
Release trailer for Project Starship on the Playstation 4
(courtesy of YouTube user PlayStation)
Pressing either ×, ○ or OPTIONS/START sends you into the game proper, then you must choose between a boy (Garret) or a girl (Gwen) and select the desired difficulty (Easy/Hard). The difference between the pilots is purely cosmetic, with no distinction at all between them besides ship color (blue/red) and in-game voices (male/female). On your last life the character also comically appears waving for help at the bottom of the screen, but that's it. Shoot with buttons ×, L1 or R1, fly slower by pressing ○, L2 or R2 (focus shot) and deploy the current special item in stock with button □. It's not possible to remap inputs or apply any changes to the game, which has just one single roguelike campaign with five stages.
Levels in Project Starship might differ in terms of environments and backgrounds, whereas enemies are completely spawned and placed according to the procedural generation routine. Level transitions happen when bosses go down and a big LEVEL UP message appears on screen. All stages have a mid-boss and a regular boss with 2 to 4 large health bars, but bosses can sometimes be replaced by a dark maze or by a fiery wall that shoots out almost undodgeable flame lasers if hit by one of the approaching space debris. As a rule of thumb, whenever a big enemy is defeated you get at least one item as reward, and if you're lucky it will be one of the special kind.
Item pick-ups are in a category of their own since they're one of the main sources of confusion when you start playing. There are three types: regular upgrades, weapon/ship enhancers and special attacks. Regular upgrades are denoted by alphabet letters and include P (power), T (rotating turret/option), R (ratio), M (missile), H (homing, very rare) and S (shield/life). Enhancers are denoted by symbols and might provide extra help in the long run or just alter your shot sprite into more powerful forms such as a shuriken, a black firing stream or a blue/red thick laser that's extremely powerful (the so-called "holy grail"). Examples of helpful enhancers include a full stock of spare shields, a small shard-like barrier that rotates around the ship and is capable of deflecting enemy bullets or a Super Mario-like green mushroom, which grants you another chance to succeed before the credit is finished (technically not a continue).
The final item type is the one that can be stocked for later use by pressing the □ button. Once collected they appear in the container at the top of the screen. Some of the most useful ones I can recall are "TV doesn't work" (blanks the screen with static for a few seconds and gets rid of all bullets and minor enemies) and the EMP (screen clearing blast), while "Ultra Mega Super Laser" and "President Button" send more powerful laser/missile attacks upwards.
Low production values aside, it's certainly possible to see the potential of the ideas behind Project Starship. The problem is that this potential is often buried by unfair procedural generation. Even though the hitbox of the ship is clearly shown at all times, it's common to get the feeling that the default speed is too fast and the focus speed is too slow. Tapping the focus button helps with that, you just need to get used to it. Players also need to cope with items that are best avoided such as the overload / lightning sign (it actually increases enemy aggression instead of your ship's firepower) and the skull (takes away one shield/life but only appears in the final level). I don't recommend picking up the large ring either since it splits your firepower in two less powerful firing streams, but you absolutely need to avoid the large red sword. Finally, remember that collisions against walls are fatal and mean instant GAME OVER. 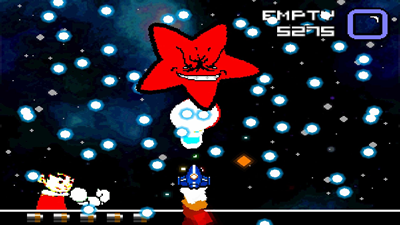 A red star full of anger
No matter how used you get to all items, I was still seeing new ones by the time I was done with the game. On top of all the confusion the plethora of items can make, Project Starship also throws several special sections called "mad events". These are brief interludes where you're faced with special challenges such as dodging crazy obstacles or evading large laser blasts with inverted controls. There's no logic as to when a mad event will kick in, but if you perform well enough a special item appears afterwards. Difficulty varies greatly in these parts, and evading some of them without losing lives can be quite tricky to pull off.
As for the scoring system, there isn't anything really important to be said about it since score meanderings are quite obtuse. Every shot landed and every enemy destroyed gives you points, but I don't know if there's any sort of hidden multiplier in place for not getting hit, for example. Suffice it to say that most of the points in any run comes from the final level.
Despite the constant feeling that Project Starship is being unfair, in all honesty it's quite hard to put it down once you're deep into a gaming session. In the end that's the best thing about the game, even though it might take a while to actually understand it to the point where success becomes more likely than failure. And though not clearly stated, success when playing in Hard mode earns a few interesting new items shown whenever you start a new credit. The first one is an H that stands for "hardcore" and takes away all your spare lives. Just ignore that and try to beat the game again: after the final boss you'll finally get the chance to face a true last boss with multiple forms that gives you a massive amount of extra points. If beaten, a new B item will appear at the start of every credit to turn the game into a boss rush, and on top of that you'll finally be able to see which level you're playing at the top of the screen.
Truth be told, I certainly had more fun with the game than I had initially anticipated. Since there's no high score table anywhere and no distinction between difficulties in the high score shown at the start screen, I just took the final snapshot at the end of my best run. I only played in the Hard difficulty, and after a while I settled with Garret because I felt more comfortable with a blue ship than with a red ship. 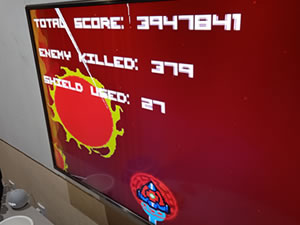 Next: Project Starship X.
Posted by Edward at 11:49 PM