I guess we can all agree that the shmup genre as we know it today was in its infancy back in 1986. However, this was a very special year in the history of Japanese developer Taito because that's the year when Darius came out. A huge accomplishment in itself, Darius definitely overshadowed everything that the company delivered at around the same time, including titles such as Bubble Bobble, Tokio / Scramble Formation and Kiki Kaikai. Easily overlooked back then, players were given a new chance to play these secondary arcade games at home by means of compilations such as the Taito Memories discs released for the Playstation 2. In the case of Kiki Kaikai, the edition you should look for is Taito Memories Volume 1 (Joukan).
The name Kiki Kaikai translates to something like "Bizarre Mysterious World". Drawing clear inspiration from Capcom's Commando, the game is an unscrolling multidirectional shooter rooted in Japanese folklore. It follows the adventures of Sayo-chan, a shrine maiden that goes out on a quest to free the seven lucky gods kidnapped by a mysterious villain. There's a strong characterization based on Japanese mythology, but given its primitive graphical assets it's fairly easy to judge Kiki Kaiki as another one of those dry, repetitive, bare-bones arcade romps of the 80s. This impression gets even worse if you venture into the game right after being exposed to the visual spectacle provided by modern games.
However, if you're persistent enough to get beyond the drab surface soon you'll find out that being simple in graphical terms is the only feature of Kiki Kaikai that might have aged. The gameplay is tight and the challenge is vicious, with a fun factor that lies somewhere between the punishing gameplay and the game's subdued natural charm. The soundtrack is rather limited and alternates between two tracks only across all levels, but the collection of sound effects is quite varied and diverse. As for the quality of this port, even though it lacks a TATE mode it's pretty much arcade perfect. Unfortunately there's no TATE option for any of the vertical games included in Taito Memories Volume 1, so playing on a large TV is definitely better if you want to get a hold of all the tiny details of Kiki Kaikai. 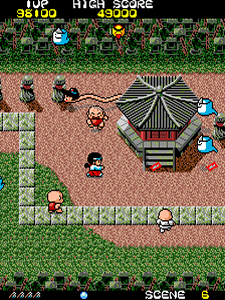 On the way to meet the fox demon to free god of wealth Juroujin in stage 6
First of all, Kiki Kaikai needs to be unlocked first if you're going to play it by means of the Taito Memories Volume 1 compilation, either by playing any game(s) for at least five hours or by entering the button code L1, R1, R2, L2, SELECT and START at the title screen (which also gives access to all remaining unlocked games). Seriously, Taito, why? Anyway, the game controls are quite simple: one button is used to shoot ofuda scrolls in eight directions, another button swings Sayo's purification rod directly in front of her. Both attacks can be used to dispatch the majority of enemies (there are exceptions), while pressing both buttons at the same time activates the special power related to any crystal ball you have in stock (these need to be found and collected).
Control inputs are fully configurable in the options, but if you have a turbo controller with you I strongly recommend its use. Considering that Sayo-chan is a fragile little lady that doesn't possess outstanding magical powers, autofire will certainly help her go a long distance. She's at the mercy of the gods when it comes down to resources and upgrades to be collected along the way, which leaves her severely underpowered most of the time. Items are released either by destroying a full wave of tiny brown enemies (otamas), by sweeping lit totems with Sayo's purifying rod or by shooting specific places in the scenery. Most of them will be the blue scroll that extends the reach of your regular shot, but every once in a while you might get more useful items.
Scroll item variations include red (piercing shot), yellow (larger/double shot) and double blue (increases the allowed shot ratio), but you can also find an icon that looks like a small house (oniguiri, worth 2.000 points), an extra life (very rare) or blue/yellow crystals. When activated by pressing both action buttons, the yellow crystal clears the screen from all enemies while the blue crystal freezes all enemies for a brief period of time. The only single item that appears out in the open is the golden key, which must be collected to allow your entry in the stage boss chamber. If you don't take it the boss fight will be denied and you'll have to go back all the way to get the key.
The problem with going back is that doing it (or refusing to move on) has a nasty effect in the gameplay. Besides some of the demons and spirits getting faster and more aggressive other dangerous foes might enter the screen, such as a jumping creature that reminds me of Q-Bert and the ring of supernatural fire that chases you around. Of course that doesn't mean the rest of the enemy gallery is less deadly. On the contrary, after the first couple of stages things get quite intense, demanding players to be on their toes at all times. By far the most dangerous enemy is that brown ghost that arrives in flocks and slows you down, only letting go if you're able to pass below one of the red archways. Since archways are far into the level more often than not you'll die horribly as if you were being dragged to hell like Rick Aviles and Tony Goldwyn in Ghost. You can get rid of them if you have a crystal in stock, which is actually the most important strategy to adopt prior to entering stage 4.
First couple of "scenes" of Kiki Kaikai on the Playstation 2
(courtesy of YouTube user PickHutHG)
Getting comfortable with fighting off all sorts of cute spirits in Kiki Kaikai certainly takes a while. Besides what I just described above, special attention must be given to creatures with odd behavior such as the demon head that suddenly pops out of large huts or the tombstones that follow you vertically, as well as enemies that can't be pushed back with the purifying rod (snakes, folded umbrellas) and environmental hazards such as bridges and pits (avoid getting close to their borders at all costs). At least normal walls aren't fatal, and since you can't strafe it's possible to lean onto them to direct your shots. Bosses are in a different league because you can only hurt them with the regular shot, and sometimes only when you're allowed to. They start quite easy, but later on some of their attacks becomes rather tricky to avoid.
An interesting twist here is that the final level has no boss, but you'll need to collect three hidden scrolls in order to complete the game. The good news is that these special scrolls are always in the same place, so it's just a matter of memorizing where they are. If you can't find them the stage just goes on forever, whereas in the case of success you'll eventually reach a corridor and the game will end as soon as you get through it safely.
Although not clearly noticeable, Kiki Kaikai has a built-in rank system related to the amount of surplus scrolls collected. Long story short, the more of them you pick the more health bosses will have (this is easily noticeable when you die and have to face the boss again). If you don't want to make bosses stronger just avoid collecting more than two blue scrolls or any extra scroll beyond the ones you've already applied to your firepower. In my experience I didn't care for this and collected them all because each scroll is worth a few points and boss battles become more manageable once you get used to their behavior. In essence, score chasers will take every single item the game gives, on top of killing everything that moves of course.

Click for the option menus translation for Kiki Kaikai on Taito Memories Vol. 1
Kiki Kaikai has absolutely no continues, with extends granted at 70.000 and 150.000 points. When the game is over a random counter will give you a three-digit number, and if it matches the last three digits of the player's total score you'll be awarded a new credit. This doesn't make much sense in the console world, but it must be great if you're playing the game in an arcade center. Speaking of consoles, Kiki Kaikai received a limited number of home ports and was followed by two sequels developed exclusively for the SNES. Out of Japan they were released with the name Pocky & Rocky, which is the most common title used for this series since the 90s. Later on a canned sequel was reworked and released for the Playstation 2 as Heavenly Guardian, but even though it shares elements with Kiki Kaikai the emphasis on exploratory gameplay pretty much excludes it from the shmup genre.
Once I beat the game I played a little further in the second loop and found my demise in the rematch against the second boss (scene 10). I did have fun with it, but I didn't feel inclined to play again to improve my score. For now let's leave it to one of the ports or sequels! 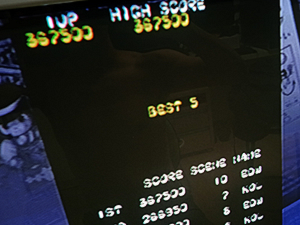