It's really hard today to believe there was a time when this game was actually a hit in children's homes around the world. But this port of 1942 was indeed very successful in its era. These days the game is widely panned for its monotonous gameplay and grating music (or lack thereof), however with the glaring exception of the "monotonous" qualifier all aspects of the game are actually inherited from the original arcade title.
In my opinion arcade 1942 is probably one of the hardest classic shooters ever designed. Whenever I feel inclined to play the original I can't help but experience real fear and subsequent horrible defeat. The good news for us wimps is that for many tough arcade shmups out there chances are we'll find a suitable console port that's a tad more approachable. So if arcade 1942 mops the floor with me I can always chicken out and go to the NES version, and that's what I did during a tediously dull evening. I was tired and I was bored.
Here we have the quintessential shooting game of the lone airplane fighting enemies in wide open areas. In a sense, it's a marginally improved take on what you'd find in the Atari 2600 catalog – especially in the audio department, which consists of sound effects and beeps/whistle noises for music. The game box heightens the expectations with all sorts of thrilling and exciting descriptions, starting with the Super Ace moniker given to the Lockheed P-38 Lightning aircraft. Granted, NES 1942 is far from evoking much enthusiasm, yet one can at least find solace in the fact that it's actually reasonably faithful to the arcade game.
Disrupt enemy formations ready to attack!
(courtesy of YouTube user No Commentary Gameplays)
Controls are simple and straightforward: button B shoots and button A performs the "loop the loop", an evasive maneuver that makes the fighter plane invincible while the loop animation lasts. As a panic function the loop is of course quite an invaluable resource, the only concern is in its finishing part: if you land over a bullet or an enemy you’ll inevitably die. You get three loops at the start of every stage, regardless of how many of them were used in the previous level. Unused loops are converted into bonus points, as is the stage destruction ratio (the more kills you get the better the reward at the end of the level).
As you fly over land and sea flocks of incoming craft the same size of yours will arrive from the top of the screen. There’s not much variety to them, but watch out for the red/orange-colored ones that arrive in specific formations. If you destroy a full formation a Pow item will appear, and the color of the item determines its effect upon collection: double firepower (green), two side/option planes (white), extra life (red), extra loop (red w/ orange border) and instant smart bomb (white w/ red border). All items are also worth 1.000 points each. The only other single item to be collected is the yasichi lollipop that's released if you hit the plane that quickly accelerates upwards from the sides. It’s worth 5.000 points.
Players also need to be cautious of mid-sized and larger planes coming from below, that's why it's not a good practice to hug the bottom of the screen at all times. These are stronger enemies that take more hits to go down, especially the huge one that starts shooting out a spread pattern once it reaches the middle of the playing field. An even larger plane appears four times throughout the game at the end of specific levels, however despite its massive size this boss (the only boss you'll come across actually) can be easily defeated by standing close to one of the wings, thus avoiding the bullet sprays coming out of its tail. 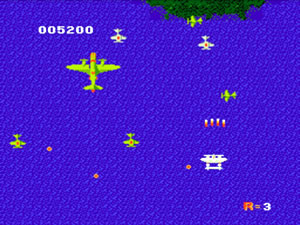 Daring fighter pilot Super Ace intercepting enemy air warriors!
Every four levels the behavior of enemies is different: none of the small planes will shoot at you, in what the original game calls "% and point up" stages. The only enemies that will shoot are the large planes that enter the screen from below. The opportunity is there to rack more destruction percentage bonuses, so having the side fighters to increase firepower definitely helps. Just note that these side planes can also be individually destroyed. Racking up points is the way to achieve extra lives, starting with 20.000 and then proceeding with futher extends for every 80.000 points scored afterwards.
Since the game has 32 stages, a full credit of 1942 lasts well over an hour. Every stage ends with the plane landing in an aircrat carrier, collecting the bonuses and reloading the stock of loops. The impression of going through a repetitive and tiresome ordeal is all over the game, even when you consider the poor choice of background colors that sometimes makes it hard to track enemy bullets. At least in this port bullets don't get any faster as you advance, which leaves bullet density as the sole promoter of higher stakes later in the game. It's nothing outstanding in terms of challenge though, unlike the arcade original. There's no autofire, so a turbo controller that works (mine didn't) is definitely useful.
I was hoping to top my previous best score this time, but it wasn't the case and I simply didn't want to try again. Once the game ends it's really hard to get back to it because of its length and utter lack of excitement. That's why I attached below my old 1CC score, for the sake of keeping up with my records. As we can see from the picture, the high score in the NES port of 1942 rolls over the million mark, with the regular final score (to the left) representing the points in excess over one million. The sum and final result in this case is 1.292.800 points. 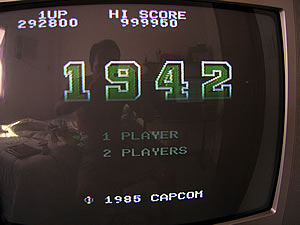 The NES was lucky enough to also get a port of the sequel, so hopefully soon I'll be trying out the 8-bit version of 1943 - The Battle of Midway.
Posted by Edward at 10:52 PM