It doesn’t take much to realize there’s a touch of weirdness in The Lost Sunheart. It's got that offbeat atmosphere often associated with Japanese stuff, and for many people that alone is a good reason to try it out. Though not reaching the heights of something like Ai Cho Aniki, the game has some bold imagery in boss designs whose context gets lost in the story completely presented in kanji. The broad understanding on my part is that five magic crystals are stolen by evil creatures, and our mission as players is to get them back. One fiendish boss at a time.
Also known by the Japanese title Bouken Danshaken Don San-Heart Hen, this little and obscure shooter can be quite deceiving. The overall design is dark and moody, and the start of the journey tricks you into thinking the challenge ahead might not be that taxing. That's the impression we get when each life comes with a health bar, isn't it so? Soon enough the stakes start to get higher though, demanding a little strategy in order to preserve health as you go through each checkpoint. After all, every death sends you back to the very beginning of the section.
If you go to the options there’s a mode switch whose sole purpose is to turn cut scenes on and off (adventure ON or OFF), with no interference in the gameplay whatsoever. Shooting is accomplished with button II and movement speed can be toggled between four settings at the press of the SELECT button. As for button I, besides inputting your initials at the start of every credit it's also used to trigger special powers that become available later (keep reading). Even though your ship is changed for a new one at certain points in the game, these "upgrades" don't add anything to your arsenal except for the first ship replacement, which activates permanent Darius-like bombs.
Silly observation: the first couple of ships remind me of a faucet and a fried chicken. Look closely and tell me if you agree! 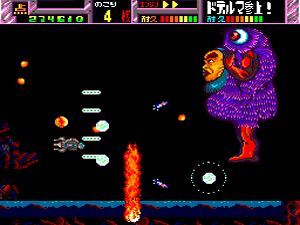 A creepy man in disguise or just a pregnant owl?
Aesthetic alterations aside, the ship’s actual capabilities are improved with items released by destroying yellow carriers. The way the upgrade system works in The Lost Sunheart is rather confusing though. The most important items are two interchangeable icons for the central firing stream: C (default) and H (a thicker wave shot), both enhanced three times by picking up successive items of the same type. The other items consist of F (partial or full health refills) and B (adds a fire effect to the bombs). Finally, one-time items appear early in the game: T permanently alters the default pea shot to a 3-way spread pattern and S activates an orb that endows the ship with special powers.
These special powers vary according to the selection you make whenever the game is paused. Four extra choices besides the initial one become available as the lost crystals are recovered, for a total of five: 1 (rotating orb), 2 (bombs home on enemies), 3 (two-way shot from an auxiliary force pod), 4 (bullet-blocking shield) and 5 (extra shot stream). 1 and 3 are fired with the main weapon whereas 2, 4 and 5 use button I. Note that special power 4 cannot be used as a permanent shielding resource since each activation of button I merely creates a single shield with very brief duration, only enough to deflect incoming bullets and damage everything that it touches. On the other hand, just like the main weapon (button II), special powers 2 and 5 do benefit from rapid firing, hence the recommendation to have a turbo controller at hand in order to fully enjoy the game.
Given the intricacies I mentioned above, I reckon it's common to find people who have played the whole game without taking full taking advantage of the weapon system. Knowing about the proper use of the special powers, for example, represents a huge advantage against some of the trickiest sections and bosses. On top of that, a few other aspects of the gameplay deserve to be mentioned. Getting hit downgrades all weapons by one power level, and although it's possible to play with speed setting 2 or 3, in a few areas it's beneficial to maximize the flying speed to evade quick attacks. Narrow passages aren't really dangerous because there's no harm in touching walls, in fact leaning against walls or screen borders is what it takes to place the force orb of special weapon #3 above or below the ship.
Eyes everywhere!
(courtesy of YouTube user The VideoGames Museum)
The Lost Sunheart unfolds at a steady pace and does a good job at keeping the interest alive by means of the bizarre boss encounters. That said, there's a recurring emphasis in the enemy gallery with respect to eyes. Weak spots of almost all bosses are an eye or an arrangement of multiple eyes, often attached to demon-like creatures or mechanical machinery. I'd say there's a lot of Parodius in the game as whole, as well as a veiled influence from Darius in level backgrounds and ideas behind some stage designs, including an underwater section that ends with the ship entering the mouth of a creepy whale. Besides, pretty much all enemy waves give you varying bonus points when fully obliterated.
Even though attempting to destroy complete waves and dying to cash in on checkpoints are valid objectives when trying to score, in the long run it's just not worth it. A couple of turrets that spit large fireballs in the second level can be exploited forever if you so wish, thus rendering the scoring system useless. Speaking of which, score-based extends are registered with 100, 300 and 500 thousand points, and if you shoot the floating head in stage 3 long enough you'll also be able to collect an icon for extra life (UP).
Certainly the most intimidating foe you'll come across in this game, the last boss is the only thing expecting players in the sixth and final level. It also seems to have been lifted straight out of one of the Fantasy Zone games. I died a few times when going for the 1CC in the top spot of the table below (there are separate high score tables for both difficulty settings). It was a fun and satisfying experience that only lacked a more compelling sountrack to go along with the decent visuals. 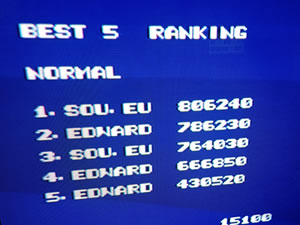