Provided a few basic features are properly implemented, sometimes all it takes to make a game memorable (especially a shmup) boils down to two defining elements: good music and pleasing action. However, there are developers that will do whatever they can to bring something new to the table, which is in every way highly comendable. The inherent risk is that reaching so far into new territory can result in a game that ultimately fails to deliver because something is lost or overlooked along the way, hurting its long term appeal. That’s the case of Stardust Galaxy Warriors - Stellar Climax.
Originally released for PCs in 2015, the game was later tweaked and found its way to the Xbox One, the Nintendo Switch and the Playstation 4. I assume they’re all the same, yet the Switch and the PS4 versions were lucky enough to receive physical releases. Just for reference, the PS4 disc mentions version 01.02 in its opening screen.
Stardust Galaxy Warriors - Stellar Climax adopts a classic horizontal shooter approach with mechas as protagonists in a futuristic setting. Five robots with different specs are instantly available for selection across all game variations, starting with the main campaign mode. Common attacks consist of regular shot (R2) and sword melee (×), whereas specific attacks for each robot can be triggered with buttons □ (special move) and ○ (distortion technique). Note that in order to have the secondary weapon fired with the regular shot you need to activate/toggle it with L1, which makes no sense at all in practical terms. On top of that, the primary weapon can also be deactivated with button R1. Why would you not want all weapons deployed by default, I wonder? Finally, button △ is used to revive friends when in co-op play (up to 4 players can join). 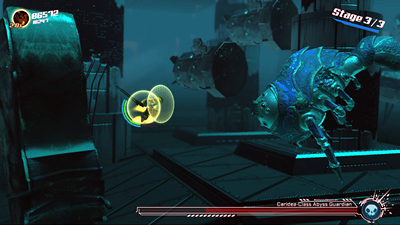 The guardian of the abyss wants to say Hi
Upon selecting the robot, players must then choose the primary weapon (out of six) and the secondary weapon (out of seven) mentioned above. The range of primary weapons goes from basic straight guns, lasers, a flamethrower and a couple of different spread patterns. Secondary weapons add an assortment of lasers and straight/homing missiles with cluster explosions. All weapons vary somewhat in power and rate of fire, so prepare to spend some time testing out all of them to see which ones combine better with the mecha you have chosen. Different combinations might also work better depending on the level you’re playing.
Every stage in the campain mode is divided in three sections, with bosses often appearing in the second and third ones. In between sections you choose one out of three upgrades to improve aspects such as attack power, shield strength, shield regeneration, critical hits (a.k.a. probability-based damage), distortion accumulation and temporary power-up effectiveness. After defeating the main boss you go into a shop where you can buy these upgrades and many more special performance enhancers with the bonus currency achieved for the whole level (transferable to the next shop if not used). Finally, in-stage power-ups that give you the abovementioned temporary upgrades / recovery aids are dropped randomly by destroyed enemies. Robot health uses a two-phase meter composed of shield and armor: shield refills automatically if you stay out of harm’s way, but armor can only be refilled by collecting a particular item.
With varied graphical themes and an enemy gallery that tries to match them, stages are quite unique and distinct from each other. Even though there’s absolutely no interaction with environmental obstacles, graphics are decent and provide a good feeling of flying over eerie planets or exploring the outer space vastness. Action is slow upon start but eventually picks up, boss battles are fun for the most part and the upgrade system allows for all sorts of experiments for aggressive and defensive players alike. All of that culminating in a fight against a last big enemy that's going to fairly test your dodging skills.
So what’s wrong with Stardust Galaxy Warriors - Stellar Climax? In pure gameplay terms not much actually. My only gripe is the occurrence of attacks that can kill you instantly, finishing your run in a single blow. The insect boss in the 5th stage is one such example, and until you figure out his unorthodox charging routines you’ll probably die a few times. And by all means keep an eye out for those vertical lasers in the scrapyard stage (8th), which will also obliterate you no matter how strong your shield/armor is. By the way, the 8th stage has one of the best songs in the game, in a soundtrack that shines and certainly sticks with you after a while. In all honesty, it's the only feature that's truly deserving of the stellar qualifier.
Trailer for Stardust Galaxy Warriors - Stellar Climax
(courtesy of YouTube user Playstation)
The actual problem with Stardust Galaxy Warriors - Stellar Climax is related to the general notion of performance follow-up. Anyone would imagine that a 10-stage long game clocking at almost one and a half hours would have at least a solid, if not engaging scoring system. However, it’s baffling how this aspect is totally thrown out the window. Scores appear both for individual sections and stages, but are reset in every single level. They are also completely unrelated to the currency bonus achieved after you beat a boss. I reckon the ×2 multiplier that gets reset every time you’re hit and goes up again one enemy at a time should have something to do with it, yet this doesn’t matter anyway because there’s absolutely no score tracking in campaign mode.
Another point of concern in campaign mode is that you can change the difficulty setting between levels, which of course makes score tracking useless. There'd be nothing wrong with that as long as we had a campaign course with fixed parameters, but unfortunately no option exists to lock the difficulty setting for a full run. Having nothing less than 11 predefined settings (plus a fully customizable option if desired) is quite a bold decision as far as flexibility goes, but it certainly makes more sense to try all of them when four people play together for sheer shooting fun. And perhaps someone in the shooting party might see a little value in the story mumbo jumbo, which is completely conveyed with plenty of text but no cut scenes or voice narration at all.
The other game variations included in the package are a separate mode with five challenges with specific durations and rules, as well as two extra endless modes with increasing difficulty (Gauntlet has only regular upgrades and Strike comes with shops, just choose the level theme and fire away). These ones keep track of performance, but no distinction is made when you apply difficulty tweaks.
After trying out all mechas I settled with Silver Wolf, the "dasher". He's got a dash maneuver that's excellent to evade bullet barrages, as well as the regular smart bomb to clear things up a little. When beating the campaign mode I paired him with the laser cannon and the proximity rocket (primary/secondary weapons) during the whole game, and for the majority of the run I only purchased special upgrades in the shops. Some of these items are great life-savers, such as the "distortion shields", which fully recharges your shield gauge whenever a distortion attack is used. As seen in the picture below, upon clearing the game without dying you get the YOLO achievement (a good association with the 1CC in this case). I played all levels in the Normal difficulty. Note: you can replay campaign mode again in the same save slot to continue upgrading your mecha. 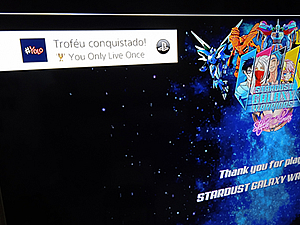