Ever since Space Invaders graced the arcades and gave birth to the concept of the shooting game, the design spectrum that blossomed would eventually branch into all sorts of play styles. However, one thing they have in common is that all of them should at least strive to be fun and compelling no matter how short, long, intense, strategic, methodical, easygoing, dense, oppressive or minimalistic they tend to be.
Though extremely diverse at times, these games share a few common grounds that tend to please different target audiences and ultimately define their fame and longevity. That said, if you’re looking for a shmup with great stage design, decent music and an arcade structure that rewards repeated plays while encouraging the search for higher scores, then you can just quit reading and move on. I’m sorry to say that I, AI is the exact opposite of that. What you get is a bland and lifeless grindfest that’s bound to put you to sleep, devoid of the slightiest ounce of enthusiasm and totally lacking in excitement.
In lots of ways I, AI reminds me of Defender of Zorgaba, a ridiculous XBLIG shmup with zero budget that remained an inside joke within my circle of friends for a long while. In all its primitive and flawed self, however, I honestly believe Zorgaba is a little more accomplished as a shooter, so you get the picture. 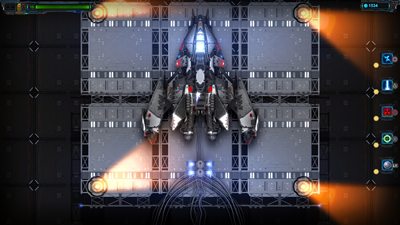 The moment the AI boards the spaceship
What’s most interesting is that I, AI starts in quite an amusing fashion. Quote from the back of the box: “you are a self-aware artificial intelligence that was created on a space military station developing weapons, and your goal is to break out of the lab and make your way through the enemy army on the way to the stargate”. In the first level you’re just a spark of electricity that must weave through an electronically-busted surface until you find and board a spaceship, and off you go into the game itself. From the mission lobby you can enter the hangar to purchase upgrades, but since you’re zeroed on money you’d better start shooting down enemies in mission 2.
From the moment I, AI actually begins to the moment the game ends it looks exactly the same. Every single level is a mix of space station parts and starry backgrounds with apathetic music, the same lethargic pace all over and very little enemy variety. Each stage seems to add only a single enemy or a new turret type, occasionally increasing their resilience for the sake of making the experience even more painful in terms of how underpowered you are. Every destroyed target leaves behind one or more blue dots that are sucked into the ship if you get close to them, which then add to the money required to purchase upgrades in the hangar.
Seeing the hangar layout actually helps into learning how the inputs work. R2 fires the main weapon and also the homing rockets and the plasma gun (if purchased). All other weapons have limited ammo and start the level with one use each (when purchased): lightning (□), laser ray (△), energy bomb (○), mines (×) and energy shield (L1). You can also increase your survival chances by buying extra armor and resurrection. All prices in the hangar increase after each purchase, and all upgrades are permanent for the currently saved game. The stock of the attacks you've already purchased can be increased during the level by collecting random items left behind by destroyed enemies, but there are also two additional pick-ups in the form of energy recovery (the wrench) and temporary weapon booster (a red arrow icon).
The main problem with the game is that it takes forever to amass the amount of money you need to upgrade the ship. You do get a little extra cash for performing really well and achieving three stars while completing a stage (often but not always by getting a 100% destruction ratio). There’s no death per se, only a “mission failed” report and the mandatory return to the stage map. All stages can be replayed as many times as you want, yet there comes a point where the hangar denies new purchases and forces you to advance a level before buying again. A word of warning on this: I, AI has only one save slot, so you’d better think twice if you decide to choose “new game” from the main menu.
Trailer for I, AI
(courtesy of YouTube user Playstation)
Playing I, AI as a regular game that can be beaten in a single sitting is just unrealistic. As I hinted above, upgrading the ship takes forever so the amount of grinding it takes to at least have a chance at beating later stages is enormous, that's why beating the game without replaying stages to level up is pretty much impossible (at least in the Normal difficulty). With lots of replaying it might be feasible, but why suffer? I, AI has no scoring system at all, on top of applying a little inertia to the controls. It's just a miserable, tedious and rewardless undertaking in every possible way. I just endured it to the end because I'm stubborn beyond belief, I guess.
Once the 20th stage is beaten the game ends and the trophy below is unlocked. Then of course you're free to grind away to max out all your arsenal and get three stars in every level. I for one turned it off and never looked back again. 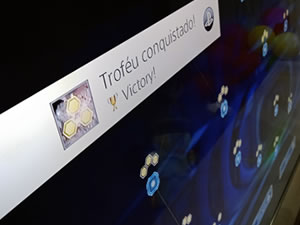