On an overlooked system, overlooked shooters tend to be even more underrated than your usual underappreciated game. And among the glut of 16-bit shooters that found their way to home consoles during the 90s, Android Assault is one of the prime examples of what I've just written. There seemed to be some indecision as to how the publisher wanted it to be named in North America, because actually the game title screen doesn't display Android Assault, instead showing the Japanese original Bari-Arm. And then again, the US release has The Revenge of Bari-Arm as a subtitle. Let's call it Android Assault then, just because it's the cooler name.

Everyone who wants to know what a good 16-bit shooter is about (especially younger gamers) should take a look at Android Assault. It is a very good representative for the genre in its time period, with a great futuristic setting, a decent challenge level and the most important feature of all when it comes down to playing video games: providing instant fun from credit 1. Some games take a handful of credits to grow on you, some only start to get compelling by the 3rd stage and others won't give you a break at all into their sometimes intricate designs. The fun in Android Assault, however, is guaranteed up front by competent graphics, spot-on gameplay and an outstanding rocking soundtrack. As much as I would like it to happen, you just don't see this kind of music quality in today's shmups anymore. Android Assault sort of remains as a moment frozen in time regarding video game music, a void between chip tunes and the digitally orchestrated stuff that would become more prominent in the next gaming generation. 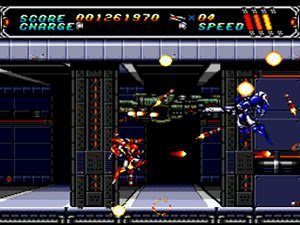 You are the red robot, and the blue guy is one of the several robots that tries to spoil your mission

Starting out as a regular spaceship tripping through a forest planet, soon you will transform into a robot after you acquire the 3rd power-up. The robot form reminds me of a larger version of the character from Lords of Thunder, but the transformation isn't merely aesthetic. Not only do you get an extra protection (like a shield, for which you revert back to the ship form when hit), but you'll also charge the currently used weapon at a faster rate. Weapons are available in four variations that can be exchanged with the proper icon. There's the vulcan (yellow), laser (green), homing missiles (red) and straight daggers (blue). All of them have more powerful blasts that can be activated just by restraining from shooting, which fills up to 3 levels of the charge meter. Triggering the fire button after that will then release the weapon's strongest attack. These charge attacks were, in fact, key points for me to weave through the game, so take this as a hint if you want to. :)

Powering up happens by collecting the "Pow" icons or icons of the same color of the current weapon, whereas the gray icon transforms the ship into the robot regardless of the current power-up level. There are 4 speeds to select at the press of a button, which gives good maneuvering possibilities inside fast passages or claustrophobic parts. While the game generally scrolls at a slow pace, there are some enemy clustering in later stages and a few dead zones here and there (I like to think of them as the game's way of telling you to stop shooting and charge the weapon for whatever menace comes next). The important thing is that you never feel bored.

Experienced shmuppers will certainly recognize a series of references to other shooters of the time, such as Eliminate Down (start of stage 3), Thunder Force IV (the whole stage 4), Gradius II (the high speed section of stage 5) and Down Load (stage 7 - you even get to destroy two hoverbikes from the game as soon as the level starts!). Bio-Hazard Battle also comes to mind as you descend from outer space to the ground in the 6th stage. This is one of the levels that have mid-bosses, which frequently join the enemy armada headed by the sometimes gigantic bosses. They start as large robots, evolve to large ships and culminate in a very nasty bio creature in the last level. Most of the bosses are better handled with specific weapons, and some of them will die very fast when attacked with the charge shot.

With 5 spare lives upon game start and extends granted with 100.000, 500.000 and for all million points afterwards, it would seem that things are on the easy side for the player. Appearances are deceiving though, since you'll certainly need these lives during the last couple of stages. Enemy fire leaves less and less room for movement and demands precise positioning of the character's hitbox, especially in the robot form. Completing a very well rounded package, Android Assault comes with a nice narrated/animated intro. Seeing all that's put together here, I just wonder what Human Entertainment could've achieved had they continued in the shmup development business. As it is, this game stands as a great Sega CD exclusive, one that's fortunately reasonably priced and therefore deserves a warm place in every retro collection.

This was my best high score on NORMAL: 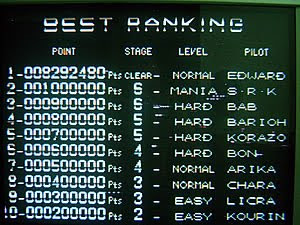