Since the end of Vic Viper’s mission in the groundbreaking Gradius, it was just a matter of time until it would again be called up for battle. It took three years for Konami to release a sequel, a game that expanded on the original concept in every possible aspect but mostly with an improved graphical design and a considerable increase in the challenge level. If the core gameplay remained the same the result couldn’t be less than awesome, right?

On the Sega Saturn, the sequel appears in the Gradius Deluxe Pack compilation, alongside Gradius. As much a classic as Gradius was/is, it’s clear that the evolving arcade scene needed a more juicy game. Therefore the scope of Gradius II, as far as sequels go, is nothing less than a full blown improvement. Every stage has a unique boss, as opposed to the multi-purpose Big Core. The volcano (4), moai (5) and fortress (8) stages are back, together with fire snakes amidst flaming suns (1), a mesh-filled alien base (2), crystal debris roaming everywhere (3), a high speed scramble (6) and a boss rush with returning bosses from Gradius and Salamander (7). The power-up system is unaltered, but now it’s possible to choose one out of four available weapon arrays, with different types and combinations of missiles, lasers and double shot + the option of selecting between two shield schemes. Every array has its pros and cons, but my favorite is still the classic one from Gradius. As part of the batch of influences from Salamander, the ripple laser makes its debut in the series. Some people like it, some people don’t. I prefer the good old regular laser and the original frontal shield. :) 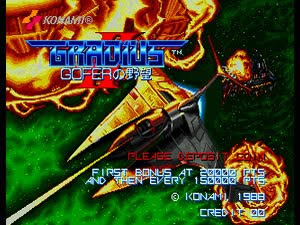 One of the most prominent aspects in this game, which carries the subtitle Gofer No Yabō (meaning "Gofer's Ambition"), is how it leaves progressively little room for error as the stages unfold. The first couple of levels are fine, even relaxing, but then you arrive to the crystal field and face the first real threat. Upon dying in this section, it’s so hard to survive that restarting is a much more feasible option. It is possible to continue through the icy blocks completely underpowered, but the chance of success is practically null. Some further checkpoints are equally hard to recover from, but by then you’ve come past the point of no return (I felt this way at least) and recovering from scratch after dying becomes a job in patience and perseverance. You even get to incorporate the “carryover” power-up capsule into your survival strategy - if one of the cells in the weapon array is lit when you die, the unused power-up becomes instantly available upon respawning, even if you use continues. The last stage is particularly brutal in this regard.

The ever-so-hated/loved rank, which is basically related to how many options you have activated, is deepened by a new special enemy that appears whenever you survive long enough with 4 options. A scorpion-like creature comes from behind and sweeps forward after a few seconds, trying to take the options away. It’s not possible to destroy it, so it’s necessary to maneuver the ship in order to flee from its claws and avoid the inevitable loss of firepower. The worst scenario is when the creature grabs the option that’s closest to the ship, since in this case all options are lost. While it’s easy to avoid it when the screen in relatively empty sometimes the thing appears in pretty hairy situations, such as during the fight with the third boss or during the vertical cylinder of the moai stage. Everything considered though, there are instances where losing one or two options isn’t that bad, simply because it lowers rank while still leaving enough firepower to deal with difficult sections and bosses.

Pursuing the 1CC in Gradius II is a much harder task when compared to Gradius. This happens because regardless of how much power you have the game will always present itself as an overwhelming, oppressive challenge. Enemy fire is relentless, and all the trickiest parts of the stage design demand perfect positioning if you want to survive. On top of that, Konami eliminated the extend fest that was Gradius by allowing extra lives only with 20.000 and then for every 150.000 points afterwards.

In essence, Gradius II is a damn fine example of a tough shooter, one that’s nice enough to keep you coming back but brutal to the point of frustration, forcing you to devise a strict, reliable strategy for every stage and keeping you on your toes all the time during the process. Dull moments are very rare and for these I can only name the first couple of stages and the intermissions in the boss rush of the 7th stage. By the way, dying anywhere in this level sends you back to the beginning to fight all bosses again. How cool is that for a checkpoint based shooter?

Beating the last boss with no power-ups isn’t good at all to start the second loop, because chances are you’ll be instantly crushed by the first drone waves of the pre-stage. This is what happened to me in the high score below. [EDIT 2012-10-05] Regardless of how powered up you are when you beat the game, you'll always start the next round with a bare spaceship. I played on NORMAL with WAIT CONTROL OFF (arcade slowdown disabled - contrary to what happens to Gradius, where you have to unlock this option by beating the game, here it’s available up front).

I’m not proud of this miserable, shameful score, but alas… the 1CC mission was accomplished! 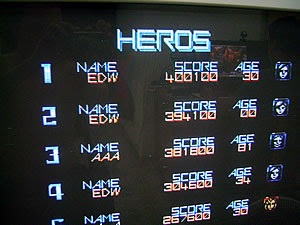