For my first beaten shmup on a handheld console, I think Platypus is OK. It's a port of a budget PC title, and from what I've noticed it surely preserves the original feel and core gameplay, with a few minor diferences in bullet count, character sizes and score display effects. In a world where everything is supposed to be designed and molded with clay, this game stands as a very traditional and completely old school horizontal shooting experience. There's nothing wrong with that, really. Nevertheless, taken as it comes, it's advisable not to carry high expectations when playing this little colorful game, be it for the fun factor involved (which varies heavily depending on what kind of shmupper you are) or for the inherent duration of a desired run (which takes over an hour for the full game).

According to the map shown as the game starts, the adventure of the yellow ship against the forces of Collosotropolan takes place in 6 stages, each one divided into 5 areas where the last one is always inhabited by the inevitable boss. Charm and uniqueness is the main contribution provided by the claymation technique, a characteristic that stands out in the flashy colors, in explosion animations, in a few backgrounds and in the growing damage shown by larger enemies. Every stage has a unique theme to it, developing as the game unfolds with no interruption between areas. However, as this design choice is stretched along a rather lengthy duration and chunks of backgrounds replicate themselves in a tiled fashion, the overall sensation is that there's not much variety to the game. This isn't helped by the fact that Platypus is populated by a handful of recurring enemies from start to finish (mainly flying saucers and stray airplanes) with a few intruders in-between. Boredom and tedium aside, at least I think everybody agrees that this game has great music. Too bad it's not possible to listen to it properly due to the loud sound effects and the lack of a volume adjustment option. 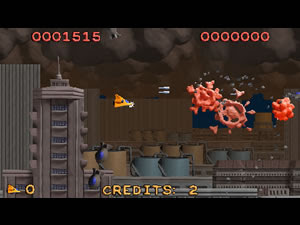 Flying through a factory-type stage and blowing clay enemies into pieces of... clay?

The concept for the gameplay couldn't be more simple, since there's only one button to be used. Destroying a particular series of enemies releases the star power-ups: yellow for spread shot, blue for rapid fire, green for a bullet-cancelling arch and red for rockets (the color of the star changes as you shoot it). It's pretty standard fare, except for the minor detail that all single power-ups last for 20 seconds only. To keep using them you have to collect more stars, adding to the power-up timer up to the limit of 99 seconds. There aren't any bombs or shields but, as a compensation, power-ups are not lost when the player dies. All larger enemies yield fruit after exploding, and these can be worth a great deal of points.

When the screen gets too heavy with fruit and enemies the most severe flaw of the game comes up: bullet visibility. Bullets are so small that it's pretty common to get confused in the mess of collecting fruit amidst exploding clay. Some people will definitely find cruising endless landscapes with the same power-ups plain boring, to the point of not having patience to go beyond the 1st stage. But for those who are patient enough, level 2-3 brings up a little bit of motivation to go on. A small box carried by a tiny balloon hides an icon that gives you two pods that rotate around the ship, making your firepower 3 times more effective. In stage 3-3 another box/balloon with a golden crown inside grants a ×2 score multiplier. Getting these special items is a bit tricky, because you have to be very careful not to shoot the balloons and see the boxes fall back to where they came from. Careful shooting is especially recommended prior to boss battles, which is where these balloons are most easily obtained.

With a naked ship the only good power-up is the rapid fire (blue), but playing with the additional rotating pods feels like a whole different experience. You'll be angry if you lose them, because facing later bosses with no pods takes forever. Let's not forget about the special mega powerful green lightning laser available in the last stage, acquired by collecting the permanently green star. It's the ultimate power-up!


1st stage of the PC version, with a slightly larger ship and slightly different sound effects from the PSP port
(courtesy of YouTube user HuMoDz)

I don't know if it's just me, but I feel that the hitbox in Platypus in a bit unfair at times. The ship's fast fixed speed obviously helps, but I can't avoid thinking that sometimes the yellow hero is sort of "attracted" to enemies and bullets, in situations where I die horribly when I'm almost sure I shouldn't have. Well, it takes a bit of getting used to, just like in every other shmup... And in Platypus, as soon as you get a hold of patterns and enemy placement, breezing through the game becomes routine. Collision with walls inside the cave stage is harmless, and bosses become strangely easier as you get closer to the end.

Area bonus is based on destruction rate, and the maximum value is 10.000 points for a 95% to 100% ratio. The game is pretty crazy about extends, starting with 5.000, 10.000, 20.000 and for each 20.000 points for a while, extending this interval as you rack up hundreds. I couldn't figure out how the end of game bonus is calculated, but it's rather substantial. Besides the main game (story), with possibility of co-op play when hooking two PSPs together, there's also a survival mode available.

This is my Platypus 1CC high score, playing on NORMAL: 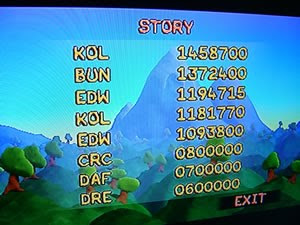