Mixing genres is a risky endeavour for any video game developer, and for a small shmup dev such as G.rev it could be seen as a true shot in the dark. Therefore, I think it came as an absolute surprise when the company released Senko No Ronde in the Japanese arcade scene. It wasn't actually like Virtual On, which is regarded as its main inspiration, simply because the gameplay occurs in pure overhead 2D instead of 3D.

Wartech - Senko No Ronde is the new name the game received when released in the US for the Xbox 360, complete with the arcade revision (dubbed Rev. X). It's a region-free edition, so I decided to get this version for the sake of manual readability. My general perception is that it wasn't well received by worldwide shmup fans, but at least in Japan it must have had some degree of success. After all, the sequel Senko No Ronde Duo just recently hit the Xbox 360 library as well. Back in 2005, even if the original Senko No Ronde sucked hard you'd have to praise G.rev for the boldness of making a fighting game with shmup mechanics. It's not the other way around, really, since the main objective in the game is to defeat several opponents one after the other in order to get to the final boss. The shooting aspect comes in through (1) the special powers each character is able to unleash upon the others and (2) during boss confrontations.

Senko No Ronde is remarkable for some unique gameplay traits that immediately set it apart from similar titles out there. They're all very distinct and warrant the series with its particular and unmistakable trademark, yet they are alien enough to put off both fighter and shmup addicts. This is why an open-minded approach should be taken by players from both backgrounds, and the good news for all is that there are several online guides that can help people out on the process of learning how to properly play the game. Some pretty good starting points can be checked here, here and here. 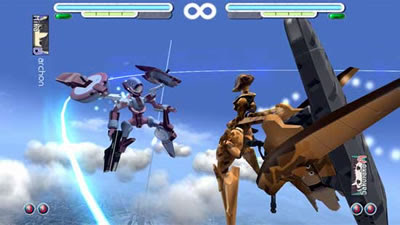 For obvious reasons, I won't delve into all aspects of the gameplay in this text, so I'll quickly go through the points I consider important for a newbie (as I was weeks ago) to know. In Senko No Ronde, every character pilots a "rounder", which is how the combat suits are called. As expected, all rounders have unique features, and you can even choose between two variations of each, in what is called "cartridge" (A and B). This cartridge selection provides minor changes to the character's firepower, speed or combat behaviour. Complementing the character's lifebar (armor) you have a charge energy gauge, which is used to fuel your special attacks. As a step up from the original arcade controls, the Xbox 360 controller interface maps several combined attacks to single dedicated buttons, making use of nothing less than 7 buttons out of the 8 available:
Aside from the basic weapons and the special attacks deployed with the barrage button, button combinations and close combat come together to complete the bulk of the gameplay. Button combinations involve main/sub weapons being triggered while dashing (A) or using the barrier (RT). Close combat is all related to positioning: there are two circles around each rounder - the outer circle represents the reload cycle of the main weapon (X) and the inner circle represents the reload cycle of the sub weapon (Y). Whenever you enter the opponent's outer circle, activating these weapons will result in melee attacks.

After taking a determined amount of sequential hits, the rounder will enter a state of dizziness (a "down"), a very good opportunity for the opponent to invade his enemy's circle area in order to engage into close combat. However, too many hits will activate the anti-field, a protection circle that nulifies bullets and renders the player invincible for a short while. In order to defeat an opponent you have to take him down to the "vanish" state, where victory is just one hit away. As a last moment counter measure, activating BOSS mode while in "vanish" will grant an even more powerful BOSS for to the player in peril (BOSS modes have separate lifebars which are dependent on the current charge gauge).

It sounds complicated, doesn't it? Granted, I concur that Senko No Ronde is an acquired taste. It takes time to really get to know all that's needed to perform well with a character, be it against a friend or against the computer. When playing solo, there are two ways to enjoy the game. In Story mode you choose a character and go through just a few stages to see how his/her storyline unfolds. There are lots of dialogue (in Japanese with English subtitles) and cut scenes, all related to how humanity left the planet because of a whining girl (really!) and developed these crazy powered suits to survive in the future.

The absence of any scoring didn't motivate me to dig any further into Story mode though. For us shmuppers, the real fun is in Score Attack mode. There you have a proper scoring system that encourages energy preserve, perfect/fast kills and BOSS eliminations. Starting out with 1 + 2 lives in stock, there are 10 stages where all of the 8 rounders must be fought. Advancing to the next stage will replenish 50% of the lifebar, with no increment on the charge gauge or the BOSS stock. However, an extra life and and extra BOSS are awarded for 1, 3 and 6 million points achieved. The 5th and the 10th stages are regular boss confrontations against a huge spaceship and a squid-like monstrous creature. This is where the game sets the foot fiercely in its shmup roots, with an overwhelming bullet hell challenge awaiting in the end. The most frustrating aspect of all is that you have only one chance to fight each boss in the 5th/10th stages. The good thing is that even when you're defeated by the last boss you still get your high score into the worldwide leaderboard - it has to be in one credit though. In the end, bonus points are awarded for all remaining lives/BOSS in stock.

Visually, Senko No Ronde is effective and overall pleasing, though not much of an eye candy. I think it could've used a little bit more detail, but it's fine as it is. I can't help but feel a kind of detachment from the background when I play though, because I just can't pay attention to anything in the graphics besides my enemy and myself. Controlling the rounder looks kinda floaty up front, but it gets better as you play. Musically speaking, sometimes I noticed a few throwbacks to the music style from Border Down, G.rev's previous shmup.

Everybody knows that mastering a fighting game takes months, maybe years. As much as I enjoyed learning some of the techniques in Senko No Ronde, I just can't dedicate myself for that long anymore. Early on I had my objective with the game very clear: beat Score Attack mode with Mika A (cartridge A) with both bosses defeated. Mika is that classic androgynous anime character, and I chose him because I think he's got some of the best shooting combos and an extremely powerful BOSS form. My main attack strategy was doing the barrage full range attack (semicircle + barrage) followed by missiles (Y) and a stream of the main gun (X). The rest consisted mostly of getting used to every enemy and boss pattern, and I have to say that the last boss is one of the greatest last bosses ever - a real bastard! Lili was the easiest opponent, Ernula the most treacherous and Fabian and Karel the most powerful.

I didn't get to play against people on Live because I don't have a gold membership account. Am I eligible to a decent fight locally? I wouldn't know, I actually don't know anyone who could play this game with me.

My high score is shown below, both bosses properly defeated. It's a measly score when compared to most of the crazy high figures from over 200 players, but I'm happy with it. 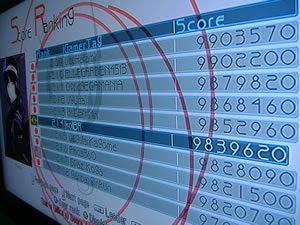