Namco might be completely out of the shmup spotlight today, but there was a time when the company did participate and even established minor trends within the genre. Albeit being the creator of the first vertical scrolling shooter in history, it is true their catalogue didn't attract that much attention from the masses throughout the 80s. If you dig deeper into it though, there's a chance you might find some interesting and overlooked games waiting to be appreciated. One of them is Dragon Spirit, one of the many evolutionary steps taken from Xevious and fortunately one of the most ported titles from Namco.

The game is a fantasy themed vertical shooter where the hero turns into a dragon in order to rescue a princess that's been kidnapped by a bad guy: a classic storyline for a very straightforward shmup. It's possible to play close arcade conversions of Dragon Spirit on the PS1, PS2, PSP, XBLA and PSN, with other ports available on the PC Engine, NES, Atari ST, Commodore and Amiga. I decided to go for the PS2 version available in the Namco Museum 50th Anniversary compilation, mainly because I thought it would be one of the most accurate ways to experience the game in a home console. However, as I was playing the game and reaching the last stages consistently, I finally got my copy of Namco Museum 5 for the PS1, which also has Dragon Spirit. Suffice it to say, just by seeing the first stages I realized this is one of those cases where the game plays better on the PS1 - the PS2 version slows down in busy parts, with softened graphics and firing controls that are a bit dodgy.

But you know what? I'm stubborn. I'm fierce in my objectives. I had started the journey on the PS2, and I would end it on the PS2! 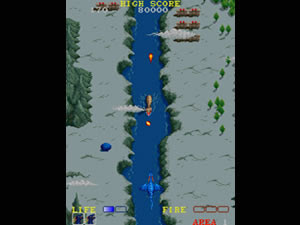 What? A swimming dinosaur and a shiny blue egg?

I don't know about you, but I think there's something bold and attractive about transforming into a dragon and toasting half the world to rescue a beautiful girl. Dragon Spirit will quench such an aspiration in nine increasingly hard levels, some of them being quite long and tricky. The first thing you see as the game is started is your transformation, which is followed by campaigns over dinosaur populated valleys, lava creeks and volcanos, marshes with magic trees, deserts, moving caves, glaciers, underwater passages, a pitch black chamber and a final showdown in a castle ridden with treacherous wall gargoyles and extremely narrow passageways. Every stage has an unique setting and feels completely different from the previous one, with an astonishing level of variety that also extends to the nice soundtrack, a pleasing collection of tunes and themes that evoke the game's mythical style with haunting efficiency. In this regard, you can see the game as a precursor to Phelios.

Just like in Xevious, there are two types of attacks in Dragon Spirit. Normal fire will hit airborne enemies, while ground enemies must be hit with ground bombs. As indicated by the health bar, you can get hit once before dying, with no possibility at all for health recovery. It's generally good advice to get used to the size of the dragon from the get go, because with every blue orb collected he will gain an extra head. You can have up to three heads, which will considerably increase the firepower range. Just like blue orbs, the orange orbs can be collected by bombing colored eggs placed on the ground. These orange orbs add to the power-up meter in the lower right corner, and for every three orbs collected the power will be boosted to a new level. In the final power level the dragon will fire very powerful flame streams that can pierce through walls, as well as enemy armor. Although this sums up the basics of the gameplay, the extra icons achieved randomly by hitting blinking enemies are what gives the game its very special feel.

Besides the regular blue/orange orbs, extra random orbs can appear in the following flavors: invincibility shield, homing shot (not as effective as it might seem), earthquake (kills all ground enemies as they enter the screen), shrinker (reduces the dragon's hitbox, leaving him with just one head), spread shot (dragon turns white), diamonds for extra points, 10.000 points (yellow orb), 1/3 of a 1UP (pink orb, get three of them to "hatch" an extra life), the ultimate flame power-up (dragon turns green), expanded eyesight (only in stage 8) and the dreaded power-down (black orb). Some of these orbs are very handy in certain parts of the game, and should be dealt with accordingly. The spread shot, for instance, is great to take down lots of enemies, but it's bad against bosses because it's weaker than the flame. On the other hand, the flame has a dead zone right on the dragon's nose, where up close enemies will go unharmed and kill the player by contact. It's really annoying and quite deadly in the claustrophobic last stage. Shrinking the dragon is good but leaves him with only one head, while growing others will get him back to his normal size. Dying sends the player back to a checkpoint, but all current orange orbs or any hatching icons are preserved (note: in the PS2 version the hatching icons are even preserved for a new credit!).

Dragon Spirit is a game that demands the player to thoroughly study its stage design and enemy placement in order to succeed. Bullet count isn't that overwhelming - it's quite tame to be honest - but weaving through some sections can achieve a puzzle-like nature at times. Unless there are spikes (caves and glaciers), it's pretty safe to lean against walls and try to herd a few bullets for better maneuvering options. It also helps to have a controller with built-in autofire, since this feature is completely absent from the game. Scoring is totally straightforward, so keep an eye out for those valuable yellow orbs that are worth 10.000 points each. Two score-based extends are granted with 80.000 and 180.000 points, but most of the extra lives will come from the egg hatching with pink orbs. If you're lucky, that is.

Talking about luck, I need to report a weird bug in this game. Whenever I reached the 4th boss (the bone dragon) with 3 heads and full power, 9 out of 10 times he would cheat on me. First I would be hit without being hit, then he'd be invincible until some crazy fast homing bubbles would crush me. Upon dying, if I grabbed the power-ups just before the fight he would do this again. Remedy? Grow just one extra head and don't get any flame power-up. If a shrinking icon comes before the boss fight, grab it and avoid growing three heads. I call this a bug because I think it's pure computer cheating, but I don't know if this is actually inherited from the original arcade game. Could someone help me out?

Namco reportedly released two versions of Dragon Spirit, known simply as OLD and NEW. I heard the main differences apart from changes in stage design are that the NEW version has a faster dragon and hit detection is improved. The PS2 compilation from Namco presents the game in the NEW version only, and it compensates the lack of continues by allowing the player to choose any stage to play when starting a new game. That helps a lot with practicing! The difficulty settings here are unique, since 1 equals NORMAL, 2 equals HARD and 3 corresponds to the EASY setting.

It's always good to see one's dedication pay off in a game that's so punishing, so I proudly present my current high score for this version. It was played on NORMAL, with a turbo controller for proper autofire (wrist damage GTFO!). 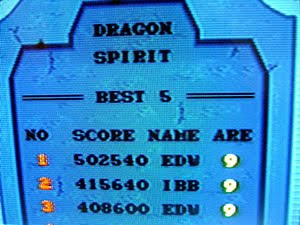