As much as I have tried (and I did try) I never liked RPGs. They are the exact opposite of shmups as far as pure gameplay goes, and I just can't afford spending so much time on a game I will probably never touch again once it's over because it's so damn long. I'm mentioning this because visually Twinkle Tale bears a strinkingly familiar look for those who enjoy 16-bit RPGs. The overhead perspective, the graphical flare and the heads-up display all give people the wrong idea, but the truth couldn't be more different, for Twinkle Tale is plain shooting fun in its purest form. No EP, HP, puzzles or talking bullshit, you just blast everything with your magical powers while in control of a cute witch heroine.

The game came out only in Japan, and was developed by a really obscure company. It is a highlight within the Mega Drive library because it mixes the multidirectional shooting style (reminiscent of Commando and Kiki Kaikai) with pure vertical sections, namely the boss battles and the whole stage 7, where the game turns into a sort of vertical Cotton. The whole fantasy theme is coherent and remarkable, with lots of creatures, both cute and demonic, represented in a multitude of colors over an exquisite art design. With no frantic gameplay, the relaxed pace of the game combined with the great atmosphere works perfectly to provide a nice, easygoing challenge. 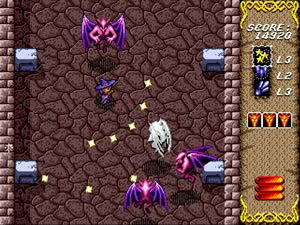 Attack of the evil gargoyles

Controls in Twinkle Tale are pretty functional. One button fires, another button cycles between three types of shot and the third button activates one out of two magic spells. The shot types include the obligatory spread pattern (which fires tiny stars), a straightforward weapon (the most powerful one) and a stream of homing spheres. All of them are powered up by collecting the small star icon - the current shot is powered up first, but it's not necessary to switch to the others in order to power them up. Magic spells are stocked and stacked up to three by collecting magic items. The fire magic will cause three columns of fire with dragon heads to wipe the entire screen, while the ice magic will fire three huge ice spheres with some mild homing capability. Both are very useful in tight situations because they block all enemy fire that's caught within their range.

Getting hit makes you lose one block of health, and as soon as the last one is depleted it's GAME OVER. Thankfully, health replenishers are spread out everywhere. After defeating some bosses senior wizards will appear and also grant permanent extra health blocks, so by the time the last boss is reached you have 8 bits of health. These wizards seem to give the heroine a few advices in the form of text dialogue, but luckily these can be properly skipped. Speaking of which, the game does have a somewhat detailed story going on, but I can't figure out anything because I don't know Japanese. However, if you're into playing through emulators, there's a translation patch provided by this M.I.J.E.T. guy/group for your emulating pleasure.

Besides all of its pleasing presentation and spot-on controls, Twinkle Tale does come with a severe flaw regarding gameplay. There's a point in the game where it's possible to just stay put and milk enemies forever until you reach the counterstop. So it doesn't matter if all surplus health and power-up icons are converted into points, because this kills the validity of any scoring. It's in the middle of the 3rd stage, just before the moving platforms high above in the sky. The trick is definitely gamebreaking, but since this is not a checkpoint title, arrangements can be made for low score challenges or speed runs. I must also point out that continuing doesn't reset the score, even though it sends the player back to the beginning of the stage. There's some slowdown here and there when the screen gets too cluttered, but it's nothing really serious.

On the Mega Drive, shmuppers craving for something similar but a bit more manly or aggressive have the option to go for Undeadline or Technosoft's Elemental Master, which I consider to be superior games. Twinkle Tale's fantasy-driven settings and competent albeit unremarkable musical arrangements are still a treat though, rarity ratings obviously not considered.

I did not do any milking in the 1CC high score below, playing on NORMAL. 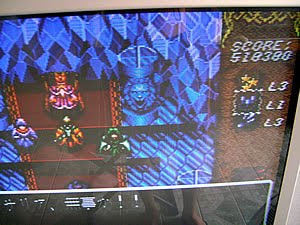