Starting from the 16-bit generation, almost every home video game console got its own port of Raiden, the game that defined developer Seibu Kaihatsu's portfolio and marked the lives of a whole generation of arcadegoers. The SNES was included in this porting batch one year after the Mega Drive and PC Engine versions came out, so it was sort of expected that it would top the competition. However, something must have gone awfully wrong during the process because the results left a lot to desire. Maybe the coolest thing I can mention about it is that it has the "Trad" in the title. Only recently did I get to know that it relates to "traditional". And I love this title... Raiden Trad. Way cooler than just plain Raiden, but I guess I've already written about it, haven't I?

There are 8 stages of vertical action in this game. You play 5 of them on Earth and the rest in outer space, after finding out your base has been destroyed by the baddies, an alien race known as Carnassials. And that's all that's needed to know about the story. Gameplaywise, the SNES version preserves from the arcade original a couple of essential aspects: (1) the lack of checkpoints and (2) the possibility for co-op play. On almost everything else, the developers responsible for the port did a heck of a shitty job. Simply put, Raiden Trad on the SNES is a simplified, watered down, butchered conversion that unfortunately smears the good name of the game with utter shame. 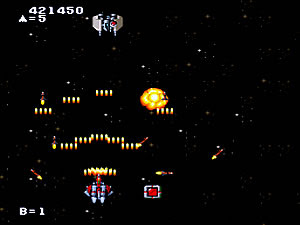 Behold the Black Void of Death

Sure the basics are all there. Vulcan (red) and laser (blue) weapons, straight (M) and homing (H) missiles, bombs (B) and flags for end of stage bonuses (flags collected × bomb stock × 1.000). This is Raiden 101 indeed. Execution, on the other hand, is a mess that's even worse for those who are familiar with the original game. One of the most noticeable things is the awkward frame rate. I guess they tried to counterbalance this by making the scrolling speed faster. This faster scrolling isn't all bad actually, there are times when even I get the feeling the original game should've scrolled a bit faster.

But then you arrive at the first bunker with a missile power-up, you take the H icon and go WTF on your SNES. Yes, those charming green homing missiles were degraded to dull, mud-colored chasing rockets that look like shit. They won't change, they won't get any closer to how they should look. Then maybe one or two stages down the road you get the feeling something is wrong with the enemies. Those mid-sized and even the big tanks die too fast, sometimes they don't even have time to shoot. The power-up carriers and the missile power-up boxes will always release vulcan and homing missiles when destroyed, so the expected unpredictability (odd expression this one, I know) is simply gone.

That's not all though. Extends are only given by 1UP icons, there are no extra lives based on score. Most of the flags you collect for points are absent from the game. Stage 3 has only one flag, and stage 6 has none (more on that later)! The location of the fairies, which grant you a fresh offering of power-ups when you die, is completely rearranged, and you get no points by taking them. The same happens with the full power icon (P), which is worth nothing when you get it while at maximum power. It doesn't matter where you deploy the bomb, it will always explode in the middle of the screen and nulify all bullets within and outside its range (extra bombs are also very scarce). Now check this out: with the exception of the meteors in stage 6, you don't die by colliding with enemies. This means you can fly over them and you just won't die! Gosh, why do I smell a pre-historic Takumi influence here?

I feel weird because this text feels like a rant. But alas! In essence, you can live with all of these changes I have mentioned. They don't break the game, they don't make it unplayable. However, we must not forget that this is a port, and comparisons to the original or to other ports are unavoidable. That said, the worst thing about Raiden Trad on the SNES is how easy it is, especially if you've beaten one of the other available versions. Nevertheless it has peaks of unbalance such as the 2nd boss, whose small planes also shoot bullets and make this particular boss fight a lot harder than all other bosses. I dare to say he's the toughest one of all.

There are other changes to the game besides the ones I pointed out above, but I will mention just one more: the Black Void of Death. That's the name of the 6th stage, as printed in the game's manual, and it nails it in the head. This particular level consists solely of tiny stars in a flat background from start to finish, so no ground enemies and ground power-ups, sorry... All the terrain was removed! Or was it perhaps sucked by a giant invisible black hole? We'll never know!

I can't really stress how disappointed I am with this game. I think I could've tried to figure out a way to no-bomb the 2nd and 3rd bosses in order to boost my score a bit, but things such as having stages with practically no flags to collect helped kill my motivation. In the 1CC high score below I beat the game with no bombs left, but I didn't lose any lives. 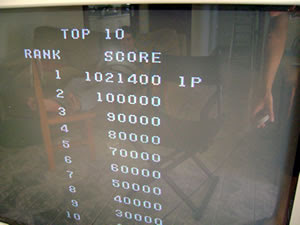