Contrary to what I had thought when I first heard about it, Wonder 3 (referred to as 3 Wonders outside of Japan) is a full blown arcade game instead of a compilation of separate titles. Once a coin is inserted you’re given the choice of three games. The first one is the platformer Roosters (or Midnight Wanderers), which plays and feels like an improved version of 16-bit Hook. The second game is the horizontal shooter Chariot, which sees the same ugly dudes/elves from the first game being summoned by a fairy to rescue a captive princess. Both games share the same overall colorful style and sort of complement each other. Don't Pull, the third game, is a puzzler. I can’t say much about Roosters or Don't Pull, since I haven’t played them at all, but a few weeks ago I did play Chariot for a couple of days.

As the story goes, the ugly heroes (co-op possible) receive a powerful self-propelled chariot and embark on the mission to rescue the girl. On the verge of the cute’em up subgenre, the game does boast a nice use of colors upon a fantasy setting across seven unevenly designed stages. While the backgrounds are competent, the best thing in the graphics is definitely the array of bosses, most of them being very creative, large and visually menacing. All stages are designed around them, in a strange mix of mythology and astrology that sort of helps shift the experience from the run-of-the-mill feeling that hovers over the whole package. Since most people don’t even know that a genuine shooter is hidden in Wonder 3, it doesn’t help that Chariot doesn’t offer too much to attract the average gamer’s attention. 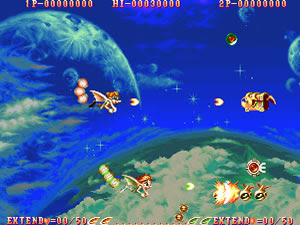 In addition to the regular shot (which doesn’t have autofire but is implemented in short bursts and favors mild tapping), the hero has a charge shot that’s activated by a separate button. The power of this charge shot is directly proportional to how many options (or tail beads as I call them) are full of energy. When the charge shot is fired the options are emptied and then slowly refilled for a new blast. Starting with only three of these, it’s possible to collect items and achieve up to seven options, thus resulting in a rather long charge tail. This tail is also useful for damaging enemies from behind and blocking incoming fire, but it also gets depleted by doing so. That’s why it’s not advisable to use the tail as a means of attack/defense when it’s empty after a charge shot has been fired.

The charge shot is dependent on the type of regular shot you currently have. There’s the spread pattern (red power-up) and the straight wave beam (green power-up), and both can be powered up four times when you stick to getting the same icon. The spread shot results in a more concentrated charge blast, while the wave beam (named as “rapid shot” in the game) yields a twisted energy discharge that hits a broader vertical area. Both regular weapons are equally useful, but the spread shot can be more efficient at point blank distance. Since the player is rewarded for fast kills on bosses, I did try to reach them with the spread shot whenever possible to get a better chance at a higher end of stage bonus.

The last component of the firepower is the bomb, which is dropped forwards in a Darius-like fashion and upon the second item collected causes a destructive wave to sweep the targeted surface.

In Chariot, one hit kills the player instantly. Initially there are only two lives, but extends can be obtained by collecting the heart items (big hearts = 5 points, small hearts = 1 point). A heart counter keeps track of how many hearts are left for the next extend, starting with 50, then 70 and finally 90 hearts. I never managed to get the third extend (90), but at least the heart counter is converted into points when the game is beaten. You can also see the 1-hit shield as a kind of extra life – this shield appears once in the stage on the 1st, 4th, 6th and 7th levels, and grants the hero with a dragon-shaped chariot that he flies like a hoverbike. Getting hit will revert it back to the regular chariot. The large hitbox isn’t much of a problem, because the game is intelligent enough to not use it as another difficulty factor.

Stages 2 and 3 of Chariot, played in MAME (note: the real game is fullscreen, not widescreen)
(courtesy of YouTube user MamePlayer)

The last thing about the gameplay is scoring. It is mainly dictated by the coin item, which ranges from 100 to 4.800 points. The catch to increase its value in each level is to always collect a coin before the next one appears on the screen. Some observations:
You can’t really say there isn’t substance in Chariot’s gameplay because, well, it even has a scoring system! At the same time though, it does come with some minor annoying issues, such as a few cheap deaths that will require strict memorization and the color of the option item, which is practically the same as the enemy bullets and can confuse the player for a while. After you get a hold of how the game works, greed for coins becomes the main cause of failure, and can turn an otherwise easy game into an unexpected angering experience.

Here’s my 1CC high score for Chariot on NORMAL: 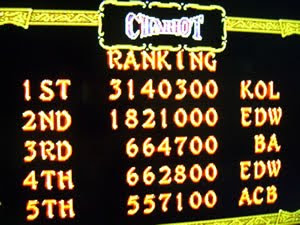