Let's rewind time back to 1984, when shoot'em ups were still in the process of establishing an image as a proper genre. It was a golden era for developers that were starting to build a name in the arcades, such as Taito, Konami, Namco and a few others. In the case of Jaleco, Formation Z was its second contribution to the genre (the first one was the vertical inertia-based Exerion), a primitive and odd title that tried to make some ideas work in a time where the genre's foundations weren't yet etched in stone. It's probably the first of all shooters involving transformations from robots to jets, a very specific variation whose most famous representative is the Macross game series.

We must bear in mind that Gradius, probably the most influential horizontal shmup of all time, wasn't even out when Formation Z hit the arcade scene (outside of Japan it was known as Aeroboto), so don't expect the gameplay to unfold like your regular horizontal shooter. It starts as a weird auto-scrolling platformer where the robot can only shoot forwards/diagonally and jump. He’s not allowed to turn left, but holding the jump button will turn him into a fast moving jet. Pressing the jump button again close to the ground will revert him back to the robot form, slowing down the action to its original starting pace. 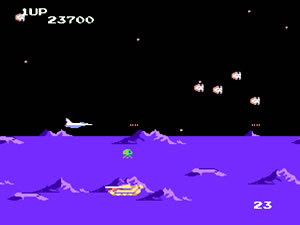 Jaleco ported the game to the Famicom themselves, and did a very good job at retaining all the characteristics of the arcade. However, saying that Formation Z’s gameplay is unique is just a soft way to say it hasn’t aged well at all. It feels clunky, cheap and unbalanced. Playing it doesn’t feel comfortable in either form (robot or jet), at least in the first half dozen tries. If you don’t persevere you most likely won’t even approach the first boss, since there’s no explicit division between stages and the second section feels just like the first one.

One of the strongest early influences in the genre is the notion of fuel, and the fact that you need to burn it in order to fly. In this game you don’t burn fuel when you remain in robot form, but flying will deplete fuel stock pretty fast (display is in the lower right corner). Therefore, in order to keep flying you need to collect fuel canisters on ground level. The problem is that doing this in jet form is very difficult because by the time you see a fuel canister it’s just too late to collect it. It’s perfectly okay to relinquish the jet form completely, but there comes a point where you must fly to cross the ocean. By then you should have a decent amount of fuel because there are no fuel recharges in these ocean sections. This means that if you don’t have enough fuel to make the crossing the jet will plummet to death.

Despite fuel concerns, it’s also necessary to cope with a few other issues. When moving up or down, the jet shoots diagonally instead of shooting forwards. The closest you are to the ground the fastest you fly, but it’s pretty easy to touch the surface and die. There are no power-ups in the game, only a charge shot that fires automatically: keep the button pressed and it will fire stronger shots at regular intervals. This demands some timing, for example, if you want to take down tanks and bosses. By the way, you can only kill these enemies with charge shots.

I like to think of Formation Z as a three-stage game. Each stage ends with an ocean or an open space section where you’re not allowed to remain in robot form. The second and third stages have bosses, and the last one of them bears a striking resemblance to Big Core from Gradius (!). After he’s defeated the game loops, revealing its surprisingly short length. Just to have an idea, it requires less than five minutes to complete if you go for a speed-run. This weird stage structure is shared by very few other shmups, such as Transbot/Nuclear Creature for the Sega Master System.

Small enemies, missiles, tanks and weird flying objects compose the limited enemy gallery. Although simple to the point of dullness, the graphics in Formation Z at least have a few layers of parallax, which adds greatly to the sense of movement. There’s no music at all, only a poor selection of sound effects. In addition to that, strange gameplay quirks do not help in making this obscure oddity any more likeable, so it’s safe to say its appeal resides totally in the ranks of nostalgia-buffs.

I spent one night with it and looped it once. I guess that’s enough for me. 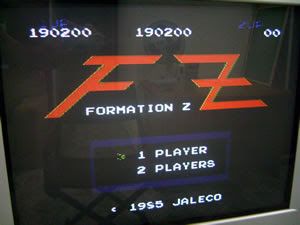