The people from Darius emigrated to a new planet, but evil forces from Belser’s space marine army track them down and start annihilating everything, including a fleet of Silver Hawk spaceships. Having high hopes, Proco and Tiat Young once again board their Silver Hawks to fight the bad guys. If it depends on the player, the heroes will need much more than hope if they want to achieve their goal in Darius Gaiden, a direct arcade sequel to Darius II that was ported and released for the Sega Saturn in all regions (JAP, USA, EUR) - a treat rarely seen for this particular platform.

Even though Darius II is a great game in its own right, I guess Taito adressed the concerns people stated about it by infusing Darius Gaiden with a lot more color and variety, much more intense boss fights and a tricky rank system. The game is well known for raising the bar of the classic fish-blasting series, presenting quite a different challenge from its predecessors while introducing new gameplay and scoring mechanics. The new learning curve is steeper in the beginning, something that might scare people from it, but patience and dedication ultimately pay off, unveiling a perfectly manageable shmup that doesn't require the infamous rapid fire cheat in order to be beaten. What amazes me is that this widespread cheat is accepted as "normal" among shmuppers everywhere, but the truth is that it corrupts the experience by making the game a lot easier. Needless to say, I refused to cope with it and played Darius Gaiden with the default autofire. 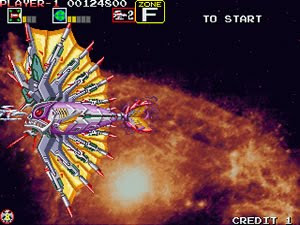 Are you threatening me? I am the big Cornh... ahm... red Silver Hawk!

Going back to the roots established when the series started, weapons in Darius Gaiden are upgraded by taking colored icons that resemble badges. These appear from certain defeated enemies and power up the main weapon (red), missiles (green) and shield (blue). Dying won’t strip you down to a default ship: you lose only two levels for the main weapon, while missiles and shield are reset to the latest base power level, which are shown below the score display. Both main weapon and missiles are fired by the same button (at last!), with the second button activating the so called “black hole bomb”, a powerful blast that sucks all enemies and bullets and explodes in a lightning burst afterwards, making the ship invincible while it lasts. Extra bombs are obtained by taking purple badges, and other extra badges appear when you shoot a specific part of the scenery, including bonus points (black/grey) and a screen wipeout (orange).

Upgrading weapons is a cool thing to do (wait till you get two great options that shoot mild homing arches!), but caution should be taken because of rank. Enemies get more aggressive and resilient the faster you power up, and can become a pain very early in the game. In order to keep things manageable you should avoid grabbing some icons - my strategy is to let a red badge go by in the 1st stage and a green one pass in the 3rd stage, which leads to less demanding fights against Golden Ogre (A) and Folding Fan (D). And let's not forget about the capture move you're allowed to do on mid-bosses, also known as "captains". Each captain has an orb on his body, and by hitting it without killing him you're able to detach the orb. Once detached, get it and the evil creature will fight by your side for a little while!

Capturing mid-bosses also plays a big part when you play for score. Each captured captain is worth 200.000 points upon game completion, adding to the overall bonus comprised of remaining lives (1 million each) and remaining bombs (300.000 each). Therefore, aiming for a 1-life clear and maximum bomb stock (5) is the only way to get bigger points, aside from killing all enemy waves during the stages and milking destructible parts on bosses (you still have to beware of the time-out rotating cubes, even though they take much longer to appear in this chapter). As expected, some levels are easier than others, as well as bosses. My nemesis here was certainly Neon Light Illusion (stages H and J). He spews so many bullets that I'm always forced to bomb his initial form, and his yellow seeking lasers always find a way to touch my precious silver glowing shield...

Don't trust what you see in the attract mode of the Saturn port, it shows the computer using the rapid fire cheat! Even though it's a considerably tough shooter, as I mentioned above Darius Gaiden is perfectly playable without it. It takes just the same amount of practice you would spend on any tough shmup, and even though you don't get extends based on score, hidden 1UPs can be uncovered by hitting certain spots in the terrain (every path has 2 of these hidden lives). Precious hint useful for cluttered situations and bosses: for a faster rate of fire, tap buttons A and C and you'll get something close to the rapid fire cheat.

I really dig the graphical design in Darius Gaiden. It's full of color and variety throughout, with some beautiful effects and parallax in the backgrounds. If you've already played Metal Black, which at one point in time was supposed to be Darius III, you'll notice that Gaiden builds upon some of the ideas originated in that game, such as boss explosions and a few of the revolving background effects. All bosses are a visual delight, they're all huge and fear inducing, and are always ready to give you a good fight. Even Golden Ogre, the easiest one of them, is quite capable to take you off-guard and hit your pretty green shield if you're not paying attention. Bosses are also the only creatures that cause very mild slowdowns, and the only other instance where you see this happen is when you trigger a black hole bomb.

Darius Gaiden's soundtrack is remarkable for its weirdness, but no matter how you see it it tends to grow on you since the best tunes appear later in the game. There's a certain cheapness in the sound effect department, but just like the music it gets better as you power up the ship and turn your main weapon into a wave cannon.

My chosen path in this port was ABDHLQV. In the high score below (NORMAL) I lost no lives and beat the game with maximum bomb stock, having captured 4 of the 6 captains. When I get the chance to play the other ports available for the Playstation and the Playstation 2 I will certainly try new paths. :) 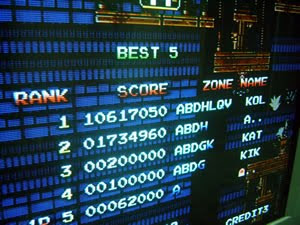