Aliens are one of the most insistent brats of the universe, they're always trying to invade and conquer the Earth. If it weren't for the brave efforts of leagues and leagues of lonesome pilots the human race would be dead meat in no time. In the case of Avenger, lots of damage are inflicted by these outer space creatures before someone takes on the task of fighting them, as shown in the game's lengthy introduction. The pilot of the advanced hero helicopter is a red-haired heroine, and the battle is to be fought throughout eight stages of alien infested tanks, vessels and warships. That's a nice way to put it, I guess, but expectations shouldn't be held high because this is a fairly average shooter that does nothing to stand out from the flock.

In certain ways Avenger reminded me of the dreadful D-Force, even though it is relatively much more playable and enjoyable. You can see similarities in the way a few weapons and missiles are dealt with between both titles. Nonetheless, I believe the most vivid influence in Avenger comes from Taito's rather obscure Gyrodine, because it uses the same tilting mechanic for weapons: as you sweep left and right your shot "bends" in order to follow your movement. The catch here is that you can lock the shooting direction as you wish. You will also be able to choose three types of weapons before playing a stage/mission. Starting out with just a few weapon options, new ones are unlocked as you progressively beat the stages - much like in Axelay. 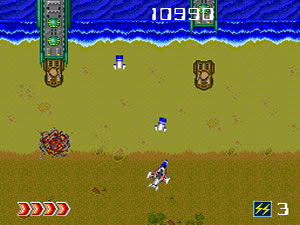 Where am I shooting at?

Flying through land, sea, cities and ravines, the avenging chopper doesn't go through anything that's graphically remarkable or mind-blowing. There's a stage where you fight a huge tank travelling at high speed, but aside from that the pace is mild and relaxing (or boring, depending on your state of mind). Overall, graphics are quite primitive and can get confusing with certain obstacles that kill you instantly. This means that hitting a wall leads to an instant GAME OVER, regardless of current energy/lives, so the error margin for this gameplay threat is null. Just like in a few other PC Engine games, the sound effects are too loud and don't allow you to listen to most of the music properly. Breathing sections are very few and far between, and without knowing them in advance you won't want to take your finger off the trigger just to enjoy the soundtrack...

In every stage the player starts with 4 lives in an energy bar. Items are carried by a specific destructible enemy and cycle through M (main weapon upgrade), S (sub weapon upgrade) and R (1-life/health recovery). Every new main/sub weapon you select needs to be powered-up, and some of them take more items than others to reach maximum power. For the main weapon you can have the default straight shot, a missile launcher and a laser. Sub shot can be chosen between homing missiles, directional wave shots and auxiliary pods. Both main/sub weapons are fired with button II, and the shot direction can be locked by continuously pressing button I. In order to trigger one load of the special weapon you need to stop shooting and push solely button I (weird, but that's the way it is). Selectable special weapons consist of 3 EMP discharges that eliminate on-screen bullets, a single invincibility device that lasts a few seconds and two smart bombs with great destructive power.With the exception of the laser, the process of upgrading main weapons is odd because as you reach maximum power the spread range is increased but the rate of fire is reduced. Having them with intermediate power and a greater rate of fire is sometimes the best option from a gameplay standpoint, but then you won't get the 3.000 points for each additional item you collect when you're maxed out.

When a boss is defeated you're treated with a screen showing the helicopter fleeing from a massive explosion, followed by a briefing on the next mission and, sometimes, a choice between two options. Unfortunately, everything is in Japanese and it was impossible for me to figure out what was going on. The selection you make affects the order of the upcoming stages, as well as the order of the newly unlocked weapons, but in the end you'll always play the same cluttered, claustrophobic last stage (be careful with walls!).

Avenger has a rather tame bullet count, with just a few moments where dodging becomes intense, such as the final section of the aforementioned huge tank stage. The best way to take down some of the stronger enemies is to point blank them, but you have to do it carefully. It's pretty common to lose all lives and waste the credit during a concentration gap (thankfully CONTINUES are unlimited, albeit forced). Upon completion, the game gives you the following secret code: URDL2ULDR1. When input in the opening screen, this command sequence (↑ → ↓ ← button II ↑ ← ↓ → button I) lets you start the game with all weapons already available. A curiosity: pressing SELECT on the opening screen triggers a short sequence starring a blonde character from an RPG series released by Telenet Japan.

One detail that bugs me involves the high score display that's shown during the GAME OVER screen: don't rely on it to get the high score after beating the game. The damn thing shows only the high score for your current session if you continue, so remember to pause right after the last boss goes down. That's how I got the following still for my records: 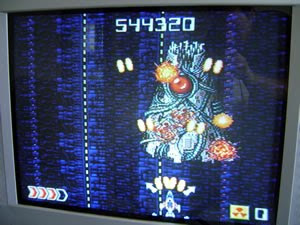