When you think that fixed vertical shooters are dead or restricted to the likes of Space Invaders or Space Invaders wannabes, there comes one game that recycles the formula and rises above the rest. This game is Crossfire, an addictive indie title that hooks you once you start playing it. I don't know much about radiangames, but judging from Crossfire and the overall ratings for their games you can rest assured you'll have guaranteed fun when downloading them. For a few nights I lost track of time while playing this, having to force myself to sleep after starting innocently with thoughts like "let me just have a quick play to relax before going to bed". Yeah right.

Moving alongside a fixed axis has made tons of people happy throughout years of arcade shooting, but what if you could actually teleport behind those pixelly aliens and give them some serious backdoor beating? Well, in Crossfire you can do it. This is actually the game's main addition to the classic Space Invaders structure, a feature that adds a whole new dimension to the gameplay. With the lush of HD graphics at hand plus smooth animations and explosions, getting cornered and warping up and down was never this much fun. Although the effects for sparks and glow are quite flashy, colors are used parsimoniously and never saturate the screen, so the experienced intensity comes from the fast action, which in conjunction with a minimalistic art design keeps things interesting and intense. It works wonders. 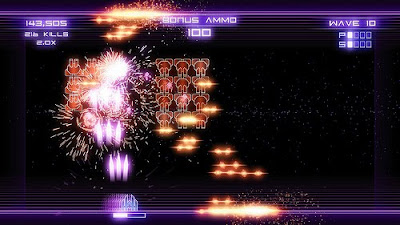 Upon starting, the first wave is pretty straightforward and has just these two lines of drones shooting directly at you. All subsequent 49 waves/stages will add new enemies, new formations and a myriad of enemy combinations that will test the player's reflexes. To deal with them you shoot (A) and warp up and down (bumpers/triggers), but you can also fire a more powerful shot (X) that uses the ammo you collect from crystals, shown in a bar right below your ship. When you warp you're invincible. It's as simple as that, the rest is up to taking the few items for power-ups (P) and speed-ups (S), memorizing a few patterns, practicing those dodging abilities when it serves a faster wave clear and staying alive as long as you can. Sure, you can just sit back and relax, but staying alive and destroying stuff fast is your only objective if you want to shoot for higher scores.

Clearing the screen faster yields a better end-of-wave bonus, and sometimes more crystals to refill the ammo for the supershot. You also earn 5.000 points for each wave you clear without dying. For every 20 enemies you kill you get an increase of ×0,1 in the score multiplier, but dying sends you back to ×1. Therefore, a balance needs to be found in how you approach the game - it's better to take more risks in the first half (faster kills) and remain progressively cautious in the second half (don't die) in order to harvest the results from a high multiplier. This is easier said than done, of course. Later in the game you have to deal with loads of exploding stuff, shield barriers and drones that shoot sideways and/or fire lasers. It's not uncommon to die by having bullets reflected in your face or by falling victim of what I like to call the "Nightcrawler" syndrome, which means you have just teleported right into a bullet on the other end of the warp tunnel.

Special enemies that sweep from side to side release two different items when destroyed: the red one refills the ammo gauge completely, and the green one slows down enemies (not bullets) for a few seconds. You start with three lives, but extends are obtained with 100, 200, 400, 800, etc. thousand points.

Once successive stages are played you're allowed to start the game in a few of the later ones, a handy feature for practicing. Extra modes are unlocked as you manage to reach certain milestones. A hard difficulty is added in the form of Turbo mode, which is the same as Normal mode, only much faster paced. Another extra game mode is the Megawave, comprised of harder enemy formations from the get-go and divided in "parts" instead of "waves".

Crossfire is extremely fun to play, even with minor details that could've used some fine tuning, such as the ammo gauge being located right below the ship. It's almost always hidden by what's happening on screen, leaving you blind as to where you are regarding supershot stock for the next wave. There isn't much variety in the techno-flavored music, but it more than fulfills its purpose of providing a good action score. I suppose everything gets pumped up a notch in the sequel, which I have yet to download and play. In any case, if you have access to XBLIG don't hesitate, get either one of them and be happy with some solid indie fixed shooting action.

Below is my completion high score on NORMAL. I wasn't able to 1-life the game, in one of the last waves I got fooled by one of those yellow saucers... The tricky bastard made me teleport right into one of those diagonal red shots! 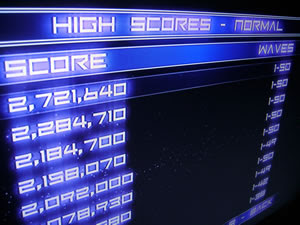