After a confined debut in the MSX scene (much later ported to the PSP), Konami's parody series on everything Gradius reaches its second chapter in Parodius Da!, released originally in the arcades and soon ported to all major home video game consoles of its time. All of the "inferior" ports (NES, PC Engine and SNES) have something unique to them, but the original adventure in its full graphical/aural glory is to be experienced only in one of the Parodius Deluxe Pack compilations for the Playstation or the Saturn (Parodius Portable for the PSP is a valid handheld alternative though). The 32-bit packs also include Gokujou Parodius, the third game in the series, and is definitely a must-buy for any shmup fan. EDIT OCT-2014: This port of Parodius Da! is considerably easier than the arcade version, even though it's spot-on on graphics and sound.

These last weeks I've been doing some very relaxed runs on Parodius Da! on the Playstation. Whereas the first Parodius played like Gradius but consisted of an all-original design, this second game parodies Gradius and its spinoffs to their core. This is made evident by the opening screen, which shows a flock of penguins glaring at the evolution of the series, and by several aspects which will be immediately recognized by those who played Gradius, Gradius II, Gradius III and Salamander. A huge exotic dancer resembles the dreaded mechanical spider of Gradius II, and the "uncle Sam" bird mocks the Phoenix boss from the same game. Viva Core is a lively pinball boss version of Big Core from Gradius, which is also parodied with new volcano and fortress stages. Moai statues populate a huge battleship, in a clear homage to Irem's R-Type. Fairies fly inside bubbles that seem to come out directly from Gradius III. The game even revisits the original Parodius with the boss made of multiple mouths and the cemetery stage. 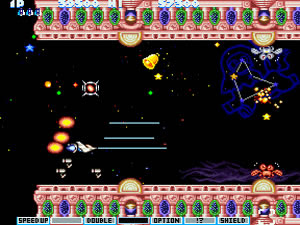 Vic Viper to the rescue

With the new processing power of the arcade board, the nonsense is heightened and takes over in every tiny detail of the game. Parodius Da! is a real delight and a blast to play, not only because it's funny but also because it's a tad easier than its more serious siblings - at least until you reach the ice caves of the ninth level. Vic Viper is back and its weapons are just like in the classic Gradius. Twinbee's behavior resembles the game it comes from, weapons for Pentaro the Penguin are close to one of the configurations found in Gradius III and Takosuke the Octopus uses the famous ripple laser originally presented in Salamander. Choose one of the four and power-up wisely in manual mode, never mind the auto power-up option you're given when starting the game. Collect power-up icons and activate them according to the weapon array gauge, collect bells for special powers and points (yellow ones) and get on board for ten stages of pure cute'em up action.

What's interesting about the series from this chapter on is how differently the game plays depending on the character you choose. If you pay close attention, right at the start you notice that each character has its own music during the pre-stage (that brief part before the main level where you destroy small enemies to get power-up capsules). Some sections are made easier or harder depending on the character because their weapons differ considerably. Vic Viper's double shot is excellent to take down enemies in the ceiling, Twinbee isn't good for the destructibe cells of the 3rd stage, and Takosuke's tail gun is perfect to deal with those bubbles of the 8th stage. My character of choice was Takosuke, mainly because I have beaten other versions of the game with Pentaro and Vic Viper.

Dealing with bells is quite fun, but in the long run you'll want to get them all yellow to boost the score. If you don't let any of them fall to the left eventually each yellow bell will be worth 10.000 points. EDIT JAN-2015: Both PS1 and Saturn ports have a serious scoring bug regarding yellow bells (the 10.000 tag actually corresponds to 25.600 points, for example). Of all other bell colors my favorite is green because it gives you a brief window of invincibility as your character gets zoomed in. However, acquiring any bell that's not yellow immediately deactivates the shield. The "roulette" effect caused by specific power-up capsules is back, making the weapon array go crazy and demanding perfect timing to activate the next power-up. When you get good at doing it it's a great way to power-up faster, just be careful not to activate the !? cell, which removes all your power and speed.

Just like in Gradius, rank plays an important part in Parodius Da!, even though it's not as aggressive. It's directly related to how powered up you are, and materializes through more enemies and more bullets. In my opinion the game is quite manageable even with maximum rank. Every stage has a particular structure and some of them seem easier than others, but I can handle the game well with only one speed-up until that water section inside the ice cave. Besides increasing enemy and bullet count, the second loop also adds one suicide bullet for each enemy you kill, and demands a lot more from the player's dodging skills. The only extends come very early in the game, with 20.000 and 80.000 points.

As I was searching for a video to embed in this post I stumbled across a secret stage that's accessed in the beginning of the second level. To do it you have to destroy the first row of enemies in the pre-stage and kill only the first enemy on the next row of enemies. I didn't try it myself, but it's great to know that this port also has its own special touch, which is in line with all other ports provided by Konami. From what I've briefly seen, the Saturn port is exactly like the Playstation's, so the fun factor is guaranteed in both collections.

I managed to reach stage 2-2, playing with Takosuke the Octopus (difficulty 4 - MEDIUM). 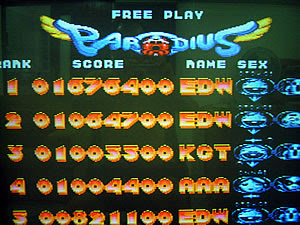 P.S. Allow me to express a particular appreciation for the GAME OVER theme in Parodius Da!, simply because it's one of the greatest GAME OVER songs ever composed. It pumps me up and really makes me want to try the game again!
Posted by Edward at 11:30 PM