32 women were murdered in Tokyo, all of the assassinations apparently linked to demonic reasons. I'm pretty sure this is further clarified in the various in-game Japanese dialogue sections and shooting action of Shikigami No Shiro, Alfa System's debut of its most cherished franchise for us shmuppers. I like to see this game as a representative of one of the three big branches in the evolution of danmaku: the "bullet grazing" shmup (Psyvariar also included). The other big ones would be the "bullet reflect/absorb" (Giga Wing, Radirgy) and the "enemy chaining" shmups (DoDonPachi). Sure there are many other branches/combinations, but whenever you think about bullet hell with the most recognizable scoring systems these are the kinds of games that come immediately to my mind, hence the association.

I generally don't care about the story, but there seems to be so much care built into it that I feel a little disappointed for understanding bollocks of Japanese. My copy is the Japanese one, since I refused to go after the localization with atrocious cover art and the title of Mobile Light Force 2. It was released in the US and in Europe, but I heard that it's a butchered port with missing artwork, lots of Engrish and no TATE option, so obviously the Japanese disc is the right way to enjoy the game to the fullest. Those who value extras will also have access in this version to an art gallery (unlocked by beating the game) and a special option with lots of Japanese text called "side story".

[ Just for the record, a first Mobile Light Force exists for the US Playstation and corresponds to the first Gunbird ]

Character design is strong in Shikigami No Shiro, and each of the six available characters is very different from the next one. Playing with all of them requires completely different strategies, so choosing the one that suits your style is mandatory to start the journey. They all share the same basic inputs, which are the main shot (tap fire button) and the shikigami/concentrated shot (hold fire button), for which your moving speed is drastically reduced. Besides that, bombs provide the necessary panic function for tight situations. The results of these inputs are completely different for each character. 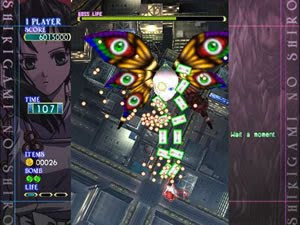 No, this is not Mothra!

I don't really like the fact that you can't control the behavior of Kohtaro Kuga's familiar, which homes on enemies when he uses his shikigami attack. He's the protagonist of the story, and probably the easiest character to play with. Sayo Yuuki is nice, she reminds me of Sengoku Ace's Koyori without the voluptuous cleavage. After comparing all of them I decided to stick to Gennojo Hyuga, apparently the most mature of the bunch. His shikigami attack is a set of three awesome energy balls that latch onto enemies, in a connection that's broken only if (1) the enemy is destroyed, (2) the enemy leaves the screen, (3) you let go of the button or (4) you get hit. His bomb is probably his weakest asset, where he'll turn into a wolf and howl as he blazes across multiple on-screen targets.

Shikigami No Shiro takes place over cities and abstract sceneries, and the complete absence of ground targets leads to a detachment between action and backgrounds that was a bit off-putting for me when I first started playing the game. Here all entities have the ability to fly, and to fly only. Bullets are in most part slow but come in overwhelming numbers, and in later stages they force you to weave your way out of seemingly impossible curtains of death. Lots of bullets are good in Shikigami No Shiro, because then you can easily achieve higher multipliers and increase your score accordingly. The core aspect is the tension bonus system (aka TBS), a gimmick that applies multipliers from ×2 to ×8 to whatever you kill, based on how close you are to a bullet or an enemy. Additionally, grazing bullets will add an awesome boost to your firepower, also leading to more items/coins left by enemies if you're using the shikigami attack.

Coins are automatically sucked into the character while using the shikigami, and their values are increased the more you collect them. Collecting coins is also the only way to power-up the shikigami attack, which goes through four levels until it maxes out. If you get hit you lose exactly 360 coins and one power level, being deprived of the increased number of coins you would collect if you were at a higher power level. The main point is that you must be as close as you can to the danger in order to maximize the score. This is probably the most extreme risk-reward mechanic in bullet hell shooters, and an obvious hint to how hard they can get if you try to score well. Damn, Shikigami No Shiro is already a tough game even if you don't give a shit about the TBS!

Another important aspect of the gameplay is time. Each stage is divided into three sections, and each one has a boss that must be defeated. Though tempting, you just can't milk some bosses forever. If the timer runs out, red indestructible demons of death will materialize and quickly clutter the screen. The game starts with 150 seconds, and for every section you complete you get an additional of 70 seconds. Upon completion of a stage section, bonus points are awarded based on time, items collected and tension average. For me it's clearly advantageous to kill most bosses the fastest I can so that it's possible to get more points from other bosses (5-1 is the best example) without having to deal with the timeout demons in the final sections. Most of the time you don't worry about the timer, it only gets critical when you're about to clear the game, after lots and lots of practicing sessions in the tough parts.

The game allows you to get extends, but the maximum number of lives you can have at any given time is three. Therefore, you won't get a new life if you reach the extend points with a full life stock (extends are granted with 150 million and every 300 million afterwards). A frustrating moment is when you just went pass the 150 million mark and get hit, losing a precious life you just missed for "scoring too much"... Two extra bombs are quickly obtained by powering up at the beginning of the game, with new bombs granted only if you get hit or if you reach the extend milestones.

When played for score Shikigami No Shiro can be turned into an exercise in frustration, beyond what's already offered by the increasingly harder stages and bosses. However, it's refreshing to know that every new section you reach without continuing is unlocked for training in Practice mode. It's a character-based unlock, but still a great way to allow improvement without incurring in grinding. I enjoyed the difficulty progression and the fact that there are always safer ways to go through the mayhem of enemies and bullets. Finding these paths and surviving the odds while grazing bullets is quite a rush. I just think the designs in stages 4 and 5 are graphically lacking, especially when compared to the starting skyscrappers of Tokyo at night. At least bosses remain interesting throughout the whole game, firing all sorts of bullets, lasers, energy beams, fireballs and needle shots in widely varied and intricate patterns. And let's not forget about one of the craziest mixes I've ever seen for regular enemies: teddy bears, butterflies, ballerinas, ninjas, leaves, drums, statues, skulls, etc. The voices in the game are subtle yet effective, but sadly there's nothing spectacular about the music. Nevertheless, one tune I did enjoy is the BGM for the second stage. It's impossible not to tap my feet to its rhythm when I'm waiting for boss 2-2 to arrive.

My 1CC run with Hyuga was done on NORMAL (difficulty 3), with "wait" set to OFF. This wait option is supposed to replicate the original slowdown of the arcade, and having it in OFF completely excludes all slowdown from the game. I could've tried to play more aggressively to increase my score, but I was too lazy. Let's say I'm saving my bullet grazing drive for the sequel! 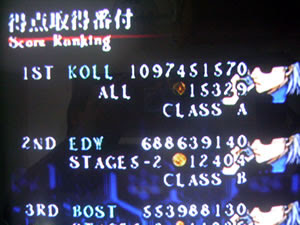