The introduction to Burning Angels shows one of the “angels” – girls who pilot spaceships – being kidnapped by nasty evildoers. I wonder if there was supposed to be some inspirational connection with Charlie’s Angels, since the two remaining girls responsible for rescueing the kidnapped one always appear in sexy outfits while controlling their respective ships, kinda like what you’d expect from an edgy serial starred by strong female leads. The “burning” part of the title certainly refers to the special weapons these girls are able to deploy, so brace up for a fast, reflex-driven vertical shooter as you choose one of them to rescue your colleague.

Despite its strong run-of-the-mill nature, Burning Angels tries to be a little different by having two screen modes to choose from. Not only can you play the game in full screen resolution, but you can also shrink it horizontally in order to emulate an arcadey feel on your TV set. I didn’t like this mode at all, it seemed unnatural with everything looking horribly compressed. A real TATE mode would’ve been better, but I guess it was too much to ask from a console game back in 1990. Co-op play was a much more feasible asset, and if you like to shmup with a friend then this one is yet another choice for some serious shooting cooperation. 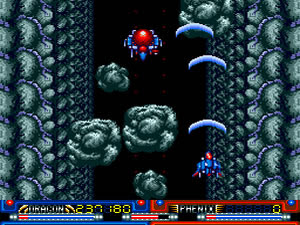 3rd stage stones cannot be destroyed, only slowed down


When playing solo, you can choose one of the two heroines who pilot two different spaceships: the Dragon and the "Phenix". Both travel at the same speed but have a very distinct arsenal. The Dragon ship is equipped with a wave shot as its main weapon, with fixed pods and long-range missiles. The "Phenix" ship shoots what seems to be bubbles, has rotating pods and short-range exploding missiles. All icons are released by a pink carrier: P increases the ship's power, B activates the auxiliary pods, M activates the missiles and L refills a bit of the health meter. After a while stars start appearing: collect them in order to fill the "burning" bar located between both ship's huds. If this bar is at the blue level, press combinations of buttons I or II with SELECT and watch as both ships merge in order to unleash a devastating attack. Button I + SELECT will turn the ship's firepower into a deadly laser beam, while button II + SELECT will render the ship invincible as it assumes the form of a flaming phoenix. Pressing SELECT without combining it with any of the buttons has no results whatsoever.

Every time you get hit you lose a little health and part of your firepower is reduced. First you lose the missiles, then the pods and then one power-up level until you get back to the default shot (it takes two Ps to max out the main weapon). Pods are capable of inflicting damage and absorbing bullets, and represent the best defense against some enemies who shoot only when they get very close to the bottom of the screen. It was pretty clear to me after just a few tries that the Dragon ship is better than the "Phenix", whose only advantage is a more powerful missile attack. There's no problem if you're able to keep all power-ups with the "Phenix", but once you start getting hit and you lose power it's really tough to keep up with the enemy waves. The rotating pods are also very unreliable when trying to block incoming bullets.

One of the trademarks in Burning Angels is how aggressive the initial bosses are. Their attacks are blazing fast and practically demand that you activate the burning attack if you want to get past them unharmed. Getting rammed by them also takes away a much larger chunk of health. A good strategy is to activate the burning attack before their nastier moves, knowing that the burning power is used only when you actually press the fire button. The third boss, for instance, can be defeated really fast before he does his initial clockwise arc if you use the burning laser for a brief while. In all cases, burning energy must be properly managed because it's not easy to refill the bar up to the blue level once you deplete it completely.

It's safe to assume people will recognize qualities in this game, such as the frantic pace of most stages, a few nice BGMs here and there (despite the weak audio) and a humble albeit decent character design - our ladies meet and talk in between stages; one of them pilots the ship in a hoverbike fashion, the other sits back in the cockpit. Graphics are okay for the rather generic sci-fi motif, with some occasional layers of parallax and mid-bosses to spice up the action.

The only real issues I see in the game are the excess of enemies coming from the bottom of the screen from stage 3 onwards, the cumbersome way of deploying the burning attack (regular button with choice through SELECT would be much better), the lack of a high score buffer and the highly unstable scoring system. Example: sometimes you get out of the first stage with 120.000 points, but most of the time you'll only get 90.000 points, perhaps even less. At first I thought it was related to speed kills, but it doesn't seem to be the case, and destructible parts are not to be seen. I just can't figure out what influences what. Another prime example is the large ship that appears at the very beginning of the game: watch the score counter and try to get 10.000 points. In my case, 9 out of 10 times I only scored 5.000.

Burning Angels has no CONTINUES, but the game is on the short side and gives a decent challenge. The difficulty spike in stage 3 might incur in a mild frustration factor, and the best way to deal with it is to master the burning attack. Once you do it health isn't much of a problem because there are plenty of L items to help you go the distance. And the strangest thing of all: bosses become easier as the game reaches the end. My 1CC high score was achieved with Dragon on NORMAL, with regular (wide) screen resolution. 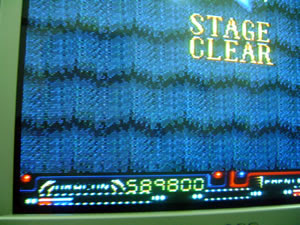