I have absolutely no idea how rare this game is, but judging from the scarce information available online I assume it's quite an underground oddity. There seems to be a shady connection with Taiwanese company Gamtec (from Magic Girl and Adventurous Boy fame), but this is mostly associated with the Famicom Thunderbolt II, which is completely distinct from its Mega Drive counterpart. In the case of the Mega Drive, Super Chip is the name printed on the cartridge, while Sun Green shows up at the start screen, with no evident signs of Gamtec on it. EDIT 2011-10-12 a trustful source told me it's indeed Gamtec behind Sun Green :) Don't ask me about a first Thunderbolt, it's an unsolved mystery as far as I know of.

Often disregarded by some as official games, unlicensed material such as these are a delight for the collector, and I couldn't resist the urge of playing it right away once I got it. My initial impressions were good for a change, since the standards on unlicensed Mega Drive shmups are rather low. Scrolling was surprisingly smooth, visuals weren't a total waste and the overall feel reminded me of Dangerous Seed and Verytex. Sure these impressions were properly put to the test, and a couple of days later I had already beaten the game. 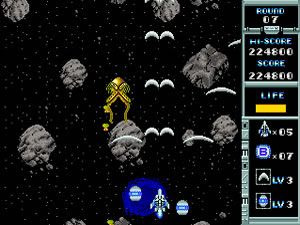 Every stage starts with a glimpse of the upcoming boss and a one-line cryptic message about it. Default speed is very slow, but the first couple of enemies you kill will immediately drop speed-up items (S). You can't tell from where the remainder of the power-ups will appear, but once they do they will all come down the screen in short staggering movements. The power-up (P) provides three different weapons according to its cycling colors: green (default) is the straightforward shot, blue is a Star Soldier-like pattern and gray gives you a wave weapon. After the third consecutive color collected the weapon reaches its maximum power, and the best thing about it is that all weapons are equally useful. I did have a preference for the wave shot nonetheless.

Additional weapons are acquired by taking the extra icons M and H. M activates two blue energy balls that chase enemies around the screen; they start out pretty slow, but become quite effective when maxed out. H activates a pair of rotating orbs that absorb enemy bullets, whose speed increases the more you power it up. Lastly, the yellow power-up provides extra bombs. These bombs have a mildly delayed screen-clearing ability, meaning you've got to be careful with nearby bullets once a bomb is used or you might get hit and lose some energy.

Thunderbolt II doesn't offer too much in the way of challenge thanks to the health bar. You only die if this health bar is depleted, and the constant supply of energy recovery items (heart-shaped icons) certainly help the player even more. There's no limit to the amount of bombs you can stock, and on top of that you get an extra life for every 60.000 points. The game only starts to offer some real resistance in the last couple of stages, with a few bigger enemies with erratic behavior and bosses that require a bit more focus to be killed. Every surplus power-up collected is worth 1.000 points, so keeping the same weapons without getting hit throughout the whole game will certainly lead to a higher score (when you're hit twice in a row the weapons start powering down).

Unfortunately, while the weapon system is well thought out and effective, the game lacks in graphical design and enemy variety. Scrolling is smooth and there are a couple of parallax-heavy stages, but the bulk of the backgrounds is undoubtedly uninspired. A good thing is that slowdown is minimum and negligible. In the 5th level the music starts repeating itself, and even though it's not grating in any way it's just not capable of providing any extra motivation for those who crave good music while blasting everything.

Besides all the shortcomings and a considerable "meh" flavor, Thunderbolt II manages to be the most balanced of all unlicensed Mega Drive shmups I know. Although influenced by licensed material, it avoids ripping them off blatantly (with the glaring exception of the DNA lizards from Darwin 4081) and at least gets it right on the genre basics. Be warned though that it won't work properly on a Sega Genesis + 32X setup (graphical/gameplay glitches). I had to dust off my old Japanese console to play it.

My final score for the game is shown below (NORMAL), taken right after I killed the last boss. There is a hi-score indication, but it doesn't work and the score that should be preserved disappears after the credit is over. 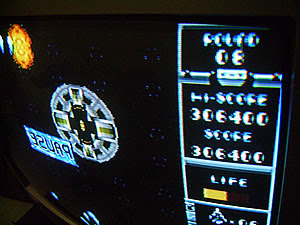 Note: this text was cross-posted with minor changes on Sega-16.
Posted by Edward at 12:10 AM