Developer Asmik never had any strong presence in the gaming world so to speak, let alone in the shmup realm. During the 16-bit era the company delivered one shmup to each of the main video game consoles, and considering the SNES received D-Force I guess we can all declare the Mega Drive the clear winner in this particular case. Granted, at the end of the day Verytex isn't anything special but it certainly trumps D-Force in all aspects except for difficulty, even with the cruel checkpoint system that makes you restart the stage from scratch every time you die. Oh yes, don't even think of biting the dust on bosses. Unless you want to exploit checkpoints for score, of course.

Almost everything about Verytex is as generic as it gets. Take graphics and gameplay, for instance. Although benefiting from good parallax, graphics are 90% tiled and cheaply designed. The sense of speed that comes with the overall faster scrolling helps disguise that, but when the gameplay allows you to cruise across the stages with very little effort due to the overpowered weapons you can't help but feel like you're playing a caravan game. That must have probably been the reason for the single checkpoints, otherwise Verytex would've been even easier. So buckle up for a relaxed ride and crank up the volume, after all this game definitely has one of the best soundtracks of its generation. 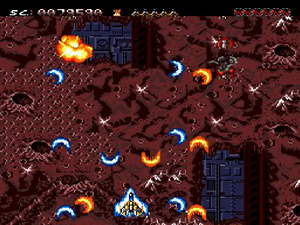 Controls are simple and effective: shoot with A, bomb with B and select flying speed with C. The starting weapon can be changed or upgraded by taking the colored icons that appear from destroyed little carriers. Yellow upgrades the default vulcan shot, which when maxed out fires three spread streams at the front and two at the rear. Blue creates a forward shot that maxes out to four staggering arches that cover a wide area on each side of the ship. Finally, red enables a straight thin laser that kinda resembles the blue weapon from Raiden. Besides power-up items you might also come across an M (homing missiles, take a few to max out), a B (three extra bombs) or an S (shield that protects the ship against a few hits).

Verytex has no options and no extra difficulties at all, and each credit starts with five lives in stock with no extends in sight (upon GAME OVER you can still continue from the start screen if you so wish). Contrary to most of the contemporary shooters of the time, bombs do not possess great power in this game. They're mostly good to kill cannon fodder and melt nearby bullets, and given that there's plenty of those B icons and no bonus for preserving bomb stock the conclusion is that there's no need to get stingy with them at all. Speed settings selected by button C are labeled as I, II and III, and my favorite choice for the most part was speed III. As for the shield, it will only be active until you beat the boss. The game strips you off the shield every time a new level/act starts.

Just like the gameplay itself, the scoring system here is very basic and revolves around getting every possible item (each one is worth 1.000 points) and killing all destructible projectiles fired at you. That once again opens the famous can of worms regarding milking and checkpoint exploitation, especially on the last level: die when you're about to kill the golem boss and repeat the stage to substantially inflate your score. So there remains one of the trickiest dilemmas of all checkpoint-based shooters: should we play for a 1-life victory or should we exploit checkpoints for score? My opinion is that these are two completely different kinds of challenge, and this time I decided to go with the first option.

Graphic themes in Verytex range from the classic outer space setting of the first level to the organic womb of the enemy planet in the final stage, which is full of strange innards floating above a deep ravine. In between you fly over what appears to be the surface of a moon, rush amidst the clouds above a sunken city, patrol the orbit of a blue planet and fight a large battleship over a grid-like background. Some of the mid-bosses from previous levels return in the last stage, which ends on a battle against a very creepy boss. Hint: in his last form look for a safe spot in order to survive the laser shower.

As mentioned above, the backgrounds scroll slightly faster than usual for this type of game, creating a false feeling of it being frantic (there's very mild slowdown here and there). It works at an elementary level, but soon the impression fades and all that's left to be really appreciated is the great music. There's no other way to put it: the soundtrack is just too good for the game itself. I consider the theme for the first stage one of the greatest outer space anthems ever composed for a video game.

Below is my final 1CC score on Verytex, beating the game on one life without milking bosses (remember to pause instantly as you kill the last boss or you won't be able to see your score anymore). Unfortunately in the end there's no special bonus for life or bomb stock left, but you can certainly surpass one million points by exploiting the last level. 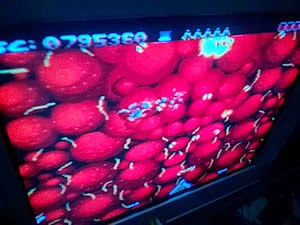