Science Ninja Team Gatchaman, or Gatchaman for short, is an anime series originally created in the late 70s and sporadically reborn over the years. Considerably obscure for most Westerners, it never achieved any success that went beyond a restricted cult fanbase. The series was created by Tatsunoko and its characters appeared in a few video games, the most recent one being the Tatsunoko Vs. Capcom - Ultimate All-Stars brawler for the Nintendo Wii. As its name implies, Gatchaman - The Shooting is a shmup rendition of the anime. I guess it comes as no surprise that it's also a Japan-exclusive title, right?

Just going by the looks it's clear that the game is reasonably faithful to the TV show, even though it came out at the end of the Playstation's life as another entry in the infamous Simple 2000 budget label. The budget side of it rears its ugly head when you notice that the game offers almost nothing noteworthy for shmuppers. It's a serious contender for easiest shmup in the Playstation library and will pretty much bore anyone who doesn’t care about the TV show or anime in general. We’re talking about pure fan service here, something that was obviously aimed at a target audience that doesn’t or shouldn’t care about challenge.

What Gatchaman does wrong as a shmup? The lack of autofire isn't much of a problem, but how about a very generous health bar that gets refilled every section you play, extremely slow enemy bullets, naive bullet patterns in boss fights, repetitive design, some inexcusable slowdown and an overall lack of challenge? 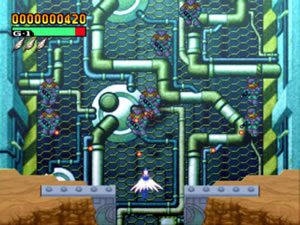 The Gatchaman team is comprised of five fighters/ninjas with a wise professor as the leader. He's the one who briefs/debriefs the missions and assigns each one of them to specific stages. The player has the option to choose any order for the four initial stages/characters. They start the level by walking and upon defeating the mid-boss they embark on powerful vehicles to take on the last waves of enemies and the stage boss. Initial sections are practically the same for all characters up until the mid-boss. The only exception is the last stage, a single level with psychedelic backgrounds where you fly the Phoenix ship piloted by Ryu "the Owl", the fifth member of the Gatchaman team. This last ship is formed by the fusion of the four previous vehicles piloted by the other characters.

On foot, Ken "the Eagle" has a thin shot with homing missiles. He pilots a spaceship with a vulcan spread pattern. While on ground Joe "the Condor" has a straight, slightly wider shot, and pilots a racing car. Jun "the Swan" has a ground weapon that resembles a yoyo and pilots a hoverbike. Jinpei "the Swallow", the youngest hero, uses a short-range weapon on foot and pilots a bomb-spreading tank. As expected, given the nature of the game there's absolutely no room for them to show their ninja skills or superhuman abilities. Dialogue interaction is done by text only, with no voice work and completely static pictures. All other graphics are shmup-oriented, and even though they lack depth and detail they're at least quite colorful. The music is probably taken directly from the show, although I can't confirm that.

During gameplay our brave ninja team will face a majority of mechanical creatures, turrets, robots and flying enemies. Medium-sized ones will release medals that work as power-ups, which max out once the fifth one is collected and afterwards are worth 5.000 points each. If you get hit you're punished by powering down one level while losing some health. There's no health recovery anywhere, but it's practically impossible to deplete that huge health bar since it gets refilled every time a new section starts. Bombs will increase firepower by adding shadows to the characters for a brief while. Stage completion bonus is based on remaining health, bomb stock and the number of hidden G items you have collected. These items appear when you hit a specific part of the scenery. Most of the time their areas glow when hit, the only instance where this won't happen is with Jun's yoyo. Beating a stage second half unharmed (100% health) will grant a special bonus of 50.000 points - the first half is mercifully disregarded on this PERFECT bonus.

Gatchaman's snoozing ability is undeniable. Probably the only places where the player will be put under pressure are Jun and Joe's mid-bosses and Jun's boss, mainly due to the amount of displacement needed against a few denser bullet clouds. However, the pressure's completely gone as soon as the next section starts. You even get free power-ups during a boss fight if you happen to get hit. The game has no difficulty adjustments but offers an option to activate a "sudden death" mode, where you die instantly at the first hit taken. As cruel as it might seem it's actually possible to conquer the game this way, it's just a matter of being more conservative and starting in the trickier levels (Jun and Joe's) to avoid the rage from late failures. I didn't have the will to try it.

When I dispatched the last boss on my first credit I still had hopes of another killer stage with a huge mechanical beast and at least a tiny increase in challenge. But alas! A short romp over only five levels and an almost absolute lack of challenge is what I got. It was fun for five minutes only. What a disappointment, if it weren't for the common first halves in 80% of the stages Gatchaman would be even shorter. Maybe it wasn't the case back in 2002, but today even fans of the TV show might be in for a letdown.

Below is the high score from the embedded video for my best run. I played the game in regular stage order and used a turbo controller. Note: there is a load/save function on the disc, but you have to do everything manually. 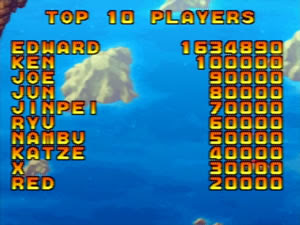