Hypership Out of Control (Xbox Live)

One of the most controversial aspects of the XBLIG platform is the complete lack of graphical demands towards developers as to how they should present their games. It's because of this that the system is plagued with appalling stuff from A to Z, but at the same time you might find interesting material such as Hypership Out of Control. It's a nostalgic throwback to the 8-bit days, where graphics were more simple yet the systems often couldn't handle the graphical stress imposed on them, hence common problems such as slowdown and sprite flicker. Of course this shouldn't happen at all if such a game is released in the consoles of today, so the pleasure of enjoying a genuine graphical homage to the 8-bit days in high definition is irresistible for those who lived that era.

Hypership Out of Control is a little vertical shooter with a "racing" heart to it. No, I'm not trying to shove another subgenre definition, it's just how some people like to refer to games where one of the main gameplay concerns is to dodge incoming obstacles. In the case of this one it's a little bit different since scrolling/ship speed cannot be arbitrarily controlled and you can certainly shoot and destroy stuff (button A). There isn't a single enemy bullet in the whole game though - danger is solely imposed by static and moving obstacles, treacherous coins that will lead you to hairy situations and a fast and smooth scrolling speed, which picks up a little more every time the game is looped. 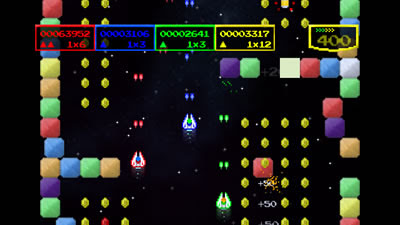 Oops! One of the four ships just died!

The idea behind Hypership Out of Control is that the brakes for the spaceship were trashed, so you will always accelerate and peak at some maximum speed. Truth be told, unless you get to later loops it's not really thaaaat fast, but you get the picture. With a general look that's reminiscent from the blocky terrains of Star Force/Soldier, stages are seamlessly connected to each other although each one of them represents an isolated challenge in memorization, best route planning and scoring. Scoring is, in fact, what takes the game to a new level and puts it above its competitors by default. Don't die and watch every collected coin add to a multiplier that will give a ×5 bonus for the base value of everything you score. Die and lose lots of points by resetting the multiplier. Every 100 coins you collect increase the multiplier by 1, so it takes 500 coins to max out at ×5. Regular coins are yellow, red and green coins are worth more points. There's also a "fun sloth" hidden somewhere in the loop, supposedly worth a lot more.

Not only the graphics are a homage to the 8-bit era, the music also resembles good old 8-bit chip tunes. If the ship (not the scrolling speed) feels a bit too fast it's probably due to the wide horizontal stretch of the HD presentation. It takes a bit of getting used to, especially when adapting to the notion of space and timing as blocks approach from the top of the screen. Even the destructible ones might get you off guard if you don't anticipate the trajectory well. Fortunately the 8-bit style gives great visibility to blocks, fired bullets and items, which are invaluable both for scoring and survival. Here they are in a short list:
Besides shooting and bombing you can also perform quick side dodges with the controller bumpers. Initially I tried to use these commands but I eventually gave up.

The game has no bosses and there's no randomness to the stages themselves, so items will always appear in the same exact place in every loop. After maxing out the multiplier a compromise must be made between greed and self-preservation, since staying alive is definitely more important than collecting coins. Hypership Out of Control is fun and it does feel good to get a long streak of points out of a single life, but beware: restartitis is right around the corner as you get the stage layouts memorized and start dying early in the game for the most stupid reasons. There are no extends at all, so it's just those four tries followed by GAME OVER. Thankfully cutting some learning corners is possible by practicing all waves separately if you want to.

Lighthearted humor is present throughout the whole game, and if you feel there's not enough color you can always activate "fun stars" at the start screen, which changes the shades of the backgrounds every two seconds and is prone to give everybody seizures. Extra game modes include Hardcore (only one life), Super Speed (no max speed limit, accelerate forever) and Coin Down (starts with 100 coins that decrease with time, the game ends only when the counter reaches zero). In every mode it's also possible to activate a Reverse switch, which makes the player fly through each wave in reverse order, and in all of these modes you can have up to four players in cooperative action.

Though not a difficult game by any means, I recommend everyone to try and reach later loops for the sheer sensation of speed you get: when the last life is gone and the game halts on that mocking laugh you might experience a brief optical illusion where the screen seems to still be moving - only then you realize how fast you were travelling! Simple, score-driven and fun. That's what every XBLIG shmup should aim for, isn't it?

Another nice aspect of Hypership Out of Control is that it saves high score stats with time stamps for all game modes. Below is my high score on the normal game, wave 28 corresponds to stage 3-8. Unfortunately I wasn't able to find the fun sloth... Where might the damn thing be? 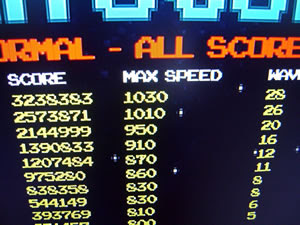 Note: there's also a sequel released for XBLIG and portable platforms that follows the exact same formula, aptly named Hypership Still Out of Control.
Posted by Edward at 10:04 PM