Time for a brief celebration on 200 blog entries for shmups I 1CCed on video game consoles. From the last hundred 88 of them were brand new 1CCs, whereas in 12 I just went for a new high score in previously 1CCed games.

A few current blog stats on the milestone reached - 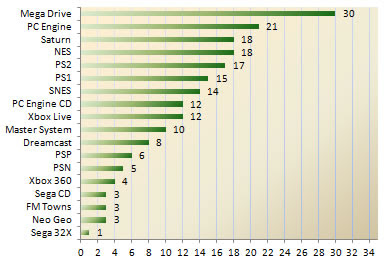 Vertical shooters are closing in, there were far less compared to horis the last time I checked the numbers...


Choosing the game
The amount of shmups available everywhere includes stuff for all tastes and skill levels. Sometimes a review or an honest opinion will tell if said game is more suited to one's liking, but I always thought it was best to try it out for myself regardless.

Establish goals
Whether it's a single level, a 1CC or a 1CC + a minimum acceptable score, goals should be defined prior to each campaign or gaming session. It helps to keep things under focus and tends to give a better sense of accomplishment. At times I play just to get better against a boss or to perfect that section that's giving me trouble.

How long to achieve the goals?
How long should someone expect to play before reaching the abovementioned goals? In my opinion the answer is closely related to time available, dedication and focus. Therefore it varies, so we should never feel under pressure to do it within a given time frame. Of course this doesn't apply to contests and such.

Gaming cycle
There are three steps/phases I always envision when I start to play a new shmup.

The first phase is game recognition: play a few credits with no other objective in mind than to grasp the basics about controls, gameplay and scoring. Some games take 5 minutes, the most complicated ones might take a couple of hours.

The second phase is the learning ladder: I play at my own pace to learn the game, how to beat bosses, how to preserve/gain lives and how to perform both safely and risky (if I'm going for a higher score). At this moment it's pretty common to establish how far I want to shoot scorewise because risk thresholds arise naturally. I believe these thresholds are different for each person, and pushing them is both the primary source of one's improvement as well as the main cause of frustration when shmupping. Beware of early burnouts.

The last phase is the final showdown. Every credit is aimed towards the definitive goal. As such, focus is the most important aspect of all. It's important to avoid distractions - I've already failed in mighty runs because I had to answer the phone, scratch my back, address someone or even take a dump. During this phase failure is a constant companion. However, even if I spend one hour in utter failure I'll consider the session successful if I manage to improve at least a bit in a certain positioning strategy, in one of the tightest bullet patterns or in a new way to amass a few more points. There's always room for improvement, and practice always leads to better performances. Nevertheless walls should be treated with respect. Beware of full throttle burnouts.

--- Common quirks ---
1. Practicing
Before emulation was born practicing and beating games used to take longer. These days you can always fire up MAME or an emulator in order to practice hard games by sections, thus saving some precious time in the whole process. There are people who are against this, but I think it's a perfectly fine resource. Credit feeding for practice is just as useful.

2. Walls
As much as I'd like to be able to crush every game I play, sometimes I just can't do it. In these cases you can search for help in superplays, exclusive hints, strategy threads in forums, etc. There's absolutely nothing wrong with that. I watched superplays to beat Radirgy, Prehistoric Isle in 1930, Layer Section and Gradius II. If it still doesn't cut it just step away for a while. Come back later with a cooler approach and better skills. This happened to me with Shienryu, Giga Wing and Air Buster. And I've yet to have second rounds with DoDonPachi and Judgement Silversword.

3. Burnouts
As you all know, it happens when walls are not respected and the player incurs in anger, (excessive) swearing and an irredeemable sense of failure, which leads to gaming feeling like work. A few times I came close to it, but I was smart enough to step back and let the game rest for a while (Robo Aleste and Strikers 1945 II).

4. Boredom
Is the game a little boring? It’s hard to tell if it’s temporary or if the game just hasn’t clicked yet, or if I’m just too tired to concentrate. So I choose two or more different games and try to play them all at once. Sometimes they even help each other in their appreciation. Besides, tough games followed by easy ones help me keep my spirits high (if I’m too tired I choose something not too taxing – any XBLIG shmup is often a perfect fit). If it’s still boring go do something else completely different. Maybe shmups aren’t for you in the end, who knows?

5. Available time
Play when you feel like, never the contrary. I usually like to spend two or three credits after lunch with the toughest game I’m playing, usually a bullet hell. It facilitates digestion and keeps me sharp for an afternoon’s work. If I have time during the evening I’ll play other games for a longer period – bullet hells will only occupy the slot if I’m in their final showdown phase.

6. Easy or hard games?
I love them all, and I have absolutely nothing against easy shmups. Do they make me a better player? Probably not, but I will always be fond of game design in whatever form it appears. Trouble Shooter and Thunder Force III are incredibly easy, but this doesn’t mean they aren’t fun. It’s the magic that drives people who love video games, is it not?
What isn’t exactly healthy, especially for those who want to get better, is sticking to easy games only. Challenging ourselves is the only way to improve, and 1CCing a shmup (or any game for that matter) we thought was impossible for our skill level gives us one of the best sensations a person can have in any video game experience.

For high level discussions on the subject you can always go to this great thread at the shmups forums. I recommend paying close attention to the links in the first post. :)
Posted by Edward at 4:21 PM