In the original Dragon Spirit for the arcades, the brave knight Amul/Amru was turned into a dragon and went on a mission to rescue a beautiful princess. However, when the game was ported to the NES Amul did not keep his protagonist role. The new warrior dragon - hence the game's subtitle - is actually his son, now fighting against a second wave of evildoers in order to bring his kidnapped sister back home. All of this is shown in a brief introduction and in the gameplay itself: you must go through a short "replay" of the battle against Zawel, the final boss of the arcade game. Beat him and you're allowed to start the actual game in Blue Dragon mode. Lose the fight and you'll play the credit in Gold Dragon mode, which is just an easier game with fewer levels and a different ending.

Regardless of the odd introduction and a few new aspects thrown into the gameplay, Dragon Spirit on the NES is a legitimate adaptation of the arcade game. Given the downscaling of graphics and music and the addition of story bits between stages, it's a decent effort and overall a fun, easygoing game to play. You still get the feeling of a great fantasy setting and recognize all the nice tunes within the simplified 8-bit renditions of the original music. If you consider the fact that this port at least kept all the original stages you could say it's actually more complete than the PC Engine version, which is a much harder adaptation by comparison. 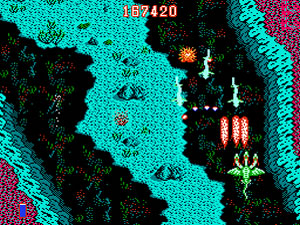 Derived and expanded from Xevious, controls in Dragon Spirit are down to only two inputs. Fire the main shot with one button and drop ground bombs with the other button. Our mighty dragon flies through all kinds of terrain and faces a handful of fiendish creatures. He’s vulnerable to enemy bullets and collisions, as well as volcano bursts, growing magical plants (jungle level), moving/stationary spikes (cave/glacier levels), obstacles such as rocks and crystals (underwater/dark levels) and spears protruding from walls (last level). At least you can lean against the castle pillars as you’re about to complete the mission in the final stage, prior to battling last boss Galda, the successor to Zawel’s empire of evil. However, just like in the original game if you arrive there with a fire-spitting dragon he will be toasted in no time, making for a very anticlimactic final battle.

The built-in firing rate is okay but isn't ideal, so a turbo controller is definitely helpful on Blue dragon mode (the Gold dragon has turbofire by default). Firing rate notwithstanding, the game isn’t hard by any means. In fact, most of the learning process has nothing to do with dodging nor dealing with the enemy gallery. The three hits you can take for each life are still there, dragon speed is reasonably fast and the hitbox is handled in a forgivable way (his wings and tail aren’t damageable). The main challenge lies in learning what each item in the extensive item collection does - there are so many that you’ll most probably end up screwing your first runs due to sheer confusion. The color palette of the NES is very limited and sprites are so tiny that most items look like each other. Collecting too many speed-ups was my first problem, but once I figured out how to distinguish them I was able to get to the end on the next credit.

A ground egg colored in orange or blue always releases a power-up and an extra dragon head, respectively. You can have up to three heads, and shot power increases until the dragon is able to spit fire. These items might also appear from blinking enemies, as well as speed-up, 3-way shot (white dragon), flame enhancer (green dragon, maximum power at once), shrinker (S), invincibility, earthquake (the screen shakes and all ground enemies are killed as soon as they appear), diamond (bonus points) and a skull (powers down everything, including firepower, number of heads and speed - the same thing that happens when you get hit). New to the NES game are the dual dragons (two mini-dragons flying by your side), power bomb (every ground bomb dropped produces the same effect of the earthquake) and a heart (extra life, replacing the dragon eggs that hatched extends in the arcade version; no score-based extends exist in this version). Extra attention must be paid to items that override each other. For example, you can't have a shrunk character with multiple heads or dual dragons.

Even though the NES port cannot compare with the arcade game in any aspect, there’s a cool exclusive section at the end of the glacier stage: a high speed scramble will make you weave through narrow corridors amongst spiky walls. The sudden change of pace works really well, and it’s a pity that we don’t get to see any more of it for the rest of the game. We do get a brand new final boss though, as hinted by the game's intro.

Besides the high speed sequence mentioned above, the invincible fireballs in the first level and a destructible net in the jungle stage, the main addition to the gameplay in this version are the imprisoned kingdom maidens/fairies, which appear after you beat the boss on the first six stages and tell a bit of the ongoing story. If you are successful in freeing them during the stage they will grant you with health recovery and extra heads/lives. If you fail you’ll only see their shadowy outlines and no survival/firepower bonus will be awarded. According to the instruction manual, to free a maiden you need to hit a specific ground area somewhere in the level. I didn’t care about trying to find these secret spots because from what I read there’s no real reward in the long run besides those survival refreshments. The ending will be the same and everybody in the reign will be happy when the dragon slays the villain for great justice.

Everything in the NES port of Dragon Spirit is just about right, as it inherits the variety of the arcade original and succesfully reworks the design into a game that does not flicker nor slows down excessively. It's a succesful job, even if the challenge gets reduced a bit too much for some. Plus it’s also neat to finally have a name for every stage. Once the game halted at the ending screen I pushed reset to get the following picture with my high score. I'm almost sure you can milk a few bosses for more points, but I didn't do it at all.