I guess ever since Konami mocked its own flagship series other developers felt it was okay to release wacky shooters upon the game audience. Some are better or funnier than others, but they’re often a good subject for geeky talks. God Panic (also known as Shijō Saikyō Gundan) is neither bombastic nor rubbish enough to polarize opinions, consisting of a lighthearted romp that allows everybody to have easy fun while marveling at a handful of bizarre visuals. Just like most shooters of its kind it never left Japan, but since it’s a CD-based game a free enjoyment pass is also guaranteed for those who own a Turbografx-CD.

Everything in God Panic is in Japanese, so I have absolutely no clue about what’s going on in the brief snippets of story we get to see. The elderly bald guy that plays the role of a Zeus-like entity seems to endow a cat-god (the player) with powers to make things right in a fantasy world filled with strange landscapes and creatures. Expect crisp graphics, vibrant colors and a fitting soundtrack that might make you giggle with pop references – in the second stage, for example, you fly over the back of a giant bikini-clad lady to the sound of a mash-up between Danger Zone and Mighty Wings. The song on the opening screen mimics Also Sprach Zarathustra, most famous for its use as the main theme for Stanley Kubrick’s classic 2001 – A Space Odissey. Even Stairway to Heaven makes an appearance! The remainder of the music ranges from fluffy BGMs to dark, moody tracks in the second loop, some of them with aggressive piano work. 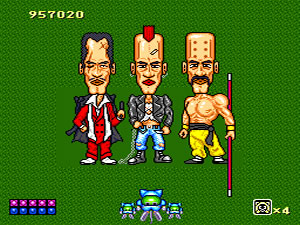 Controls are simple: shoot with button II, trigger a bomb with button I. This “bomb” works by creating a quick forward barrage that disintegrates bullets on contact. You start the game with three bombs in stock and three health cells per life, with the possibility to expand both with appropriate icons collected from inside ground chests. The only way to open the chests is by getting close to their keyholes, shooting won’t do anything. Don’t rush up after opening the chests because you might get the item without seeing what it is: the speed-up icon, which looks like a small joystick, is actually the only one to be avoided in my opinion (multiple speed-ups can lead to an uncontrollable avatar). All other items are of strictly beneficial nature: the green P is the shot power-up, the purple P recovers one health cell, B grants an extra bomb and Lv increases the health meter by one cell.

Whenever you take the first green P two sidekicks will materialize by your side and provide additional firepower. Further power-ups will upgrade you until you start firing a couple of very powerful homing shots (it's impossible to power down). You can have up to 6 health cells and a maximum bomb stock of 5, and every surplus item collected after that is worth 10.000 points. That’s the part of the scoring system that goes beyond the basics of killing everything for points and milking bosses for their destructible projectiles.

Considering the fact that God Panic’s easy difficulty hinders its overall appeal, the real charm of the game comes from the awkward enemy gallery and the tidbits of music spoof, as I mentioned above. Staple shooting foes such as planes, cannons and bosses are mixed with cookies, stick figures, old villagers, fat bearded men, cars, dancers, candles, pigs, ninjas, bonsai trees, mohawk punks, head statues, geishas that get briefly naked when you unbelt them, a farting warrior and even bodybuilders (seemingly no relation to Cho Aniki, as both games are contemporaneous with each other). Albeit devoid of much animation, bosses are often large and menacing, some of them in a goofy way. Stage duration varies greatly: the third level above the ancient village drags a little, and then stage 4 comes with a boss rush that ends against a green dragon. The bald elderly god makes an enigmatic appearance in the last stage as you need to defeat the cat-boss twice.

As soon as you beat the final cat-boss the game restarts without a single ending screen. Unfortunately there’s no increase in difficulty, however God Panic throws a different kind of twist if you’re willing to replay it. All those shiny graphics and uplifting music receive a complete overhaul – backgrounds, enemies and bosses get repainted in gloomy sprites conveying devastation and decay. All houses in the village stage, for instance, appear to be destroyed, and people’s faces acquire an evil countenance. At least the humor is preserved in mocking details, such as the name for the first boss changing from RED CHOCO PUDDING to BAD CHOCO PUSSING.

By the time you score one million points you’ll have earned all four score-based extends (100K, 300K, 500K and 1M), which honestly should help anyone beat both loops on his/her first try (the game ends after the second round). It’s hard not to feel disappointed by the difficulty in God Panic, especially because the second loop adds nothing to the challenge. Besides, instead of being confronted by properly designed bullet patterns, most of the time you get hit due to enemies coming from below or because you were rammed by a few lightning fast attacks. This means that ultimately what matters here is the wacky experience. Where else can you undress a fat geisha on the fly?

God Panic buffers high scores at the start screen, but after the ending credits are done you get stuck and need to reset. Fortunately you can also pause the game anywhere as long as the screen doesn’t fade out. Here’s my final 1CC result playing on Normal, I did take some hits but lost no lives across both loops: 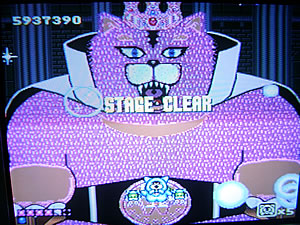