Being “super” was the flagship of many SNES games even though most of them didn't live up to the hype generated by Nintendo, especially during the console's launch period. Super R-Type was included in the initial release waves and represents Irem's adherence to the “super” trend. While not a “super” version of the first game and not a straight port of the second one either, it kinda works as an arrange version of R-Type II. It follows the flow of the second chapter in Irem's most famous spaceship shooter franchise, but most probably due to the difficulty of technically mirroring the arcade game there are quite a few changes on graphics and bosses alike. I guess the inclusion of a brand-new starting level was a way to compensate for the losses, so to speak.

Super R-Type might not have met the expectations of fans back then but it's nonetheless a fine shooter, even more so for those who're fond of the series. A few people might disagree with me on the basis of the single checkpoint system, but the game is definitely not as hard as R-Type II in the long run. Infuriating as it is to die at a boss and start the stage from scratch, overall Super R-Type softens the original challenge because it's a much slower game with fewer bullets, easier bosses and less crowded levels. Changes in the soundtrack are less harmful to the porting job, but the quality is duly preserved and makes for an equally pleasing musical backdrop. There are those who even consider the music in this version to be superior to the arcade game’s. I like them both. 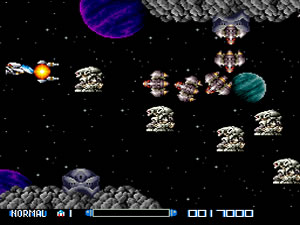 New beginnings in a rocky planet

With the bulk of the gameplay inherited from R-Type II, in Super R-Type we have the same old drill everybody knows and loves about the series. Be it with the pea shot (button Y) or the charge shot (button B), you must blast off and strike all those evil Bydo minions, acolytes, aliens, etc. The charge shot can be charged up to two levels, with the second one peaking and cycling over if you keep the button held down permanently. Release it on its charging peak and you’ll unleash an even more powerful blast, capable of killing large enemies and bosses in a single blow. As powerful as it is though, the R9C (C for Custom) still needs its share of upgrades hidden within the slow-moving walkers. Destroy them to obtain upgrade capsules, starting with the extremely important speed-up (S).

Then we have the colored power-ups, with the first one giving birth to the force pod, an invincible energy sphere that can be docked/undocked (button A) to the front or the back of the ship while providing extra firepower, damage by contact and invaluable defense against regular enemy fire. The next two power-ups you take will activate and max out one of the five available weapons: red (wave cross-laser), blue (3-way ricocheting lasers), yellow (crawling energy streams), gray (short-range exploding clusters) and green (forward bubble shot). Each successive power-up upgrades the ship regardless of its color. Missile is a uniquely powered item and is determined by the color of the M capsule: red is for homing, blue is for ground scatter missile. The last item released by the walker is the “bit”, a small half-sphere made of the same material from the force pod. The first one hovers above the ship and the second one takes the lower spot.

Having two bits + the force pod is the best protection you can get against flocks of enemies that close in from all sides (falling debris of the 6th stage, baby aliens in the last stage). Losing such a fully powered ship is one of the most frustrating feelings you can have in the genre, and only in games like Super R-Type you have the chance to experience this kind of failure. In order to avoid it like the plague, pure memorization is the best advice I can give. On the surface it’s seemingly fine and easy to get through a given stage, but watch out for that slow moving bullet or those enemies that suddenly approach from an unexpected angle due to a slight difference in ship position. They mean death when you least expect it. Ironing out all the possibilities of danger is the name of the winning game, never mind too much about scoring because it’s as basic as it gets.

Going a bit deeper about dying in Super R-Type, special considerations should be made regarding slowdown. While it’s not as over the top as several sources point out, it does incur in problems such as the slingshot effect (transitions from slow to regular game speed making you ram into walls) or bullet timing issues. On the 6th boss, which by the way is inspired by R-Type's 4th boss, it’s often safe to stay close to the bottom of the screen as the blue lasers fired by the moving blocks graze above the ship’s canopy. In the process of beating the game I died twice consecutively in the very same place: moving up from the bottom left of the screen and as I thought the laser had already passed by me, when in fact it hadn’t cleared the screen at all. Totally pissed, I had to take a break after that and instinctively adapt to the slowdown at this particular point in the game.

All original stages from R-Type II are displaced by one level in this port. For example, what was originally stage 1 appears as stage 2 in Super R-Type. Outer space sections aren’t as numerous as the organic or industrial settings, but they all create a nice shooting atmosphere. The first biggest difference from the arcade game is in the space fleet level (stage 4 here), which gets simplified by a good stretch. The maze and moving blocks from stage 6 are completely replaced by a robotic facility filled with mechas and debris falling from top hatches or being transported in conveyor belts. These stages have completely different lay-outs and are pretty much unique to this port, as well as the new opening level and the quick intro that shows the R9C being launched into outer space.

You can also spot other differences throughout the game, but they’re all minor with the exception of selected bosses (which are all fought in separate chambers). What matters most is the new behavior of two of the available weapons. Originally a series of lasers with slight bending capability, green was completely reworked into the forward bubble weapon, definitely losing its post as second best choice after the wave gun (red). That post was taken by the gray weapon, which is now much more effective and is actually capable of inflicting consistent damage. Going the distance is still easier when you’re able to stick to the red weapon, an extremely precious item that’s totally absent from the game after the midpoint in the third stage. By then you’ll probably have acquired the first couple of score-based extends, which are awarded at 40K, 80K, 160K and 320K.

The direct sequel to Super R-Type/R-Type II would be released two years later exclusively for the Super Nintendo under the name R-Type III - The Third Lightning. There's no denying it's a more polished game than Super R-Type, but that doesn't disavow the fun you can have with this somewhat bastard entry in the saga of humanity against the Bydo. My time with the game ended with the following high score, achieved on Normal. I reached stage 2-5. 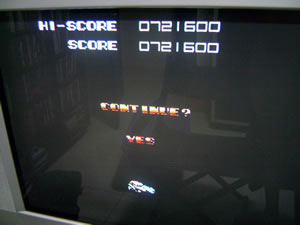