There are lots of reasons why I feel sorry for Sega. Some of them aren’t that obvious, like the personal grudge I have with the company’s absolute disregard for the Thunder Blade trademark. From all great sprite-scaling titles Sega developed in its prime arcade days, Thunder Blade was the only one left out of later reworkings such as the Sega Ages series. Once the 16-bit era ended After Burner, Space Harrier and Galaxy Force received gala treatment across several platforms, but what of Thunder Blade? Seemingly swept under the carpet as if it were a disease! All we had to savor were a couple of downgraded ports such as this one and the PC Engine’s, as well as the pseudo-sequel Super Thunder Blade.

Thunder Blade in its arcade form is a visually stunning experience, even more so than any of the abovementioned sprite-scaling rail shooters. Obviously an 8-bit port like the Master System’s isn’t technically comparable to the source material, therefore serious compromises must be made if you want to enjoy the game as it is: a pretty basic shooter that "tries" to mirror the structure and the look of the original title. The scaling effect and the frame rate might be poor, but seeing as the port is perfectly able to handle the task imposed by the simplified gameplay rules, under some aspects it actually ends up being a more cohesive take on the arcade game than Super Thunder Blade. It certainly feels harder, maybe even faster. 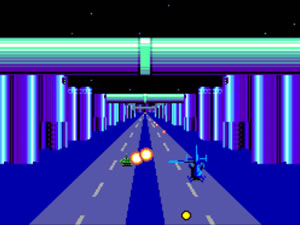 An evil oil refinery during the night

All stages in the Master System port of Thunder Blade start with a common vertical orientation. Airborne enemies must be destroyed with the machinegun (button 1), ground targets can only be taken down using missiles (button 2). Once the vertical part is over you enter an area where you fly into the screen with enemies coming towards you. The same inputs apply to these sections – jets and helicopters approach by air, tanks and boats will try to crush you from ground level. Later on you return to the vertical scrolling area to destroy a large aircraft/shuttle turret by turret. The only exception to this second vertical part is in the 4th and last stage, since the final boss needs to be defeated in the rail shooting environment.

What the game proposes as challenge is pretty simple: infiltrate enemy terrain and survive, reacting to each and every wave with what’s given to you as weapons. There are no power-ups in sight and absolutely no way to control flying speed (unlike the arcade game or Super Thunder Blade). Resistance gets increasingly tougher as you advance through the stages, starting in city streets and going through forests/caves, a river raid and a final strike in an oil refinery. The vertical parts with bosses from stages 1 to 3 are jokingly easy, but all other sections have their own sets of hazards.

Common vertical parts can be deceiving. Flying formations and tanks are arranged in such a way that you might get yourself cornered when trying to kill everything that shows up. When the action shifts to the rail shooting perspective the main concern is with the lines of tanks that can’t be engaged because you’re not close enough to them, which forces the helicopter to move around and be subject to cornering, especially when aerial waves overlap. Speaking of which, each type of flying wave attack has an optimal strategy to be dodged. The most problematic one for me was this jet flock that fires a blazing fast horizontal bullet spray. You need to go up and down to avoid it, pretty much basing the movement on graphic cues and sound effects alone. When stage 2 ends you’ll have seen every single enemy attack, then things get really busy in the third stage, by far the hardest level in the game. The pipes in the oil refinery are only for show if you stay glued to the ground sweeping from side to side. If you do this you’ll never hit any of them! Let’s not forget that tapping is the king maneuver during busy parts.

Is it Blue Thunder? Is it Airwolf? No, it's Thunder Blade!
(courtesy of YouTube user Vysethedetermined2)

Of course the scaling on the Master System version of Thunder Blade isn’t perfect, but the trees in the third stage look so awful that at first sight the graphics seem to be broken. Thankfully the rest of the game looks fine for 8-bit standards. As challenging as it is, some shortcuts made in the port allow for more freedom of movement and consequent ease in the gameplay. You don't die by colliding against an enemy in the rail shooting parts, for instance, and all scenery such as pine trees and buildings are just as harmless. Beware of pillars and pipes though (remember to stay low in the oil refinery stage). Note: that last section of pillars inside the caves reminded of Battletoads and its infamous hoverbike level.

There’s only one song playing during the whole game, but it’s so fitting that you hardly even notice that. It’s also nice how the coolest bits of music seem to be synched to key points in the level design, like when you come out of the second cave in the second level. A rudimentary scoring system awards bonus points based on the number of enemies destroyed when you finish a stage. The lowest bonus is 10.000 for at least 50 kills, and the maximum bonus is 400.000 points for 160+ kills. Getting 500.000 points gives you the first extend, further ones are granted for every extra million. Unfortunately the only times you'll see your score are during level transitions and when the game is over. Normally there are no continues, however by pressing diagonal down to the right and button 2 on the GAME OVER screen you’re able to continue twice.

I enjoyed this game more than I had expected, probably because it’s actually a short playable romp and because I had a rapid fire unit inserted between the controller and the console (you definitely need it, the game has no autofire whatsoever). Besides, anything with helicopters is cool by default in my book. Leave it to Sega to ignore the Thunder Blade legacy completely, for now this is the 1CC outcome of the time I spent with the Master System port: 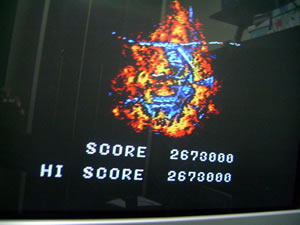