F-15 City War shows no credits at all during any of its regular screens, but online sources reveal a company named Idea-tek to be the developer. More obscure online paragraphs, however, hint at the fact that Idea-tek is, in fact, just another incarnation of infamous unlicensed developer Sachen. It makes sense, given the circumstances in which the game found its place all around the globe.

A shameless copy of Thunder Blade, F-15 City War replaces the combat helicopter of Sega’s classic with an F-15 jet model and reworks its assets to deliver five stages of unbelievable boredom. Sure, the game does get taxing in its final level as a consequence of sudden checkpoints where previously were none. That makes no real sense, but I guess the developer was aiming at giving a little more life to what could otherwise be a meaningless experience. For those wondering, besides trumping F-15 City War on all fronts Thunder Blade on the Master System is also a much more uniform and fair game as far as challenge goes. This NES clone is riddled with washed out colors, poor scaling effects, bad sound design and dull music - which never changes from a monotone series of muffled beats and sounds (it does remind me of the theme for the Savage Land stage in X-Men for the Mega Drive though). 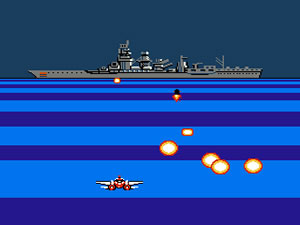 Kinda following what was established in the original mold, stages alternate between rail shooting and vertical shooting. Prepare to face three rail segments (city, oil refinery and caves) and two extremely slow and sleep-inducing vertical campaigns in open water. All levels are drawn-out and seem to take forever, with the same gameplay rules applied to all of them: regular shot with button B and missiles with button A, no autofire whatsoever. Missiles are aimed at ground targets and have a lower firing rate. In any case, my advice is to get a turbo controller to make the experience less painful. There are no power-ups at all, and the only item you’ll come across is the 1UP left by the static red choppers in the vertical levels.

In the first stage enemies are restricted to tanks, helicopters that don't shoot (they never shoot anything) and a few incredibly fast jets that spam a bunch of bullets before disappearing. They are almost impossible to hit, just like the tie fighters from Star Wars (!) that start appearing in the third stage. By the way, just the simple task of destroying all tanks in a single line isn't easily done either due to the low firepower or the horrid hit detection. At least it's not hard to dodge their incoming fire, otherwise the frustration level would be even higher. And don't worry about meeting any other types of enemy in the following rail shooting sections. Apart from bosses and an indestructible robot that likes to visit and leave in the third stage everything else you'll see follows the same unimaginative pattern of tanks, helicopters, jets and the occasional batch of tie fighters.

During both vertical levels most of the danger (if any) comes from the boats and mines overlapping their shots with descending choppers and solitary turrets from large battleships. Hint: the closer you are to the bullet sources the slower their bullets will be. If you let mines stay on screen too long they will turn into missiles and home in the jet's direction, so just prioritize them and you'll be okay (remember that boats and mines are only killed with missiles). Most of the time the screen is so empty that after a while those little dots that are supposed to convey water movement start to hypnotize you, sort of fullfilling their intent in a weird way. Long after the player has grown tired, vertical levels come to an end with no boss fights whatsoever. The scrolling just stops and you're launched into the next rail shooting stage.


I am the hero of the city war!
(courtesy of YouTube user Vysethedetermined2)

Horizontal pipes in the oil refinery level are there just for show, which makes this stage as easy as the first one in the city. The graphics are still devoid of much life, but the scaling effect is worse and barely makes you believe you're flying forward. However, City War's poor production values only show their true face in the last stage. What you have there is just a psychedelic series of scrolling horizontal bars, which fade out after a while and give way to rock pillars as if you were inside a cave. The bad news is that if you die amidst the pillars you get sent back to the previous section instead of instantly resuming play. The first time I got there I lost all ten lives I had in stock in my attempts to figure out ways to deal with the dreadful frame rate. My final strategy was to be on my guard for two tricky pillar combinations: two close pillars offset by just a little space (dodge full left or full right) and three pillars with the middle one slightly delayed (dodge full left). Pillars are ramdomly generated, so memorizing is useless. As for the bosses in the rail shooting parts, they're all pushovers - just circle around and dodge their bullet streams until all turrets are gone.

I mentioned ten spare lives, right? Well, besides the 1UPs you're also entitled to score-based extends. I don't know how these work though since the score isn't displayed anywhere during gameplay (pausing only shows the number of lives left). Stage bonuses are based on the number of enemies killed, and to see your final high score you need to reset the console from the last screen in the ending sequence.

F-15 City War is done. My next rail shooter on the NES will be a better one, I'm sure! 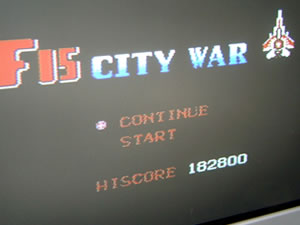