Until very recently I knew nothing about Zed Blade apart from its famous “love-it or hate-it” techno soundtrack, composed by the now celebrated Manabu Namiki (Battle Garegga, DoDonPachi Dai-ou-jou, Mushihimesama). Also known as Operation Ragnarok in Japan, the game was originally released on the MVS arcade platform, but soon found its way to the Neo Geo AES home system thanks to the cartridge converting wizards. That’s how I was able to enjoy it.

You don’t need to know the story to realize that as soon as the game starts you’ll be drifting away from Earth into the heart of the Solar System. All levels and bosses have names, and I guess that’s one of the easiest and yet most efficient ways to carve key aspects of any game into the player’s memory. If you play Zed Blade to the end I bet you won’t forget how it depicts names such as Constrictor, Loki and Yggdrasil. And what about a boss whose title is none other than Insane Ship? Unfortunately, the curious names and the great soundtrack represent the peak of whatever personality you will find in Zed Blade. I won't complain about the challenge as well, since it's actually of decent caliber.

Three different pilots define how fast you’re able to move. Uncle Beard is slow, Ms. Charlotte flies at middle speed and Swift Arnold is fast, and while their ships have different sprites they all seem to posses the same hitbox areas. Once the pilot is chosen you must configure the ship’s weaponry in three steps: (1) shot, (2) missiles and (3) rear. There are three options for each weapon, and these include common types such as spread/3-way, wave, straight/twin or homing, as well as a variation with vertical reach for the shot/frontal weapon. I believe that configurations like 3-way/A-S/2-way are the reason why many people see a similarity between Zed Blade and Darius Gaiden. That’s absolutely not true for the rest of the weapons or the game itself, which does not resemble Taito’s epic shooter at all. 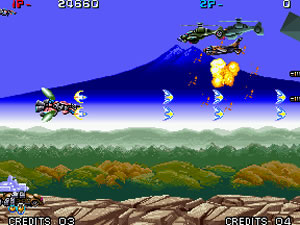 Are you ready for the battles?

A single button is used to fire all weapons at once. A secondary button is used to deploy the bomb, a powerful energy outburst that makes the ship invincible as long as it lasts. Upgrade items and extra bombs appear inside certain enemies, which must be destroyed for you to take them. Power-ups cycle continuously through P (shot), M (missiles) and R (rear). All items, including extra bombs, will bounce on the left border of the screen and disappear to the right. The blue bomb item is special because it upgrades all bombs to “hyper” status for the current life (all icons in the bomb stock switch to a shiny green H). It takes three power-ups to max out each respective weapon, and the good news is that you’re downgraded only one level for all of them when you die. Upon every death two random items will appear from the right, so if you’re fast enough it’s possible to regain maximum frontal power almost at once.

The odds you’ll face when armed with the arsenal and resources described above will depend on your life stock, for that’s primarily what defines rank in Zed Blade. 1UPs will automatically come into the screen as soon as you reach 200.000, 800.000 and 2 million points, and if you go on without dying each extra life adds an extra layer of aggressiveness to the enemy behavior. This increase in difficulty results in a much higher bullet density combined with increasingly faster bullet spreads, to the point where deaths almost often happen due to sheer overwhelming and inevitable cornering. Performing well in the first half of the game is a safe pass to a second half filled with tighter patterns and overlapping enemy attacks. The only way to deal with that is to rely on methodical memorization (beware of enemies coming from behind) and panic bombing (don’t be greedy!).

Occasional slowdown might kick in depending on how crowded the screen gets, but it's much more common when two people are playing together. While the basic gameplay and the challenge rules complement each other well, the same cannot be said about two important aspects in the game. The first one is the graphic design. NMK tried to infuse dynamism through several layers of parallax, but when you have stages 3, 4, 6 and 7 with basically the same backgrounds (bar a few asteroids here and there) you can’t help but feel the stench of laziness and lack of creativity. That makes the game seem longer than it actually is and leaves all responsibility for any graphical appreciation on the enemy gallery's shoulders.

The second aspect that kinda falls apart in Zed Blade is the scoring system. Besides the extra points gained for every surplus power-up collected (5.000 or 10.000 points), it relies heavily on the fact that every hit you land on an enemy/scenery results in even more points. That opens lots of possibilities for milking, and while valid this technique just comes out as boring and stupid. Just to have an idea, to score higher in the first stage it's always better to avoid all enemies and focus on hitting the ground only! During boss fights simply avoid hitting their weak spots and point-blank their bodies to no end (bosses don’t time out but at least react on abusive milking by firing unexpected extra bullets). And here's where things get really dumb: rewards for the hit-based scoring vary according to the character used. Uncle Beard gets 50 points per hit and Ms. Charlotte 30 points, while Swift Arnold gets shafted with only 10 points per hit. This is the first time I see a shmup with multiple characters render some of them totally useless for score chasers, and in my opinion that’s just complete fail.

Even with all the aesthetical and functional shortcomings there’s no denying that Zed Blade is a fun shooter, provided you can play it with autofire. At its core the game offers an engaging mix of strategic/twitchy dodging, with a reasonable learning curve that duly considers the seemingly huge ship’s hitbox and keeps players on their toes all the time once you're halfway into the game. Late bosses are cheap (6th on high rank, 7th at all times) and disappointing (last one), but the action in the levels themselves more than compensate for that. And the soundtrack? At some points it might make you want to shake your body a little. It’s awesome.

My 1CC score was achieved with Uncle Beard on the MVS difficulty setting of an AES cartridge conversion, with the ship configured as 3-way/homing/twin (S/M/R). I had autofire enabled (PS2 turbo controller + Tototek adapter) and didn’t do any extensive milking… Just a little to get the first 1UP prior to the first boss and a short beating spell on Lunar Walker’s body. 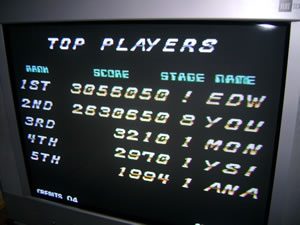