No matter how bad things are, the truth is that they can always get worse. I don't remember who first said this, but unfortunately in the case of Hucast and DUX Version 1.5 the saying fully applies. I don't want to sound like AVGN, but what were these people thinking? Releasing new versions of the same game isn't really a novelty (if Cave does it, why can't we?), but squeezing it to the point where it gets ridiculous isn't healthy for the company's image at all. DUX 1.5 was initially awaited by many Dreamcast fans in the form of a single patch disc that was supposedly meant to reach all buyers of the original game. However, besides being included as an extra in the upcoming REDUX - Dark Matters it was also released with proper case and instructions. Twice. First as a stand-alone piece and then with the rearranged soundtrack one month afterwards.

Naturally, being the avid collector that I am I promptly ordered the stand-alone package. You see, crystal balls don't really exist in the real world. As dissatisfied as I was/am with Hucast, I can at least trust that the REDUX package will include the soundtrack in its limited edition. But alas! Above all I'm a gamer, so on to the game itself.

DUX Version 1.5 is supposed to be a checkpoint-free version of DUX with rebalanced gameplay. This iteration was spawned from the harsh criticism the original game gathered soon after its release in 2009. Even though DUX had flaws, I could live with them just fine. But if you care about sticking to the single best variation of a shmup, in this case I recommend you choose the game's first incarnation. For all it's worth, Hucast mistook the term "rebalanced" for "dumbed down", turning DUX 1.5 into a shameful joke. 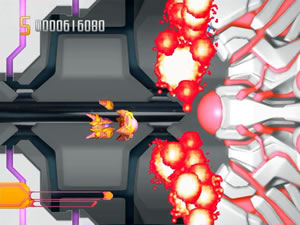 First, the gameplay rules: besides the regular firepower, the ship is able to fire an overriding charge shot with a different button; a permanent force pod is connected to the ship and can be detached/docked at the press of a button (a wider shield can be found later to help protect the ship from incoming diagonal bullets); three weapons can be switched by collecting the corresponding item (yellow = straight gun; light green = bouncing lasers; light blue = wave lasers); auxiliary missiles can be acquired with an item and have their direction switched at the press of a button; "obvious" particles help fill a meter faster with energy that can be used to absorb enemy bullets by pressing another dedicated button, and as long as you have obvious energy and you're soaking enemy firepower bullets can't harm you.

In essence, the basic gameplay here is the same as in DUX. When one thinks about "rebalancing", getting rid of the checkpoints and allowing the player to not continue (by pressing Y at the GAME OVER screen) were certainly the most simple and yet most expected changes in DUX 1.5. Instead of stopping there or addressing what really needed to be rebalanced in the gameplay (charge mechanic, "chain" system/tracking, scoring rules, weapon strengths, power-up colors), all further tweaks were lousily aimed at dumbing down the challenge to ridiculous levels. Allow me to point out some of the rebalancing work:
Pod behavior, weapon strength and overall enemy aggression are unchanged, and given the changes described above I'm not surprised you're still invincible while soaking bullets - the feature still serves more as a survival tool than a proper scoring device, and you still can't track the efficiency of your chaining/soaking. I don't know if the 50Hz scoring bug was corrected, but that wouldn't affect me anyway. The option to turn the game into a TATE vertical shooter was revoked, as well as the visibility settings that made the backgrounds cleaner. While they weren't really needed, I can't imagine why you couldn't have them for curiosity's sake.

The revised gameplay in all its, aham... glory
(courtesy of YouTube user Sukeroku SGAD)

"Isn't there nothing good to say about DUX Version 1.5 then?"

Well, for those who care the game does allow button remapping, and the soundtrack is even better than before. If you consider that being piss-easy is an improvement (especially when compared to the original version), add that to the basket of good things as well. In all honesty, I can't think of anything else besides the fact that this game is perfect for newcomers and children.

Below is the final 1CC high score achieved in a couple of break sessions from a much harder shooting game I'm trying to learn: 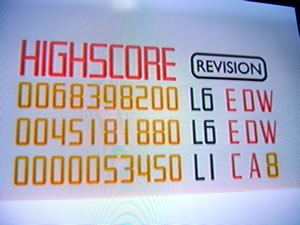