Once upon a time, in the realm of homebrew games released for the Dreamcast, there was DUX. Despite some weird flaws it was at least a playable and gorgeous game. Later on the developer felt the need to revise the game and cater to the complaints of the masses, and then there was DUX 1.5. It was a shameless disappointment and added nothing of real value to the original. Some time later, thanks yet again to sloppy programming, Hucast shoved DUX 1.1 onto customers, but I have no idea about what it does to the original game. And then, in 2012, a Kickstarter campaign was created and succesfully funded for REDUX - Dark Matters, a misleading title that made lots of people (myself included) believe we'd be getting a sequel to the game when, in fact, it was nothing more than a repaint of DUX with an extra stage and an extra ship.

One thing I learned from all this is to never get your hopes up when purchasing a product from German developer Hucast. Ever. REDUX was the last straw for me, especially when I received the Kickstarter-exclusive steelcase with a single sticker glued to the cover and two CDs that barely fit the lousy supports on the inside (the second CD is just a bonus disc that contains DUX 1.5). At that moment I envied those who had ordered the regular version and had at least received a normal box with proper art.

There is more to it though. A couple of months after the game finally saw the light of day a REDUX 1.1 revision disc was promised for all Kickstarter backers, addressing freezing issues on bosses and a scoring bug as well as the blurry image (only for S-video, VGA and RGB connections). At the time I was busy with real life and lost the window to request my disc, but since the reported issues are a lot like some of the ones identified in DUX (plaguing 50Hz/PAL users only), I certainly won't be losing my sleep over it. 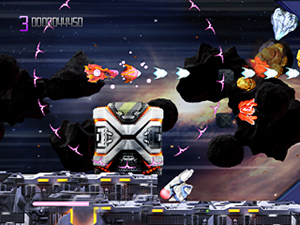 REDUX is indeed built upon the primordial mold that gave birth to DUX. However, due to all the details whose objective was to give a darker tone to the whole game, apparently there was this need to lower the original resolution, hence the awfully blurry graphics that put the almighty Dreamcast to shame. Of course the longer you play the more used you get to it, but the initial impact of the downgrade is astounding. However, apart from the graphics there are other more fundamental changes and additions to the formula, which make the game seemingly more dynamic than previous iterations and point to the fact that Dark Matters is the final product following all those beta versions disguised as proper releases.

For a starter, when thinking of R-Typean influences REDUX is more akin to Pulstar than R-Type itself. This means it doesn't allow players to detach and summon the pod anymore because the pod is permanently fixed in front of the ship once you get the first power-up. Pod manipulation was never needed anyway, so this takes a lot off the shoulders of players from the get go. In fact, REDUX is a game where it's okay to take everything that comes towards you since none of the icons/upgrades you come across interfere negatively in the gameplay. You have power-ups for main shot (the choice of more than one weapon is gone), missile upgrades (provides 2, 4 and 6 missiles with each icon collected), side shields, stars (bonus points), 1UPs and obvious energy (refill the bullet soaking bar faster). Golden flakes of varying sizes appear everywhere from destroyed enemies and are sucked into the ship if you get close enough to them, adding to the score in the process.

I guess I should now give a mention to the controls. They're all configurable, and my layout of choice is R for autofire, A for shot (charge for beam), X to switch missile direction (horizontal/vertical) and B for bullet soaking. The only input that needs some explanation is the last one: when B is pressed a circle is deployed around the ship and every bullet inside its radius gets sucked into it. This lasts until the bullet soaking bar is depleted (see below the charge gauge), during which the ship remains invincible to bullets (not enemies or lasers) and new taps at B fire homing lasers on all enemies caught inside the circle. In order to keep the bar filled you either need to soak more bullets or acquire more obvious energy, those pink bits released by square caskets that are automatically drawn into the ship no matter how far they are. Note: if a large enemy has been locked on and the bullet soaking bar depletes you're still able to fire homing shots at him.

Besides the invincibility factor and the fireworks display provided by the bullet soaking device, most golden flakes released by destroyed enemies turn blue and are also sucked into the ship automatically. “Nice!”, I thought at first sight, obviously expecting some sort of boost in score when doing it. Sadly everything about this bullet soaking scheme is there just for show. It doesn’t matter if you collect golden or blue flakes or if you absorb bullets while invincible or using the pod, the real practical purpose of bullet soaking is geared towards survival. It’s a wasted feature, and there’s absolutely no need to manage its usage for maximum performance as I tried to do for a while.

When starting a credit of REDUX - Dark Matters players are prompted to choose between a Normal (orange) and a Veteran (purple) ship. Note that all the above paragraphs refer to the Normal ship choice. When selecting Veteran, the charge beam and the missiles are the only aspects that remain the same: main shot is changed into a 3-way rapid fire spread, you can’t use the pod and bullet soaking is not possible. The game becomes a lot more challenging and claustrophobic when going the Veteran way, with stages 2 and 5 being really fun to navigate. Deadly flower blossoms and venomous spores were rarely so menacing.

Both ship types are downgraded a little every time you die. There are many 1UPs to collect throughout, but losing two or more lives in a row can put you in dire straits if you’re using the Veteran ship. Regardless of the chosen craft, the rule of thumb for scoring is to not die (life count seems to work as a multiplier for boss kills) and absorb as many flakes/bullets as you can. The bonus for each stage corresponds to its number × one million points (1st = one million, 2nd = 2 million, etc.). Scores are segregated by an N and a V in the only high score table available, which is really unfortunate.

When all is said and done about REDUX, the truth is that it does reach a better balance than its previous incarnations. I definitely can't complain about the stellar soundtrack! It manages to be even better than before by striking a finer balance between exciting and moody. That helps heaps in keeping the fun factor, despite the wasted opportunities regarding the bullet soaking feature. The muddy graphics become less of a strain on the eyes after a couple of hours, and while the extra 7th stage comes off as a bit lazy (same meteor-filled background of stages 1 and 4) it at least puts some pressure even when playing with the Normal ship. As I mentioned above the packaging for the steelcase edition is atrocious, just like the pamphlet that serves as a poor man’s instruction manual. Lastly, several times I ran into a bug where I'd get altered/exploded graphics and mute SFX whenever I rejected a continue on the GAME OVER screen.