Going after the more obscure items is something that will eventually happen to all collectors if they continue digging deeper into their hobby. In my case, one of the most interesting shmup oddities I came across recently is Fren-zE, a little game inserted with absolutely no warning in a demo disc that came with the 55th issue of the Official UK Playstation 2 Magazine, released in 2005. By no warning I mean the game isn’t mentioned anywhere in the DVD-sized cover (since I only own the disc I can’t vouch for the magazine). Fren-zE is also present in the demo disc of the previous issue of the same publication (#54), and although normally hidden it can be unlocked with a simple controller button combination.

A rather simple homebrew vertical shooter with minimalistic design, Fren-zE has shades of previous independent works such as the ones delivered by ABA Games (rRootage, Parsec 47). Vector-based graphics establish the mood for your lone ship to go against a series of abstract enemies and bosses in three stages. We all know this visual approach has been beaten down to death by years of independent PC game development and tons of questionable similar games released through XBLIG, but nevertheless I’m thankful that this title exists in physical form for the Playstation 2. Despite its simplicity, Fren-zE is sympathetic enough and serves as a good exercise in micro-dodging and bullet pattern recognition. Plus I’ve finally found a shooter that rivals Score Rush in having just a single badass BGM playing during the whole game. 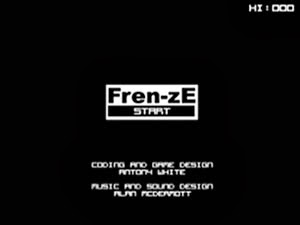 Once the disc boots you’ll find Fren-zE in the Comedown section of the main menu. There are absolutely no frills about it, no options, no special settings, just an opening screen waiting for the game to be started. Shapes of different colors and sizes convey the idea of spaceships and saucers while slow patterns of triangle and square bullets dictate the dodging flow. Lives and score display appear on the left, high score on the right. Destroy everything with button × and collect the blue dots left behind for points, each dot being worth 1 point only. Mid-bosses and bosses yield a yellow power-up, for every 50 points scored the player gains a new life and when you die you're respawned in the same place with no power loss. It’s that simple, so anything beyond this falls into the category of gameplay details.

Since every enemy leaves a single dot to be collected for score, the maximum amount of points a player can get from beating the game is 297. When a boss is defeated your performance is tallied and you're told if he was “unlocked”, a reward for getting all possible dots in the previously played level (55 in the first one, for example). Unlocked bosses return for a boss rush after the third stage is completed, and by defeating them again a brief message displays your rank status in a humorous fashion. There’s a very amateurish bug in the game that sends your score back to the one you had between stages 2 and 3 every time the boss rush starts, but at least the high score display keeps your performance up to that point. Since there’s no extra prize for getting through the boss rush, not even a few more points or a marginal increase in difficulty, it just comes out as a lame afterthought for an extra stage – the only real letdown in an otherwise competent little shooter.

Being so short naturally serves as motivation for one to try perfecting the score, and as soon as I had reached the end I decided to film a sample credit and refine my strategies based on it. The first level isn’t hard at all, but positioning gets increasingly relevant after that. Come the bullet spams of the third level it’s really hard not to lose lives in order to get all the blue dots. Speaking of which, dots are subject to the ship’s gravitational force, so you don’t need to exactly touch them to register the catch. This is very important because later on they come in flocks and it's pretty easy to lose them if they're spread around the screen. Using the gravity field of the ship to attract the dots is definitely needed if you want to score higher.

Fren-zE might be a curiosity reserved only for those willing to track down a demo disc, but I can’t deny it’s a nice one. It’s an excellent way to introduce new players to the wonders of the reduced hitbox in shooting games, after all the glowing square in the spaceship’s dead center is the only part of it that’s subject to damage at any given time. As for the red cores present on bosses, never mind them. Bosses have no weak points at all, their whole bodies are always subject to damage. Considering the fact that bosses time out and might leave the screen, it's important to concentrate fire on them in order to always get the power-ups they leave behind. Point blanking helps a lot, but overall the firepower and the built-in firing rate are perfectly balanced and evolve in harmony with the increase in bullet count.

A more accessible PC remake/revision can be downloaded directly from the developer’s website (although a relatively obscure developer, hermitgames also made the moderately successful caravan-styled Leave Home for XBLIG). The PC reworking of Fren-zE includes an extra stage, improved presentation and is graphically a little more fleshed out than its PS2 counterpart. However, the added reflect mechanic makes a significant dent in the challenge level.

Below is my final result on the Playstation 2 game: maximized score, all bosses unlocked for the post-stage and pilot status of CAFFEINE FUELLED NINJA CAT. I recorded the run but unfortunately my capture card wasn't able to deal with the PAL video format, thus everything appeared in black and white. 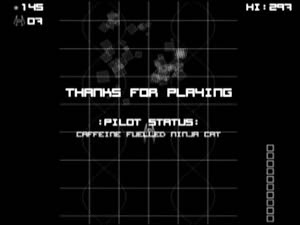