Upon a quick look at the demo it’s almost impossible for anyone who once was a gamer during the glory days of 8-bit gaming not to get hooked to The Great Paper Adventure. If you identify yourself with that generation, how could you resist the infectious chip tune music that adorns the hand-drawn graphics of this little title? That’s what prompted me to purchase the game, regardless of how vanilla the actual gameplay looked. It seemed decent enough for another cheap downloadable romp, plus it had flying cows in the first stage. Flying cows! Not even the Parodius series had flying cows, as far as I can remember. And to be honest, the last I had seen cows being correctly used in video games was in Earthworm Jim. Or Deathsmiles, I guess.

Jokes aside, The Great Paper Adventure doesn't try to do anything out of the ordinary. In fact it's a pretty straightforward nonsensical cute'em up. As its name implies, the art design is crafted as if you were playing amongst colorful paper sheets, and it succeeds at that besides the simplicity. For example, it surpasses the efforts of Border Wars while being probably on par with Paper Sky, two other similarly designed XBLIG shmups I have already savored (do I have a soft spot for these kinds of graphics, I wonder?). The Great Paper Adventure plays marginally better than these two games though, albeit not quite adhering to all genre conventions. The most severe oversight is not having an overall score for the whole game, instead you register individual scores for each section of a level. That's the exact same way you deal with scoring in Who's That Flying? for the Playstation Network, for example. 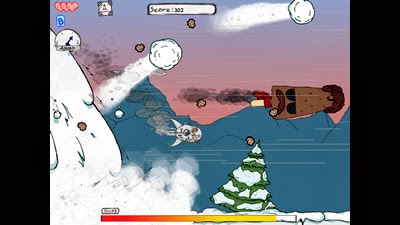 How about more ice for that cream?

Unfortunately, whatever enthusiasm I might have had prior to playing the game waned fast once I actually sat down and spent some time with it. As colorful and lighthearted as it is, the appeal of The Great Paper Adventure wears off once you notice there's no real sense of progress through the levels. You're just thrown in a series of different environments marked by uneven enemy presence and the occasional quirky bosses (at least they move a lot despite the poor animation). There are a few sections with a little more variety, such as the one that scrolls to the left and ends with a fight against a zombified little mermaid or the one where you're chasing a flying ice-cream amidst a shower of snowballs. On paper and in screenshots these descriptions sound really great, but the gameplay does not match that part of the design at all.

The right trigger shoots and the left trigger fires a screen-clearing bomb (it doesn't matter if the bomb doesn't hit anything, for as soon as it clashes against the edge of the screen the explosion will happen). Every now and then the player comes across temporary weapon power-ups, which include SMG (doubles and then spreads the regular shot), fire, rocket, shotgun (a severely capped 3-way shot) and "stuff". Two or more SMGs are good as well as rocket, while fire is very powerful but with weird reach. The idea behind "stuff" is nice, but the execution is awful because it ends up being the worst weapon in the game: what it does is drop a series of random stuff that bounces around and do almost no damage. What's worse is that the random stuff is rendered just like enemies and leads to unnecessary confusion. Other items that might appear are extra bombs and extra lives (hearts).

Attempts at humor in the story start with the journey of the nameless hero to reach his grandma's for dinner. That made me think... Is being hungry a reference to Rami or Cotton? Their main motivation is always food! Anyway, the influence from Parodius is obvious, but there's also a strong nod to Mega Man in the last boss fight. Other than that, be prepared to face several variations of octopuses, as well as dolphins, cactuses, dudes with sombreros, creatures mutated by toxic waste, inflating pumpkins and witches on brooms shooting cats. The hero's ship is a little too big for my taste but at least that doesn't get in the way of the gameplay, which shuns the widescreen format in favor of a classic 4:3 aspect ratio.

Since the game always refills your life stock for every level, more serious gamers will only want to play it on Hard. Besides, on Normal and Easy you're allowed to destroy lots of enemy shots! Deaths are often caused by enemies appearing from behind or from the sides, but most of the time bullets and enemies cruise the screen slowly. That makes even the Hard setting a comfortable and easy ride if you're a seasoned player. The scoring side of the experience is simple, with an added bonus at the end of every section where you get 10.000 points for each remaining life and 5.000 points for each bomb in stock. Therefore it's tempting to use bombs in order to wipe out large foes and reap more points, just remember that the number of bombs is unrelated to life stock. At certain parts bombs are definitely needed to escape walls of enemies coming from behind.

To accomplish a 1CC run I had to erase the save file from the game because it keeps a high score table for each section in a stage. The final group result on Hard is shown below, as well as the sum of all individual scores (7.191.923 points). And that's it: great music, disappointing action and truncated performance tracking. Probably more fun for starters. 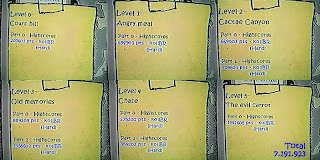