We all know genre-hybrid titles have become more common as of late, but the mixture of a horizontal shooter with a fighting game is still very unlikely no matter how far-fetched the concept. If the idea sounds good to you then perhaps it would be worth to check out Tekkaman Blade, released exclusively for the Super Famicom in Japan. Enjoying the experience, however, isn’t guaranteed by any means, for both the shooting and the fighting aspects of this game aren’t engaging enough and leave a lot to be desired. It’s no wonder Tekkaman Blade is quite obscure even among shooter or SNES fans, and my guess is that most people that care (or cared) about it are in some way fond of the animated series, created by Tatsunoko Productions at around the time of the game’s release.

The story of the anime takes place in the future and involves a deviant hero name Tekkaman Blade helping the Earth to repel an outer space invasion led by other armored soldiers like Blade himself. This isn’t conveyed in any way by the game, the only hints to any story appear in the brief dialogue sequences prior to each boss fight and in the ending credits, all of them in Japanese. What matters for us is that Tekkaman Blade must fight his way through the horizontal levels to finally confront an enemy on the ground of several orbital stations, in pure Street Fighter fashion. A double-bladed spear is his weapon of choice, be it while flying or brawling.

Flying and exerting justice with a badass weapon is awesome, right? It kinda sounds as if you’re playing as one of the heralds of Galactus! Even the way in which the character arrives on screen in every stage supports this geeky association. Unfortunately the shooting side of the journey suffers from repetitive/clunky gameplay. The fighting engine doesn’t fare much better, actually it’s even worse. 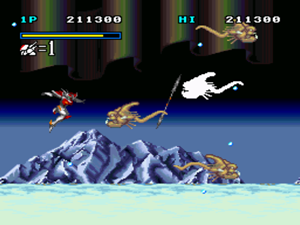 Evil creatures on an icy planet

During six stages the first part of our hero’s quest consists of a straightforward shooting section (the 7th and last level is the only one with just a shooter style confrontation against the last boss). Use Y to throw a spear that comes back to you like a boomerang, use B to slash whatever is at close range (including most bullets). There’s a health bar that gets depleted as you receive damage, and once the health bar is emptied you lose a life. The good news in the gameplay is that you are respawned in the same place if you die in the shooting parts. The bad news is that there’s no health bar refill when it’s time to fight a boss. Since you have only three lives with no extends in sight, reaching the bosses with the maximum possible health becomes crucial if you want to stand a chance at finishing the game on one credit.

In general, performing decently in the shooting parts is enough to go a long distance, especially when you realize that the fighting engine is atrociously limited. As a result, bosses come out as retarded robots waiting to be annihilated. The same inputs of the shooting parts apply here, but the spear isn’t thrown as a long-distance weapon anymore: Y makes him stick it forward and B performs a slash at closer range. Crouching, jumping and blocking enemy attacks is accomplished as in a Street Fighter game. Whenever one of the fighters receives a certain amount of blows he/she loses the weapon and has to rely on punches and kicks only (in the case of Tekkaman Blade these replace Y and B, respectively). If this happens, avoiding further damage will make the weapon materialize again after a while.

Don’t be envious of the bosses when you see them fire long-range laser attacks. Provided you haven’t lost your weapon, you can also do it by pressing A and X at the same time. The problem is that this attack is unresponsive and quite slow, and as a rule of thumb the best “strategy” against most bosses consists of approaching, beating them so they lose their weapons and slashing them to death, preferably in a corner. Never mind the few punches they might land on you, keep going and don’t let them breathe. I used different methods in just two bosses because they were more retarded than others: in the case of Tekkaman Axe (stage 3) and Tekkaman Sword (stage 5), just retreat to the left and block; as soon as they jump and bounce back hit them with any of the two attacks at your disposal.

In order to get through the flying levels the player needs to get used to the slow speed of the spear throw. Some enemies tend to cruise the screen faster than the return of the spear, and the only remedy around this is either welcoming them with a slash or moving out of their way. The pair of mid-bosses prior to the actual boss fight requires some patience to be dealt with, but once you’re used to their moving patterns much of the danger is gone. Crystal power-ups appear when a particular drone wave is destroyed: the green one refills the health bar partially, the blue one makes Tekkaman Blade invincible for a little while and the red one adds one smart bomb to be triggered with button X during the shooting section only. Don’t try to save the smart bomb for the next stage, it will only be available during the level you’re currently playing.

Had Tekkaman Blade received proper technical attention, I’m sure it would be a terrific game. I already mentioned all elements that make the concept such a cool idea. What holds it from being even an average game are the abundance of star-dotted backgrounds, the average music, the slow shooting action and the stupid AI in the fighting sequences. Okay, at some point the music of the first level started growing on me, but when I noticed it appeared again towards the end of the game I was reminded of how modestly designed the whole product actually is. In fact, from the little I researched about it the anime seems to be quite amusing, so I guess I must be thankful to Tekkaman Blade on the SNES for bringing that to my attention. For those interested, the game also has a Versus mode where two friends can select their favorite Tekkamen for some awful mindless brawling. Remember Justice League Task Force?

After the end credits the game lets you take note of your final score in the screen below. As you can see, I played it on Normal. No lives were lost on this run. 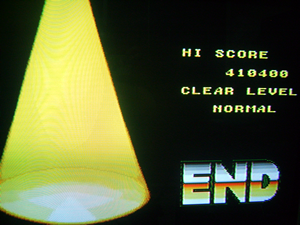