A long time ago in a galaxy far, far away there was Galaxian. Alien insects twirled, piled and conquered in the vastness of the cosmos as lone spaceships piloted by human arcade gamers endlessly fought for justice. In Galaga, the second coming, alien armies evolved for great injustice. When Gaplus happened every pilot took off with upgraded combat ships, but it was only in Galaga ’88 that the power of travelling to other dimensions allowed humans to finally apply a final defeat on the evil insect army, even if a temporary one – for those evil Galagan bugs never retreat, never surrender. After all, with no chance to survive, they had to make their time.

Jokes aside, there are many sources that will name Galaga ’88 as one of the defining games in the history of the PC Engine. Also released with the title of Galaga ’90 for the Turbografx-16 in the US, the port is still heralded today as one of best home translations to an arcade game. It makes sense, given the way gameplay, colors, pacing and overall vibe were duly reproduced. Another reason for the success is the accessible challenge level, which properly adapts the high difficulty of the arcade original to the console format. Up to that point in time, in the scale of fun fixed vertical shooters Galaga ’88 was unbeatable. Gaplus had failed to get similar recognition, and all Space Invaders games were just slow and wooden in comparison. 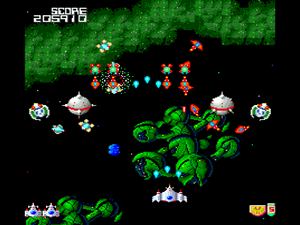 Basic Galagan behavior hasn’t changed much. Those bugs still swoop into the screen in circular motions, sometimes shooting and darting towards your position while doing it. Once the surviving ones are in formation they proceed to their particular attacks, which consist of shooting, diving, splitting, shielding, expanding, morphing, etc. As usual, dealing with them requires anticipation, reflexes, dexterity and a little knowledge about your own ship’s capabilities, starting with the choice of single or dual ship as the credit begins. Dual ship is undoubtedly the way to go because every player should attempt to acquire the triple ship as soon as possible. Here’s the receipt: (1) allow Boss Galagans (the uppermost bigger enemies) to complete formation, (2) wait for one of them to approach and deploy a tractor beam, (3) allow yourself to get captured, (4) wait for the bug with the captured ships to leave his position and (5) hit only the bug to have them merged with your new ship to form a triple ship. Despite the larger hitbox, that’s more power to you and also more chances to go the distance. If you get hit you lose one ship (triple → double; double → single), but provided you still have ships in reserve it's possible to do the capture process all over again to regain the upgraded status.

Dimensional travel is the defining element to challenge and scoring. In each of the recurring challenging stages / galactic dancing bonus levels (3, 7, 14, 18, 22, 26) you’re given the chance to warp into a higher dimension. To achieve that all you have to do is previously collect two of those blue canisters left behind either by the first stationary obstacle destroyed in any unscrolling stage or by killing one of the bigger enemies formed by the merging of two smaller bugs. Since stationary obstacles only appear from stage 4 onwards, the only way to warp before that is by allowing the bugs to merge anywhere in the first two stages. Each dimension is harder than the previous one and comes with its own set of different bugs. The stakes are simple to understand: avoid warping to higher dimensions and play an easier game with less scoring opportunities.

Galaga ’88 feels fresh even for today’s standards, and for good reasons. As stated above, the stage structure and the approach to powering up are remarkably flexible. The game also manages to throw a few scrolling levels that lead to boss fights, and even these bosses are dictated by the current dimension the player is in. Unlike in the arcade original, here you can spend the whole game in the first dimension if you so wish (originally you were kicked into the 2nd dimension after stage 10 no matter what). By the time you reach the last stage (29) a specific final boss awaits depending on the current dimension you're playing.

If you’re already at the final dimension (4th) the warp canisters will have no further effect when the challenging stage is over. Later on a special type of canister with a different color may be released by the last enemy in any formation, for which you get the triple ship instantly regardless of the actual ship status. That definitely helps since later levels are often too hectic to safely pursue the triple ship, and here’s where most of the difference from the original arcade game lies. No matter how far you are in your warping journey, on the PC Engine things never get too overwhelming if you’re beaten down to a single ship. Other significant differences are the reduced number of dimensions (4 here, 5 originally) and the fact that you get different bosses in stage 10 depending on which dimension you are. Note: score extends are achieved with 50, 140, 300 and 480 thousand points. Hint: whenever you take a warp canister you become invincible for one or two seconds.

Aiming for more points goes hand in hand with reaching higher dimensions, but you can also work on a few other details to improve your performance. Perfecting the galactic dancing bonus levels is important because if you manage to kill all 40 enemies you get increasingly higher rewards, starting from 10.000 points in the first bonus area. Other sources are those bigger escort/leader bugs, bugs that split into secondary bugs, lemon bugs (lemon-shaped ones that shower down in pieces once hit) and falling debris in scrolling areas. As a rule of thumb, the more bugs you allow to stand in formation the more scoring opportunities you have, and that’s where most of the risk/reward balance is the further you advance in the game. Finally, each life in reserve upon game completion is worth 10.000 points.

As I mentioned above, fixed vertical shooters are rarely as fun as Galaga ’88, especially the older ones. It's a great treat even if you don't like the style that much. Upon completing the credit (no continues allowed) you’re shown a map with your progression across dimensions throughout the game. I finished my best 1CC attempt in dimension 4 with the following completion score (using a turbo controller for proper autofire): 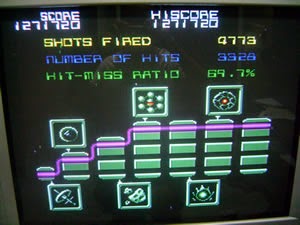