Normally the life cycle of any video game with an arcade origin starts in the arcade itself, which then pours down across different platforms as ports with varying degrees of success. Thunder Force AC, however, is one of the very few examples of an arcade title that originated from a console game. Given the massive success of Thunder Force III, it didn’t take long for Technosoft to turn the Mega Drive hit into a full-blown arcade board running on Sega’s System C2 hardware. The good news for us who don’t own an arcade set-up is that five years later the game would receive a perfect port in the Thunder Force Gold Pack 2 compilation for the Sega Saturn, which also includes the console follow-up Thunder Force IV.

I reckon many people must wonder about the benefits of having a console game running in arcade hardware. In which ways has the game been improved over the original supposedly limited mold? Is it the same experience? Is it worth it even if I own and have played the Mega Drive cartridge to death already? Technosoft’s portfolio in the arcade scene isn’t large by any means (the only other arcade game they developed is Hyper Duel), so at least we can assume this wasn’t just another instance of a developer cheaply milking its golden baby for a little more profit. Plus we all know the Thunder Force brand carried on with several other chapters in what eventually became one of the greatest shmup franchises ever.

Gameplay rules are exactly the same from Thunder Force III. Shoot with button B, switch speeds with button A and switch weapons with button C. Weapons are acquired or upgraded by taking alphabet-coded items. Upon death you lose the weapon you were currently using with the exception of the default ones, upgraded by taking a red S (sever, gives laser capabilities to the forward gun) and L (lancer, increases power of the back-fire). New weapons appear as F (fire, drops crawling bullets above and below the ship), W (wave gun) and H (hunter, weakier homing energy balls). A blue S activates a shield that can withstand 3 hits, the “claw” item adds two rotating options that enhance firepower + also serve to absorb bullets and a small ship (1UP) adds one extra life to the stock. 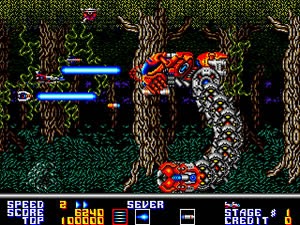 Both games are graphically equivalent and excel at providing great horizontal shooting rush with high flexibility on weapons and maneuvering (a gameplay staple of the series), but even if I had been exposed to Thunder Force AC first I believe I would still prefer Thunder Force III. The differences are in the details and in the fact that the changes Technosoft applied on AC weren’t in any way better than what already existed in the Mega Drive original. Assuming the reader is somehow familiar with Thunder Force III, allow me to bullet-list the main changes in Thunder Force AC:


I can also point minor changes that make Thunder Force AC a little less dynamic than its Mega Drive counterpart. Those intro screens in each stage were one of the coolest aspects of Thunder Force III, since they blended with the music as the levels started against the awesome backgrounds. The slower tempo of the soundtrack in AC is also another lessening factor, especially if you’ve already been previously exposed to Thunder Force III. It’s still very good though, the only letdown being the comparatively weak theme for the new outer space level.

When the first five planets/levels have been cleared the player proceeds to challenge the Orn empire by fighting a huge battleship, scrambling inside their motherbase and finally destroying Orn’s core. Besides a few tweaks here and there, these final stages haven’t changed much and are still what keeps the game from reaching a higher accomplishment grade. As for the gameplay tweaks in general, they’re actually the main reason why fans of the series should try Thunder Force AC. Different enemy placement and formations, stronger enemies/bosses and new environmental hazards should guarantee the fun for both newcomers and seasoned Thunder Force III players alike.

From Ellis to Orn's base
(courtesy of YouTube user Ace9921)

With a good number of extra lives to be collected throughout the game and three score-based extends (at 30.000, 100.000 and 200.000 points), Thunder Force AC is still an easy clear, especially for arcade difficulty standards. That said, the main challenge shifts to beating the game with the maximum possible amount of lives left in order to get that bulky completion bonus of 100.000 points for each spare ship (totalling 1,1 million for 11 lives if you don't die). That certainly requires hefty memorization, smart management of shields and proper usage of the speed switch (I use every speed at least once per credit).

As an advantage over the raw arcade experience, the port included in the Thunder Force Gold Pack 2 comes with four difficulty levels (Mania too, access options by pressing A + START) and an extensive arcade-like bookkeeping info (press Z and navigate with Y/Z). There’s even a so-called “kids mode” that preserves all your weapons and power-ups upon death and resumes the next life with a 1-hit (red) shield. Overall, a nice animated intro sets the mood perfectly for some of the finest 16-bit shooting action you can get with no slowdown or technical hindrances of any kind.

Besides Thunder Force AC, the legacy of Thunder Force III also spans the SNES, which received a proper port based on AC titled Thunder Spirits shortly after the arcade release. My best high score for Thunder Force AC is below, having beaten the game without losing any lives (Normal difficulty). 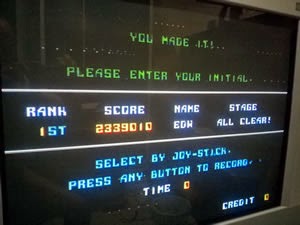